Manchester United were back on top, restored to the summit of the English game, reaching a historic high. When their financial results were released last week, their wage bill, of £384.2m, was the biggest ever in the Premier League.

As it came in their worst season since the 1980s, when they finished 35 points behind their neighbours and as close to Watford as to Manchester City, it showed the cost of failure has never been higher.

United reclaimed their title as big spenders in the summer; given the inflated fees, it might be wrong to say they brought in £200m of players, but they did pay out £200m. Meanwhile, Manchester City made a transfer-market profit and signed a striker, in Erling Haaland, who now has 11 goals in his last six games.

The Manchester derby is the moneyed derby nonetheless. It is a generalisation to state that, since Sir Alex Ferguson retired, both have spent a fortune, City well and United badly, but there is some truth in it. They will not be erecting statues of Wilfried Bony or Eliaquim Mangala outside the Etihad Stadium but whereas United’s £1bn splurge has arguably only yielded one unqualified success, in Bruno Fernandes, City’s annual nine-figure outlays have produced several, with Kevin De Bruyne topping the list. This summer, they were also far better sellers than United.

But if expenditure can be analysed individually, and if so it is worth noting that Kalvin Phillips’s 13 minutes of football mean he has scarcely delivered value for money so far, while Jack Grealish’s £100m fee means he has not either, the broader test is collective. City have five Premier League titles since Ferguson retired, United none. Since United’s last trophy, the 2017 Europa League, City have won 11.

The eventual verdict may be that, like Pep Guardiola before him, Erik ten Hag initially paid over the odds to secure signings who would be transformative in the framework of his blueprint, or that United’s scattergun spending continued to create problems for a very different successor. It is too soon to say.

Sunday instead will be a barometer of progress, a test of a revival. United’s victories over Liverpool and Arsenal owed something to the losers’ flaws but were genuinely encouraging nonetheless.

The Etihad Stadium has a curious status for United; they can win battles on enemy territory but, over a season, comprehensively lose the war. They have won four of the last six meetings on City soil and yet two of the post-Ferguson reigns started to unravel there. David Moyes had a solitary defeat before a September 2013 visit. It proved particularly chastening for Marouane Fellaini, his lone recruit by then, as United went 4-0 down in 50 minutes. United lost at home to West Bromwich Albion six days later and Old Trafford’s air of invincibility started to be pierced.

Rewind to March and Ralf Rangnick travelled across Manchester with a more-than-respectable haul of 26 points from 13 games. Another 4-1 defeat started another downward spiral. It reflected justified fears of City’s midfield supremacy. Cristiano Ronaldo was absent, injured and in Portugal, but had been dropped anyway as Rangnick preferred two false nines, in Paul Pogba and Fernandes.

Ronaldo forms part of the backdrop. United’s wage bill would not be so colossal were he not the best-paid player in the country. It is little over a year since City’s surreal flirtation with him prompted United’s delusional coup of re-signing the veteran; such long-term planning as may have existed at Old Trafford might have consisted of Ole Gunnar Solskjaer luring his former Molde charge Haaland to be the future of United’s attack, but one Norwegian was sacked long before another opted for City.

If Ronaldo gets a cameo, it will be his first derby at the Etihad since a 2008 red card but City can savour the symbolic sight of United possessing the past and them fielding the future. Ronaldo is an emblematic figure: over the last nine years, City have allied vast resources with greater strategy and more continuity, fewer knee-jerk reactions and lacking the same addiction to big names or tendency to lumber themselves with debilitatingly big contracts for the elderly. Their squad suits the manager they have.

Meanwhile, United’s accounts made still more unpleasant viewing because of pay-offs to sacked managers. Ten Hag will be the third Guardiola faces in as many derbies. Last November’s 2-0 victory at Old Trafford was more emphatic than the scoreline suggested. 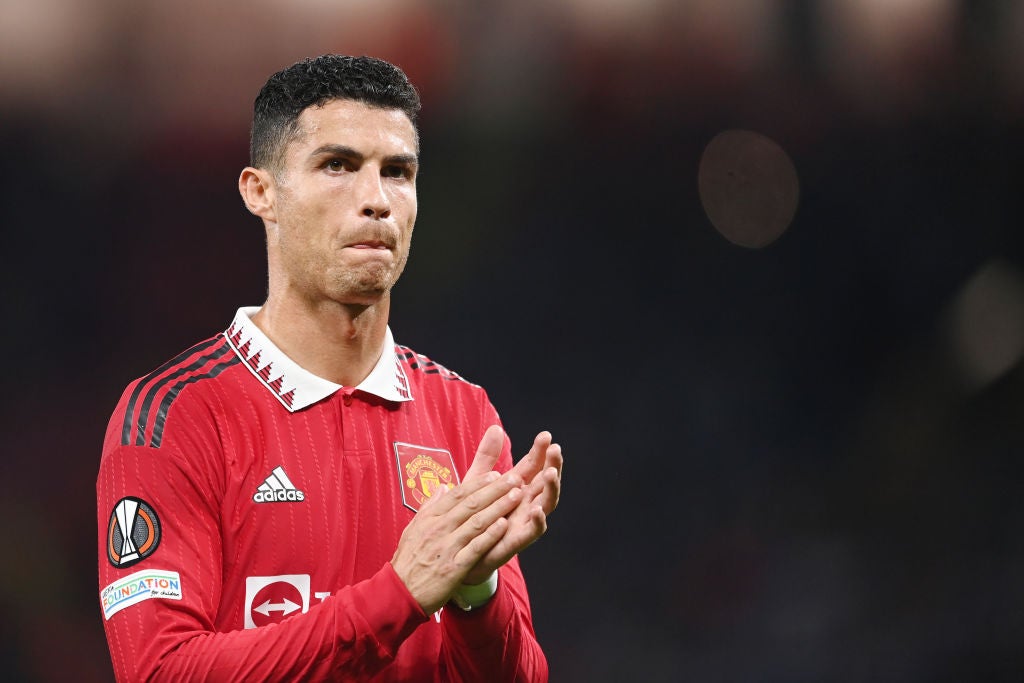 If Cristiano Ronaldo gets a cameo, it will be his first derby at the Etihad since a 2008 red card (Getty Images)

He saw off Jose Mourinho without the bitterness that characterised their rivalry in Spain. Solskjaer seemed his opposite, under-qualified and over-promoted, but shaped up as his unlikely nemesis, albeit only over 90 minutes. Only Jurgen Klopp and Mourinho have beaten Guardiola more than Solskjaer did. Three of his four wins came at the Etihad Stadium. United had 39, 34, 28 and 27 per cent of possession respectively as they prevailed.

If Ten Hag was supposed to be their ideologue, a manager from another branch of the Ajax family tree, given Guardiola’s devotion to Johan Cruyff, there has been a pragmatic element to recent progress. Only one of their four consecutive league wins, at Southampton, came with a majority share of the ball, and not by much. United had just 29.5 per cent against Liverpool.

The Solskjaer formula based around counterattacking pace remains United’s best chance. The side furnished with £200m of new arrivals have to play like underdogs. But, as usual in modern Manchester derbies, they are underdogs.