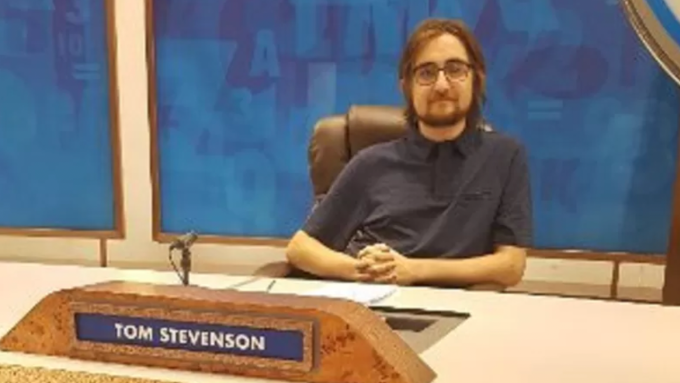 Audiences have been gasping every day this week as Countdown contestant Tom Stevenson broke two records on the 40-year-old show.

The 21-year kept his nerve for the final Countdown Conundrum – solving a nine-letter anagram – despite the host reminding him of the significance of the occasion.

He was given the letters UNLETOVER – and solved it in just three seconds.

(ANSWER AT BOTTOM OF PAGE)

Countdown was the first programme to ever air on the UK’s Channel 4, and now as it turns 40, the show has sprung up a phenomenon.

University student Stevenson broke two records on the teatime quiz show – totting up a record score of 154 points and becoming the first ever contestant to get through to the final without dropping a single round along the way.

Here’s Tom in action along the way…

If you DON’T want to know what happened on today’s @C4Countdown DO NOT watch this!

Regardless of result, thanks Tom for being a lovely contestant. See you in the battle for series title!

Stevenson, who first started watching Countdown when he was at school and found it a balm for his agoraphobia, now goes through to the final at the end of the year.

Countdown was the very first show to be aired on Channel 4 on November 8 1982, when it was launched as a commercially-funded fourth channel in the UK.

(The Countdown Conundrum was: VOLUNTEER)