Chance of being diagnosed with some neurological and psychiatric conditions two to three times higher after Covid than for other respiratory infections, according to research 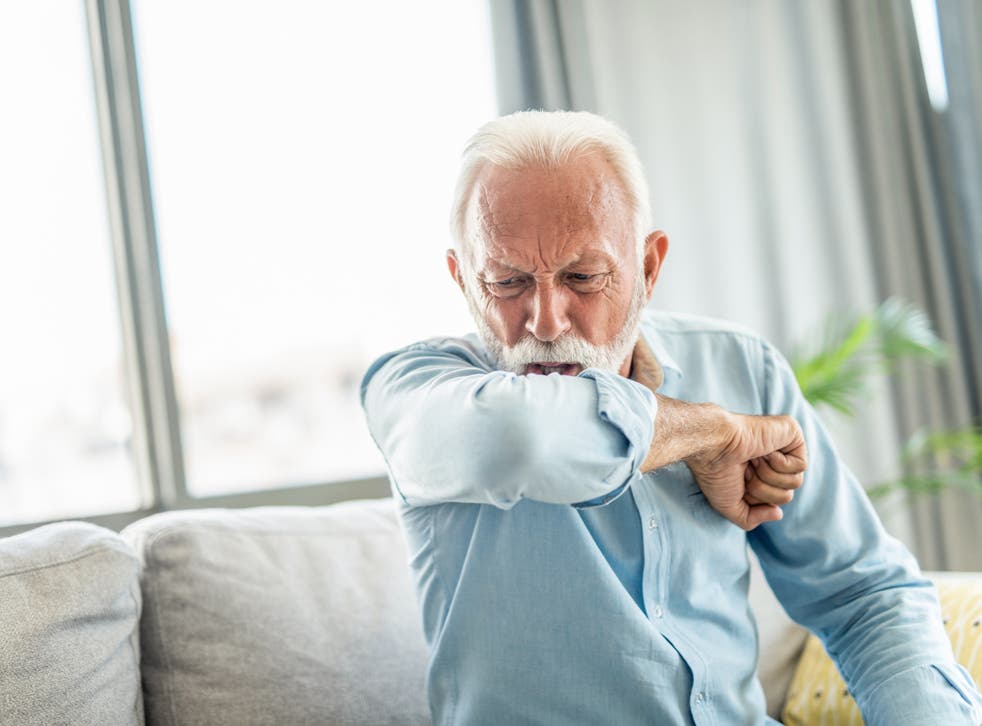 Covid-19 patients face an increased risk of dementia, brain fog and other neurological conditions up to two years after an infection, a major new study has shown.

Researchers from the University of Oxford reviewed the health records of more than 1.25 million patients and analysed data from 14 neurological and psychiatric diagnoses, alongside different types of Covid infections.

They found that, over a two-year period, the chance of being diagnosed with various neurological and psychiatric conditions is, in the worst cases, two to three times higher after Covid than for other respiratory infections.

The research, published in the Lancet Psychiatry, also showed that children face a two-fold increased risk of epilepsy and seizures: 260 in 10,000 under-18s develop the conditions after Covid, compared to 130 in 10,000 following another respiratory infection, according to the paper.

However, the likelihood of most neurological and psychiatric diagnoses after Covid-19 was lower in children than in adults, the researchers added.

Professor Paul Harrison, lead author of the study, said: “The results have important implications for patients and health services as it suggests new cases of neurological conditions linked to Covid-19 infection are likely to occur for a considerable time after the pandemic has subsided.

“Our work also highlights the need for more research to understand why this happens after Covid-19, and what can be done to prevent or treat these conditions.”

Dr Rachel Sumner, a senior research fellow at Cardiff Metropolitan University, who was not involved in the research, said the study shows “another layer of potential future harm for health services across the world.”

She added: “Long-term effects of Covid will cause longer-term economic harm in the form of extensive health service utilisation and employment absenteeism or even unemployment, which is a risk for some that are most affected by the conditions highlighted in the study.

“It is also of concern that patients that experience Covid and go on to develop some of these disorders will continue to have delays in diagnosis and treatment with healthcare systems that are struggling to deal with both Covid infections and backlogs of patient waiting lists.”

The study analysed data on 14 neurological and psychiatric diagnoses taken from the health records of 1,284,437 patients in the US who had a confirmed Covid infection on or after 20 January.

The study showed that adults aged 18-64 who had Covid-19 up to two years previously had a higher risk of brain fog and muscle disease, compared to those who had other respiratory infections over the same period. In adults aged 65 and over, there was a higher occurrence of brain fog, dementia and psychotic disorder.

Among the over-65s, there were 450 new diagnoses of dementia per 10,000 people s within two years of a Covid infection, compared to 330 cases for the control group.

Dr Max Taquet, who led the analyses for the research, said it was “very clear that this is not a tsunami of new dementia cases” but argued that it was too “hard to ignore” the paper’s findings “given the severity of the consequences of dementia diagnosis”.

Prof Harrison said the numbers for new neurological and psychiatric diagnoses after a Covid-19 infection were “not trivial” and “need to be set against the increasing burden of mental health problems … that may have occurred in the whole population because of the pandemic.”

The study also found that, in adults, the risk of being diagnosed with depression or anxiety initially increased following Covid-19 but, after a relatively short time, returned to the same levels seen with those infected by a different respiratory pathogen. Children were also deemed not to be at greater risk of anxiety or depression after Covid.

The emergence of the Delta variant was meanwhile associated with significantly higher six-month risks of anxiety, insomnia, cognitive deficit, epilepsy or seizures, and ischaemic strokes, but a lower risk of dementia when compared to those diagnosed with Covid-19 with just before the Delta wave. Omicron leads to similar risks, the researchers added.

“It is good news that the higher risk of depression and anxiety diagnoses after Covid-19 is relatively short-lived and there is no increase in the risk of these diagnoses in children.

“However, it is worrying that some other conditions, such as dementia and seizures, continue to be more frequently diagnosed after Covid-19, even two years later.”

Acknowledging the limitations of the study, the researchers said the results likely underrepresented people with mild or asymptomatic Covid. They added that the paper does not explain how Covid elevates the risk of developing a neurological and psychiatric condition.

Pictured: Woman, 65, who was mauled to death in dog attack - as police destroy five American bulldogs and arrest man, 31

8 best travel cots for fuss-free bedtimes away from home

'Did you need to spend...' - Sky Sports man baffled by £20m Edens move at Aston Villa

Sky Sports’ presenter Joe Thomlinson has questioned the reason why Aston Villa signed Philippe Coutinho. Since Steven Gerrard has been at the helm at Villa Park, a lot of exciting signings have been made, costing the club’s owners £90m, with the likes of Boubacar Kamara, Diego Carlos and Coutinho joining ...

Has the mystery of how the moon formed finally been solved? Our lunar satellite was propelled into orbit IMMEDIATELY after a giant impact between Earth and a Mars-sized planet 4.5 billion years ago, study claims

Scientists suspect moon was created when a planet called Theia struck EarthBut the nature of collision and what happened after has been subject to debateSome believe collision created debris which coalesced into the moon over timeIn a new study, researchers ran the most detailed supercomputer simulations yetFindings suggest the moon was placed into orbit around Earth immediately


View more: Has the mystery of how the moon formed finally been solved? Our lunar satellite was propelled into orbit IMMEDIATELY after a giant impact between Earth and a Mars-sized planet 4.5 billion years ago, study claims

Death of father-of-two, 57, who was fatally trampled by a herd of cows while walking dogs with his wife will be probed by an inquest

Michael Holmes, 57, was trampled by cows while walking his dogs in 2020Father-of-two's death will now be subject to an inquest to provide answers His widow Teresa suffered life-changing spinal injuries in the same tragedyMr Holmes was the third person to be fatally trampled by cows in a month


View more: Death of father-of-two, 57, who was fatally trampled by a herd of cows while walking dogs with his wife will be probed by an inquest

Gonzalo Higuain wept as the Argentine striker announced he will retire from professional football at the end of the MLS season. The 34-year-old, whose career has seen him grace the top flights in Spain, Italy and England, will hang up his boots at the conclusion of Inter Miami’s campaign. Higuain ...


View more: Gonzalo Higuain breaks down in tears as he announces end to record-breaking career

Sadiq Khan has pledged to push ahead with a commission on whether to legalise cannabis, despite Labour leader Keir Starmer being firmly against the move. On a trip to the US in May, the Mayor of London said an ‘honest conversation’ about the UK laws against cannabis needs to happen. ...


View more: Sadiq Khan 'prepared to go against public opinion' on legalising cannabis but Keir Starmer could block it

Sam Gillingham appeared on This Morning to talk about her mother's murderRussell Causley murdered Carole in 1985 but never revealed location of bodyAs Causley, now in his 80s, applies for parole, Sam said he should never be freed


View more: Woman whose father murdered her mother in 1985 but won't reveal where he buried her body says he should NEVER be freed from prison as he prepares for his parole hearing

Heathrow Airport is scrapping its daily cap on passengers following a difficult summer. The airport limited the number of passenger departures at 100,000 a day in July and in August extended the cap until October 29. The move was designed to limit queues, baggage delays and flight cancellations after many ...

Burglars jailed for life for killing man in cannabis factory in £100,000 drug raid

Two burglars who killed a man during a bungled bid to snatch nearly £100,000 of drugs from a cannabis factory have been jailed for life. Shaddai Smith, 32, and Jason Sebran, 38, were found guilty of murdering 21-year-old Renato Geci and wounding his brother Vilson Geci, 29, after they broke ...

Carer's Allowance: 8 vital changes claimants must report - ‘could be taken to court'

Royal Navy engineer, 23, 'violated' a male colleague by 'grinding' against his bottom and kissing his neck, court martial hears

London Underground: Why so few Tube stations are south of the River Thames

'Keep out of trouble!' Motorists warned of uncommon driving laws that lead to fines

Mum's heart-breaking tribute to 'gorgeous son', 21, murdered after being chased by men

Video: Post-apocalypse clear up continues: More than half a million homes and business are STILL without power as National Guard delivers essential supplies after Hurricane Ian flattened huge swathes of Florida and death toll climbs past 100

Video: Why Carrie Bickmore is banning her primary school children from getting a mobile phone as experts link excessive screen time with depression - so do you agree with her strict parenting?

Post-apocalypse clear up continues: More than half a million homes and business are STILL without power as National Guard delivers essential supplies after Hurricane Ian flattened huge swathes of Florida and death toll climbs past 100

BBC EastEnders: What the original Lauren Branning looks like now as Jacqueline Jossa 'returns' to soap

Scientists propose surprising new theory for how the Moon was formed

Video: Covid inquiry 'will NOT drag on for decades': Baroness behind probe into No10's pandemic failings says goal is to prepare country before 'another disaster strikes'

Video: Confronting moment ambos fight to save a man who overdosed in a 'drug den' carpark next to a heroin injecting room - as his mate also collapses to the ground

'Sorry Matty, we're not changing!': Defiant NRL insist the Grand Final WILL continue to be played on Sunday nights after Matthew Johns said the league could LEARN from the AFL

Dancing on Ice 2023: Meet the cast as first contestants announced

Twitter starts rolling out its EDIT BUTTON to Blue subscribers in Canada, Australia and New Zealand - letting users edit their tweets up to five times in the 30 minutes after posting

Barristers to vote on whether to end strike action

‘Three-peat’ La Niña Predicted; Forecasters Say This Is the Third in a Row for the Pacific Ocean To Be in This Weather Cycle

15 Foods That May Help Flatten Your Belly

Video: Has the mystery of how the moon formed finally been solved? Our lunar satellite was propelled into orbit IMMEDIATELY after a giant impact between Earth and a Mars-sized planet 4.5 billion years ago, study claims

JJ Watt returns to field just THREE DAYS after having his 'heart shocked back into rhythm,' as Cardinals take on Panthers following the defensive star's health admission on Sunday