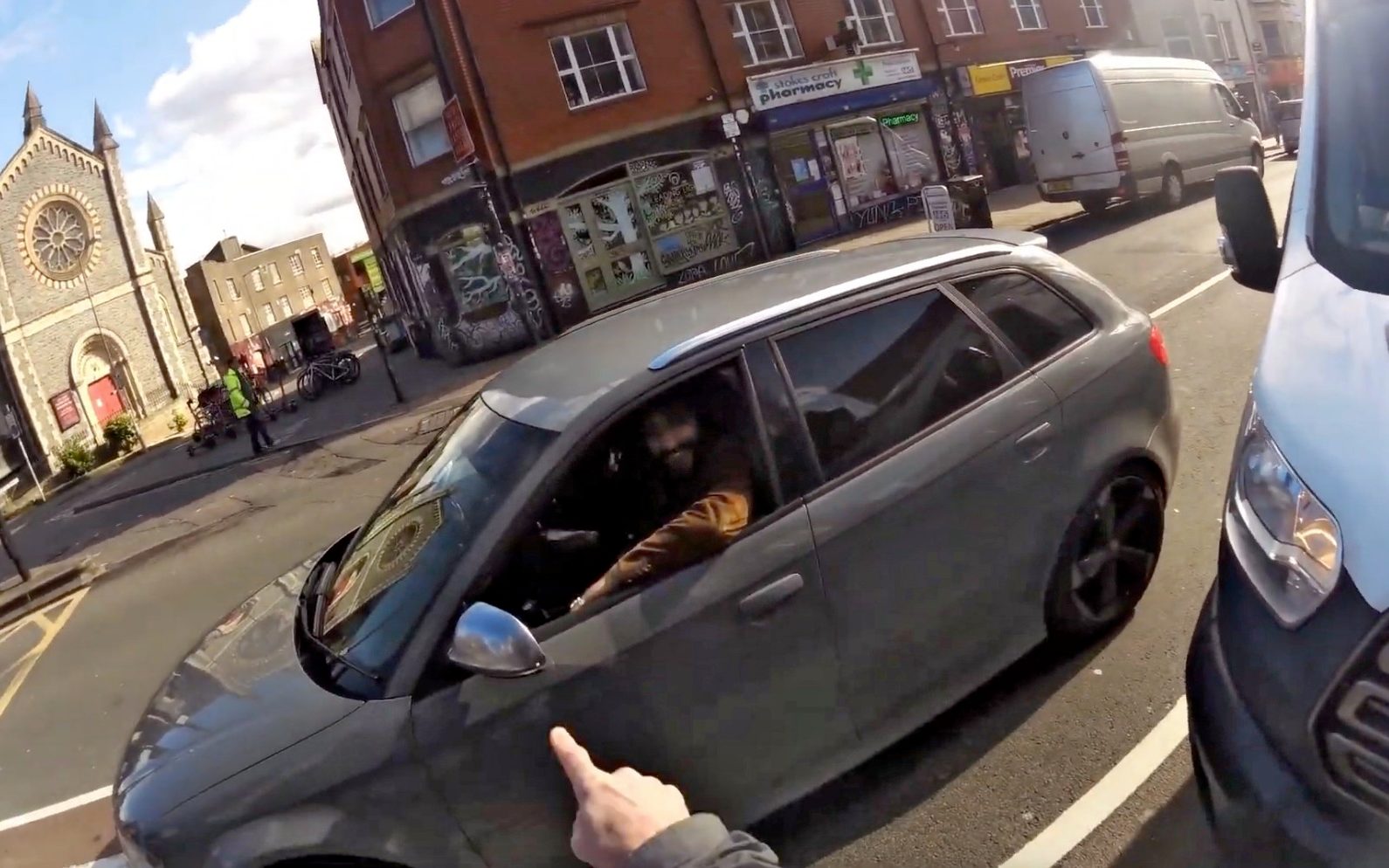 Cycling campaigners have secured the dropping of a criminal case against a man who was snaring drivers allegedly using their mobile phones with his helmet-mounted camera.

Tom Bosanquet, 43, stopped in the road at a set of traffic lights after spotting a man purportedly using his phone at the wheel of a vehicle.

Footage from his camera reveals he challenged the driver before a brief conversation between the two led to a momentary hold-up in traffic.

However, Mr Bosanquet was later prosecuted by Avon and Somerset Police for “inconsiderate cycling” during the incident in Bristol.

The case was due to go for trial at North Somerset Magistrates Court on October 7 but was dropped by the Crown Prosecution Service (CPS) after a review found it to not be in the public interest.

In a statement celebrating the legal win, Cycling UK said the brief delay to traffic which was the focus of Mr Bosanquet’s alleged wrongdoing lasted only a few seconds.

However, a van driver stuck behind the debating cyclist and driver honked his horn before “accelerating through a red light and without leaving the required 1.5m space”.

Mr Bosanquet said the legal ordeal had left him feeling “shaken” by the saga.

“This case has been a long, drawn-out and stressful process, and as the first run-in I’ve ever had with the law, I’ve felt shaken by it,” he said.

“The attempted prosecution was heavy-handed and inappropriate, something borne out by the case now being dropped.

“I am relieved now to move on from this episode, wiser but undaunted in my desire for the ongoing safety of all vulnerable road users.

“Throughout I’ve been humbled by the support shown to me both by individuals and groups such as Bristol Cycling Campaign, and particularly grateful to Cycling UK’s Cyclists’ Defence Fund which was there to take my side and support me.”

The fund comes entirely from donations and is run by Cycling UK, and money from the pot has now been used in four cases, including that of Mr Bosanquet, over two decades.

In all instances, the cases have either been successful appeals or dropped by the CPS.

Cycling UK win: The Crown Prosecution Service has dropped a case against cyclist Tom Bosanquet. He was prosecuted for delaying traffic for a couple of seconds, when he challenged a driver who was using his phone while stopped at traffic lights, which is a criminal offence. (1/2) pic.twitter.com/ogOApoCj8e

Sarah Mitchell, Cycling UK’s chief executive, said of the latest case: “It’s somewhat ironic that Mr Bosanquet was prosecuted in the incident when he was using a helmet camera to catch footage with the intention of supporting the police collect evidence of bad behaviour on our roads.

“This is something that police forces across the country have expressed they welcome from the public, and any negligible delay to traffic was caused in part by this.

“Cycling UK believes the police should never have referred the case to the Crown Prosecution Service, so we’re pleased it’s now been dropped. Going to court would undoubtedly have been a waste of resources.”

Growing disquiet between cyclists and drivers has led to a change in the Highway Code, where cyclists get more protection and there is also a proposed new “death by dangerous cycling” law to hold bike users more accountable.

Official figures for 2019 show that there were five pedestrian deaths involving a cyclist. However, in the same year 48 cyclists and 305 pedestrians were killed by cars, Department for Transport figures show.

Grant Shapps, the former transport secretary, said in August that bicycles should have number plates and may be subject to a 20pmh speed limit.

A CPS spokesman said: “When we reviewed this case, we concluded that our legal test for a prosecution was not met.”

A spokesman for Avon and Somerset Police told The Telegraph: “We are grateful to all members of the public who submit footage detailing suspected road traffic offences and incidents through our website, as it greatly helps us carry out effective investigations.

“Before submitting footage, we do make clear that ‘if it is identified that the person submitting the footage has also committed an alleged offence, they may also be prosecuted’.

“The CPS has decided not to proceed further with this case in relation to an incident from March 4 2021. We recognise and accept its decision.”

Bill Cosby is sued by five women for 'drugging, groping and raping them' as far back as 1969 - as survivors take advantage of a new window of opportunity to file historic cases

We wish you a DELICIOUS Christmas! Spread a little festive joy with these quick bakes you can give as gifts or share with those you love

Stormont Assembly set to be recalled amid powersharing impasse

In the supermarket and on the farm, hungrier times lie ahead

EXCLUSIVE: Ex-Channel Nine star Cameron Williams breaks cover in an oversized polo shirt as he suddenly puts the bush retreat where he allegedly assaulted his wife on the market

Strep A: Pharmacies warn of penicillin shortage as parents urged not to self-diagnose their children

When Nina Hayton saw a government advert for pension credit payments in August, she thought that her prayers had been answered. The 72-year-old former farm secretary, from South Petherton, Somerset, was desperately worried about how she would afford to heat her home this winter, as energy bills soar. If she ...

Police hunt wanted man - and women want to find him too!

Robert Rimmer, 36 Police are appealing for help to track down a man wanted in connection with an investigation into drugs-related offences. Robert Rimmer has connections to Cheshire, as well as Manchester, Hull, Liverpool and Blackpool. Humberside Police have shared a picture of Rimmer and have warned the public ...


View more: Police hunt wanted man - and women want to find him too!

An adorable stray dog with a wonky nose has found his forever home after being rescued as a stray in Qatar. Now named Alan, the boxer-saluki mix, suffers from a facial deformity known as “wry mouth,” which causes his upper jaw to deviate to one side, giving his face a ...

'An amazing lift to Boro': News of trendy STACK pop-up in Middlesbrough gets warm welcome

The recent announcement has sent Teessiders into a frenzy The news that one of Newcastle’s most popular entertainment venues is heading to our region has proved a hit with Teessiders. Known for its shipping container aesthetic, for years crowds have flocked in droves to the STACK venue, known for ...

Two artists are forcibly removed from Art Basel in Miami after MILKING a woman's breasts and auctioning off the milk for $200,000

OONA and Lori Baldwin staged an impromptu exhibit after their performance Milking the Artist was deemed 'too controversial' at Miami Art Basel In front of a crowd of 300, the two artists milked OONA's breast, which appears to be prosthetic, and auctioned it offThe first glass sold for 50 Ethereum, or $64,000, and the second glass sold for 158 Ethereum, or $200,000 The artists said the performance piece is used to question the 'general obsession with objectifying women'OONA and Baldwin were escorted from the building after the exhibition


View more: Two artists are forcibly removed from Art Basel in Miami after MILKING a woman's breasts and auctioning off the milk for $200,000

She’s making a career comeback after returning to the spotlight with a gig on US TV show Ink Masters. And Ruby Rose took a break from filming her latest movie Dirty Angels in Greece on Monday. The Australian beauty,  36, puffed on a cigarette as she wrapped up warm for the ...


View more: Ruby Rose puffs on a cigarette during filming of Dirty Angels in Greece as she makes a return to the spotlight following a string of poorly-received blockbusters

Mars to disappear behind the Moon this week

Video: Age-defying Sonia Kruger, 57, shows off her abs in a $950 crop top as Christian Wilkins flaunts his muscles in a corset as they lead the arrivals at the 2022 AACTA Awards in Sydney

'Margot... you are so loved our beautiful baby girl': Billie Shepherd finally reveals the name of her third child with husband Greg - five days after giving birth

Let the battle commence! Aaron Judge 'has $360million contract offer' from the San Francisco Giants... after the Yankees 'put $300m on the table' to keep their star outfielder in The Bronx

Video: Lisa Rinna, 59, takes the plunge in a slinky black gown as she transforms signature shag into an edgy pixie cut for the People's Choice Awards in LA

Antibiotics could be given to pupils en masse as health chiefs look to control outbreaks of Strep A in primary schools after girl, 5, became the ninth child to die from the infection this winter

Australian billionaire snaps up CWP Renewables for over $2.7 billion

Sussex town has the second-highest proportion of smokers in UK, study finds

PICTURED: Twelve people wanted by Dorset Police - have you seen them?

Faye Winter dazzles in a silver gown as she and Teddy Soares look as loved-up as ever at the afterparty for the Avatar: The Way Of Water world premiere

My Daily Horoscope: What does December 7th 2022 bring for MY star sign? Oscar Cainer tells all

Gary Neville responds to fans who mocked him over Spain comments

Carmen Electra, 50, shows off ample bust in a tiny rhinestone bra top as the ageless sex symbol joins stars at the People's Choice Awards in LA

Return of Elgin Marbles to Greece would be a ‘dangerous and slippery road’, warns Culture Secretary

Video: All aboard the Dart! King Charles shakes off 'egg attack' and beams as he rides energy-efficient cable car in Luton after taking charge in the control room

Jaguar SUVs worth at least £260,000 go up in flames on the side of the M1 after huge fire breaks out on transporter near Nottingham

'Gloves are off' as King has options if Harry and Meghan attack Royals, says expert

Video: Kim Kardashian and daughter North West, 9, make adorable TikTok together as youngster tells her mom: 'My heart fell in love with you'

Video: Man, I feel like a new woman! Shania Twain unveils VERY youthful look at 57 in wild sheer dress and millennial pink hair as she leads the stars on red carpet at People's Choice Awards 2022

Video: Chrishell Stause is a showstopper in a sparkling sheer nude dress at the 2022 People's Choice Awards in LA