DAME Deborah James’ mum has defied her daughter’s wishes and read the final two chapters of her book, two months after she died.

Heather said the “emotional” last pages were written at her home in Woking, Surrey, where Deborah spent the last eight weeks of her life. 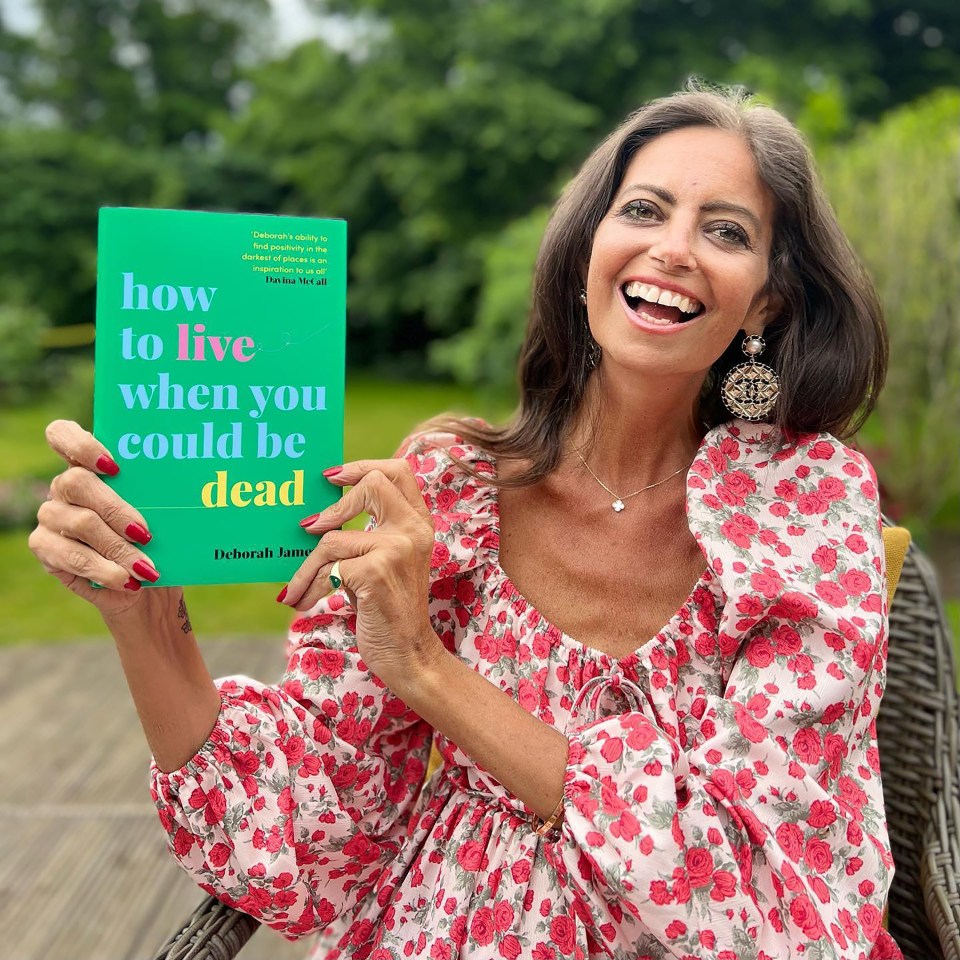 How To Live When You Could Be Dead is out todayCredit: Eroteme 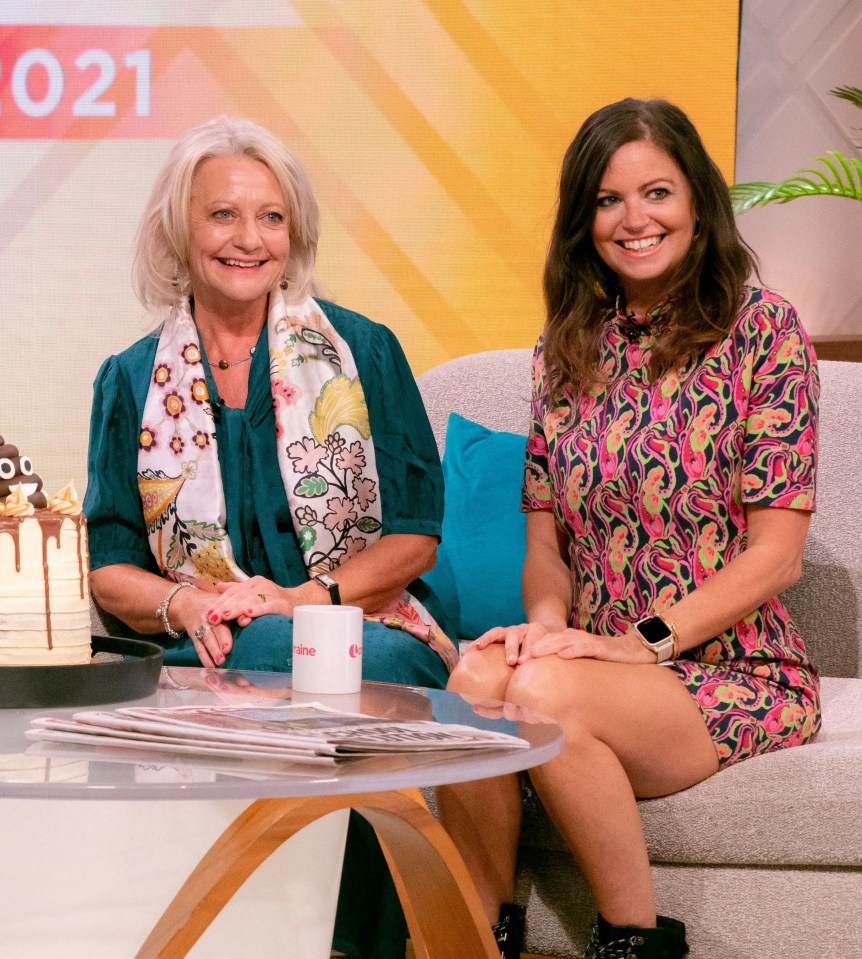 Heather appeared on Lorraine, where she had previously sat with her daughter, DeborahCredit: Rex

How To Live When You Could Be Dead – a memoir and book filled with Deborah’s fighting spirit – has been launched today.

It comes two months after Deborah, a Sun columnist, died of incurable bowel cancer, aged 40, having spent five years of her life raising awareness of the disease after a shocking diagnosis.

Heather appeared on ITV’s Lorraine this morning to proudly speak about the book, having previously sat on the sofa with her daughter.

Presenter Christine Lampard asked Heather if she had read the last chapters of Deborah’s book, which the Dame had asked her not to.

Heather replied: “I've read the last chapters now, and they are very emotional.

“But very, very good advice to the children as well.”

The Sun exclusively published extracts of the book, which included a poignant letter to her two teenage children, Hugo and Eloise, and husband, Sebastien.

Heather revealed these were written by Debs when she was close to death, at which point she was no longer able to walk.

The book publication was brought forward, originally due to be released next year.

But Debs said in May she was “gutted” she wouldn't see it on shelves, adding: “It’s all about mindset and how the learnings of a positive mindset might help you even in the darkest moments.”

Heather said: “Two years she's been writing it, but the last two chapters, which are quite emotional for me to read, were done at our house in the last few weeks of her life.

“Not the ending she expected when she started the book two years ago, but she didn't know how long she would have and she had two extra years, which was amazing.”

Asked how she was coping, mum-of-three Heather said she was finding it harder as the days went on – but that she would continue to raise awareness about cancer without Deborah by her side.

Heather said: “I actually find it harder now, as the weeks go on, because it's been longer since I have spoken to her.

“She should be here doing this, but I'll do it for her, and I know she's with me in spirit, looking down on me and saying ‘mum you can do this’.”

Determined to her last breath

From the moment the ex-deputy head teacher was diagnosed with cancer in 2016, she put all her energy into raising awareness of cancer – with statistics proving the sheer impact she had.

In true Deborah style, the cancer campaigner refused to slow down toward the end of her life, as Heather said she was “full of energy right up to the last breath she took”.

She finished her book, launched a clothing line and had a rose named after her – with proceedings going towards charity.

Heather said Deborah refused to die without seeing the Bowelbabe fund launched, despite her family promising to do it for her.

The podcaster launched the fund while announcing that she was stopping cancer treatment in May, and within a matter of weeks, it reached £million.

Heather said: “It seems surreal that all this happened in the last seven weeks of her life.

“She would just sort of say I want to do this, and we'd sort of look at her, and we'd think ‘okay’.

“She was still bossing us at the end. And we would make this happen. She was so determined to live every last minute.

“When she said she wanted to leave a legacy, we didn't think she had many days left.

“She wanted so passionately to make a difference to people’s lives, and I think she has.”

The Sun exclusively published heartbreaking extracts of the book before its release, including the letter left Debs left for her husband and two children.

Deb said she couldn’t even speak to Hugo, 14, and Eloise, 12, without crying.

“I want them to realise that life does not always go according to plan,” she said.

“You can make plans, and you can have goals, but you have to be prepared for the fact that sometimes life is more interesting when you go off-piste — so be brave.

“Take a chance and back yourself.

“Remember to be your number one cheerleader.

“Don’t leave the world and all it has to offer until retirement — experience it now.

“Learn to balance living in the now and being present in the moment with your plans for the future (although this may be the hardest lesson of all).

“Marry only for love.”

Addressing Sebastien, Deb wrote: “I fancied him from when I first met him, and I knew I would marry him after our third date.

“If I look across any room 18 years later, I still find him the most attractive man there.

“As cancer brings my life to an end, I feel this cruel realisation that I’m not fully able to be myself with the one person I have adored and needed in my life more than anyone else.

“My husband has always been my rock. He holds me up when I can’t hold myself and wipes away my tears.

“And yet I’ve wondered every day how it must have felt for him when the fairytale marriage he signed up for became a daily struggle to survive and fight for an extra moment of living.

“I’ve wondered how he’s felt knowing he is about to become a widower.

Seb’s voice was the last Deb heard before she died. She described her husband as “her rock”.

Seb told The Sun: “I kissed her on the head. I told her how much I loved her, that I would look after the kids and the last thing I said to her was that I was so proud of her. Then she slipped away.

“She had an incredibly peaceful death, if there was a way to die well, then she managed it.

“At the very end, it was quite spiritual.”

Dame Debs launched this year’s Who Cares Wins awards and was a celebrity judge for The Sun’s 2021 ceremony celebrating healthcare heroes.

9 tips to keep your Thanksgiving free from foodborne illness, according to an expert

Monkeypox has disproportionately impacted Hispanic and Latino men in US

Where are Covid infections rising in the UK? Top 20 hotspots

How sleep apnoea treatment cured a father’s breathing problems, giving him an energy boost and helping him lose 15kg

Revealed: How turning the clocks back may affect your health, from raising your risk of heart attacks to leaving you prone to a car accident

A 10-kilometer asteroid blasted Earth about 66 million years ago, prompting the dinosaurs to become extinct. As per new evidence, the huge Chicxulub impact triggered an enormous earthquake that rattled the Earth for several weeks to months following the impact. Overall energy that is released in this “mega-earthquake” is believed to ...


View more: Learn the Signs of Iron Deficiency and How It Can Zap Your Energy

COVID cases are creeping up in the UK once more, new data has revealed. Figures from the Office of National Statistics (ONS) show that in the last week, 1.3 million Brits have been infected with the bug. That's up from 1.1 million the week before and medics have now ...

One of the largest hospital chains in the U.S. was hit with a suspected ransomware cyberattack this week, leading to delayed surgeries, hold ups in patient care and rescheduled doctor appointments across the country. CommonSpirit Health, ranked as the fourth-largest health system in the country by Becker’s Hospital Review, said ...

Fainting and fatigue may signal onset of variant, experts say


View more: Nine Covid-19 symptoms affecting the fully vaccinated — and signs you may have it

In 2020, individuals reported lower levels of intimacy and relationship satisfaction. The multitude of stressful events could be responsible for this impact.  The COVID-19 pandemic outbreak, George Floyd’s murder, and a contentious US presidential election made 2020 a very stressful year. According to recent studies, these crises may have ...


View more: “Lasting Consequences” – 2020 May Have Harmed the Social Development of Young Adults


View more: 10 Beers That Use the Highest Quality Ingredients

'Our bodies became the main character': Canadian influencer gets real in body-positive post

8 Of The Most Common Types Of Stomach Pain

Mysterious Stream of Thousands of Suffocating Fish Filmed Crawling Along the Sand: How Could This Have Happened?

12 Healthy Recipes to Make With Your Turkey Leftovers

It’s Officially Fall, Which Means You’re More Likely To Be Deficient in These 6 Essential Nutrients—Here’s How To Deal

The secret life of spores

Gray Whale Could Make Atlantic Comeback After Disappearance; Here Are the Clues

Exosome Engineering For The Delivery Of Therapeutic Medications

8 Benefits of Hiring an Environmental Consulting Firm For Your Business

Being Sad and Lonely Accelerates Aging More Than Smoking

Formed Memories in Solid Materials Can Now Be Deformed and Erase, Study Suggests

Is this Lululemon's most versatile tank top? Shoppers think so

15 Mistakes To Avoid With Wraps

The Health Benefit You Didn't Know Pumpkins Had

Health Matters: Houston mother, daughter diagnosed with breast cancer within months of each other

A New Function of the Cerebellum

8 Authentic Mexican Dishes You Can Only Find at Taquerias

The 41 best birthday gifts for him, from a portable fireplace to mountain-shaped whiskey glasses

Why You Should Be Drinking Fair Trade Coffee

US to begin screening travelers coming from Uganda for Ebola

Foods You Should Eat To Ease Endometriosis Inflammation

The U.S. will start screening passengers from Uganda for Ebola as the African nation is dealing with an outbreak