Daniel Andrews has snapped back at a reporter who referenced the care of a patient with a spinal injury similar to the one he sustained last year.

The Victorian Premier made the comments amid climbing criticism of the state’s hospital system due to staff shortages and limited bed availability.

Mr Andrews’ retort came after a journalist informed him about a woman who had a similar ailment to what the Premier sustained after slipping on steps in March 2021.

“A woman had a cracked vertebrae and had to be taken on a stretcher across the carpark at Box Hill Hospital this morning,” the reporter said.

The query triggered Mr Andrews to recall his own injuries and care at The Alfred hospital. 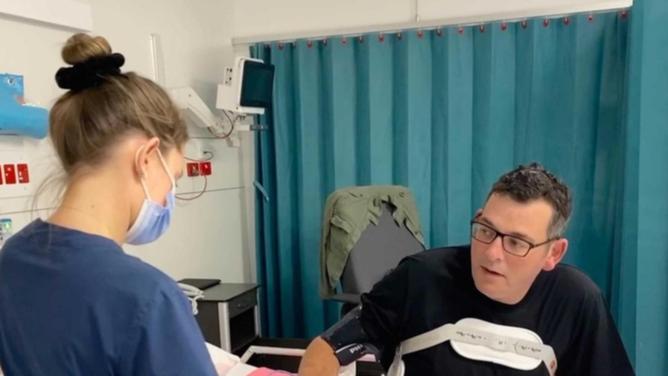 Victorian Premier Daniel Andrews at The Alfred after his 2021 injury. Credit: Supplied

“There’s nothing comfortable about having a broken back, let me assure you of that,” he said.

“As a patient of this hospital, I can assure you that patient, like all patients, spinal injuries are very serious and the teams do their very best, their very, very best to provide care to those people.”

“I can confirm that from personal experience and nothing about that sort of an injury is easy and sometimes there are challenges, but the staff do the best they can to provide the best care to those patients and all patients,” he said.

The Premier suffered broken ribs and spinal damage after falling on wet stairs at a Mornington Peninsula holiday house in March last year.

He later said the injuries left him unable to breathe, let alone call for help. 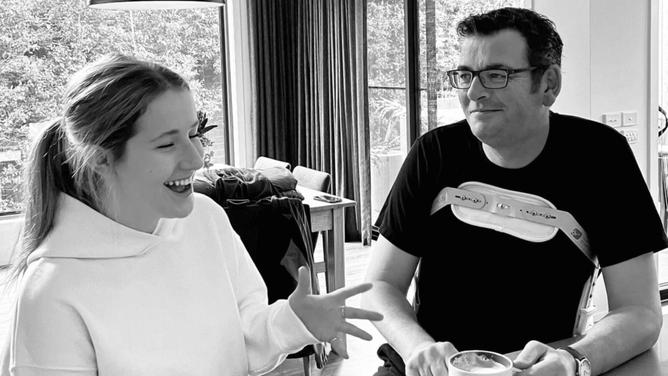 Mr Andrews with daughter Grace while recovering from the injury in 2021. Credit: News Corp Australia

“All I could hear was this almighty crunch. And that’s when I knew … and when I heard the crunch, I thought, ‘This is serious, we’re in trouble here’,” he said.

“Cath must have heard me groaning in pain. I couldn’t yell out. She comes and finds me a few moments later. It felt like an eternity because I couldn’t breathe. I could only take shallow breaths in and out.”

Mr Andrews was rushed to the intensive care unit at The Alfred before taking three months off work to recover.

Victoria’s hospitals have been under increasing pressure since Covid cases began rising towards the end of 2021.

Health services have also had to deal with resurgent flu numbers along with furloughed and sick workers.

Dapper Robert Downey Jr, 57, cosies up to his glamorous wife Susan, 48, as the couple join Kesha for the LA premiere of Decision To Leave

'You're a Karen born with a silver spoon in your mouth': Kanye West brands Gigi Hadid a 'zombie' as he takes aim at the model again in latest rant

Inside Jeffrey Dahmer’s childhood home where he committed first murder

EXCLUSIVE 'He's gutted': Harry Styles will NOT attend London premiere of new film My Policeman due to tour clash – after critics branded the singer 'awkward' in lead role

Google mocks Apple for being a follower of smartphone innovation

This Modified Mustang Crushes the Quarter Mile in Nine-Seconds

Gift Guides: The Best Gift for Every Zodiac Sign

One of the constant rules of thumb in video gaming is that no matter the quality of a Sonic game, the soundtrack is almost certainly going to be fantastic. Sonic Frontiers will hopefully be no different and it seems like Sega is throwing its full weight behind it’s audible delights, ...

This Dahmer-morabilia costs an arm and a leg. With interest in Jeffrey Dahmer skyrocketing thanks to the hit Netflix miniseries, an enterprising hawker is cashing in on the craze by selling the serial killer’s alleged urn, along with Dahmer memorabilia. “The Milwaukee Monster’s ash vase is the rarest true crime item I ...


View more: You can buy Jeffrey Dahmer’s urn for $250K

New York Post Composite Whenever we hear the name “Dyson,” it just sounds regal. But, we don’t love paying high prices all the time (or ever). Luckily, ahead of the Amazon Prime Early Access Sale — which is taking place on Tues., Oct. 11 and Wed., Oct. 12 — ...

Catan Is Coming to Consoles

A side order of 1-Ups with your McChicken Nuggets?

There's Never Been a Better Time to Play No Man's Sky on PS5, PS4

As was alluded to earlier in the week, No Man’s Sky’s latest update – named Waypoint – is less about adding mind-blowing new features and more about rebalancing the experience so it’s easier to enjoy for both newcomers and veterans. This comes in form of several tweaks, including an ...


View more: There's Never Been a Better Time to Play No Man's Sky on PS5, PS4

Earlier this week, CD Projekt Red revealed that it’s forming a new studio in Boston, Massachusetts in the US. It’s a big move for the Polish outfit, as this division of the company will be responsible for Project Orion — otherwise known as the full-blown sequel to Cyberpunk 2077. ...

Hideo Kojima Confirms Elle Fanning for Next Project, Seems to Be Death Stranding 2

The 40 best beauty gifts to give for Christmas 2022: Makeup, hair, more

No Ola, Uber and Rapido Autos in Karnataka as State Government Orders to Stop Services After Overcharging Complaints

No Man's Sky: Waypoint Update Is the Game's 'Biggest Generational Jump So Far'

NO MORE HEROES 3 Comes To PlayStation, Xbox, and PC

The Next Hideo Kojima Game Will Feature Elle Fanning

4 important tips to consider before buying an electric vehicle