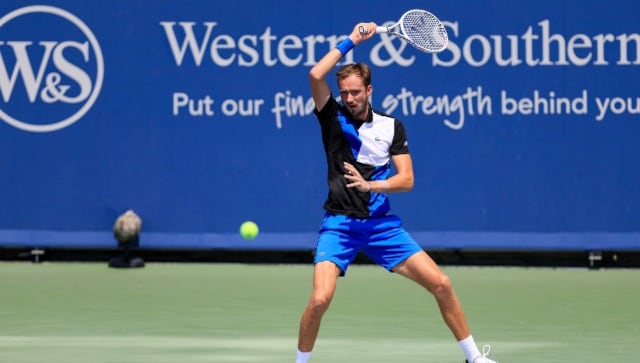 Daniil Medvedev secured late breaks in both sets as he matched his volatile Canadian opponent. AP

Top seed Medvedvev kept Denis Shapovalov winless against world number ones with a 7-5, 7-5 victory while Poland’s Swiatek lost 6-3, 6-4 to 2019 Cincinnati champion Keys, who needed five match points to finish off the shock triumph.

Shapovalov, who lost in an hour and three-quarters, has dropped all eight career matches he has played against the elite echelon.

“It was a fight today, definitely not easy,” said Medvedev, who clinched the top US Open seeding when Rafael Nadal lost here in the second round.

“The match was pretty tight, played at a great level. My goal was to stay in every point possible and try to put pressure on him if I had the chance.”

Medvedev secured late breaks in both sets as he matched his volatile Canadian opponent.

Medvedev and Fritz have never played.

“We trained together at the start of the season before the ATP Cup,” Medvedev said. “He won Indian Wells, he’s a Masters champion. I need to be at my best to try and beat him.”

Unseeded Keys was thrilled with her defeat of Swiatek, against whom she had lost two prior matches.

“I had a couple of games with a couple of match points,” Keys said. “She beat me pretty badly last time so I’m happy to get the win.”

Swiatek never found an ace and was broken five times as she fought back in vain after standing one game from defeat.

It was the second week in a row that the Pole, who put together a 37-match win streak this season, lost in a Masters third round. She suffered the same fate in Toronto seven days earlier.

Keys plays on Friday against Wimbledon winner Elena Rybakina, who advanced to the last eight 6-2, 6-4 over Alison Riske-Amritraj.

Top-ranked American Jessica Pegula ended the run of US Open champion Emma Raducanu 7-5, 6-4, sending the Briton onto the practice courts before the August 29 start of her Grand Slam title defense.

Raducanu will head to New York with a 15-18 record since her 2021 title triumph and will drop from the top-10 after failing to reach the quarter-finals.

The teenager put a backhand into the net to give her opponent a match point, with Pegula sending over a service winner to wrap up the victory in an hour and three-quarters on her opponent’s 21st unforced error.

“I didn’t feel amazing out there,” Pegula said after reaching her seventh career quarter-final at a Masters 1000. “I’ve never hit with Emma, there was a lot to get used to.

“I’m happy with how I competed and stayed in it. I’m glad I handled things really well. I’ve been playing very consistently, no dramas, get out there and do what you’ve got to do. I try to do that every single week.”

Isner passed Roger Federer, who was a younger 37 when he reached his most recent Cincinnati quarter-final in 2018.