Of all the places to meet a spouse, Demario and Tamela Davis first connected in a medieval literature class.

Demario Davis, an All-Pro linebacker who played five seasons with the Jets, now stars on the Saints. Tamela hosts cooking segments on New Orleans TV, and writes a blog called the “F Word” on faith, family and food, and hosts the podcast “Tea with Tamela.” Together, they run a foundation, Devoted Dreamers, and have five kids.

The medieval lit class was at Arkansas State. Tamela was an English literature major, and thus duty-bound to take the course. Demario majored in communications, and with the passage of time it’s unclear why he was there.

“We were walking out of class one day and just struck up a conversation,” Tamela told The Post. “We realized we had a lot of similarities. We’re both from Mississippi, we had similar interests. We had probably been in the same locations a number of times throughout our lives and just never connected.” 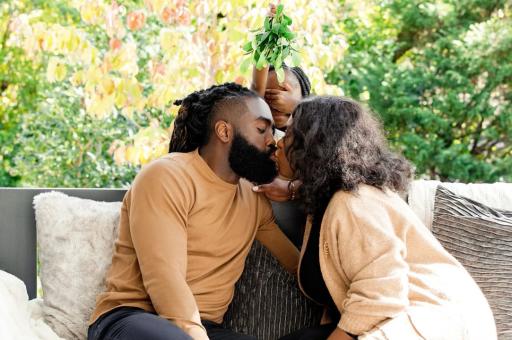 They started off as platonic friends. Demario describes the friendship as being “close, where we could talk about anything” — and they didn’t want to let emotions or physical connection get in the way of the friendship.

Some time passed, and Demario was in what he recalls as a “phase where I was looking for my wife.”

He talked to some of his spiritual mentors, who he was connected with through his faith, about how he was interested in Tamela. They gave the idea of a relationship between the two their blessing, and he asked her out on a date for a picnic by the lake at a park in Jonesboro.

“I set the stage up. I brought out the fruit, the delectable treats, the wine,” Demario said. “I wrote her a little poem. She was smiling bright.”

Tailgating treats with @tamelagilldavis this morning on @WWLTV and she’s determined from just putting ranch seasoning on my veggies 🤣🤣 pic.twitter.com/e2sQan4rqS

In the same breath he asked her to be his girlfriend, Demario was very forward: He was looking for a wife.

The bluntness clearly was not a dealbreaker, but it had to have been a nerve-wracking conversation for a pair of college students. 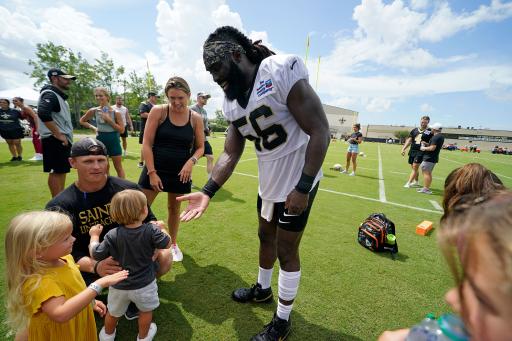 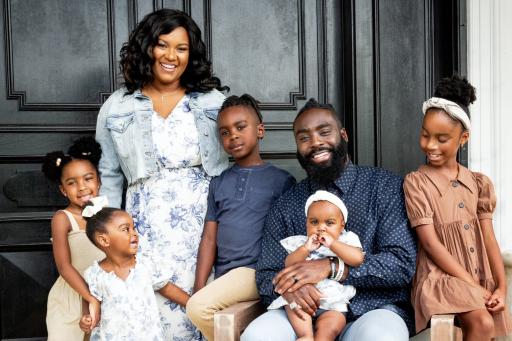 Demario and Tamela Davis with their five children

Demario spent his first four seasons in the NFL with the Jets, went to the Browns for a year, then returned to the Jets for one more season before signing with the Saints. A very solid player, he’s only missed one game in 10-plus seasons, and he’s started all but one game he appeared in since the beginning of his second season in the league. However, it wasn’t until he was 30 years old in 2019, in his eighth season in the league, that he became a first-team All-Pro. He followed that up with second-team All-Pro campaigns in 2020 and 2021.

The linebacker earnestly credits God for his career ascendance at what is a late age for a football player.

“I felt like Cleveland was going to be a fresh start, and then all of a sudden my body just started breaking down,” he said. “I was 27 years old and I didn’t understand it. I was fatigued all the time. I couldn’t control my weight. I didn’t have any major injuries, but I was sore all the time and had chronic aches and pains. It messed with me mentally, where I didn’t enjoy the grind of practicing. I told Tamela I thought I’d retire after my two-year contract. 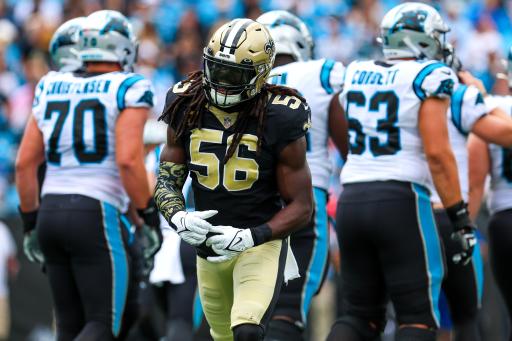 Demario Davis celebrates against the Panthers on Sept. 25, 2022.

“I remember praying on it. I didn’t feel like God was done with me with the game. I felt like there was more he wanted me to accomplish. I surrendered my career to God, said I was waving the white flag, and prayed that if I went All-Pro, or won a Super Bowl or go to the Hall of Fame — ‘whatever happens from this point on is all You, because I’m literally finished’ — and it’s almost like God said, ‘Thank you for getting out of the way.’ A lot of people look at it like, ‘Look at what this guy did with his career taking off at 30.’ I’m like, ‘Look at what God did after I surrendered my career to him.’”

The Davises launched the Devoted Dreamers Foundation in 2013. The goal is to empower youths to become leaders through spiritual, emotional, mental and physical awareness, and to help guide them towards avoiding some of life’s temptations. They host an event called “Dinner with the Davises” to encourage family dining, which they feel is becoming “obsolete in today’s society”; many of their best memories from growing up revolved around the table at meals.

They host a summer camp aimed at helping kids to keep up on their reading when they are out of school, and have a 7-on-7 football academy, which they are also evolving into an after-school educational program. The plan is to ultimately launch a whole school.

Tamela went on the New Orleans CBS affiliate WWL several times to promote the “Dinner with the Davises” event, and those spots eventually led to her doing cooking spots called “Tamela’s Tailgate Treats.” These are based around the meals she prepares at tailgates, or at home if they are hosting a gathering. A recent episode featured shrimp & chicken po’boys.

“It’s all comfort food, not a lot of healthy things, but I do feel like if people have their little cheat meal and let their guard down then it’s fun,” she explained. 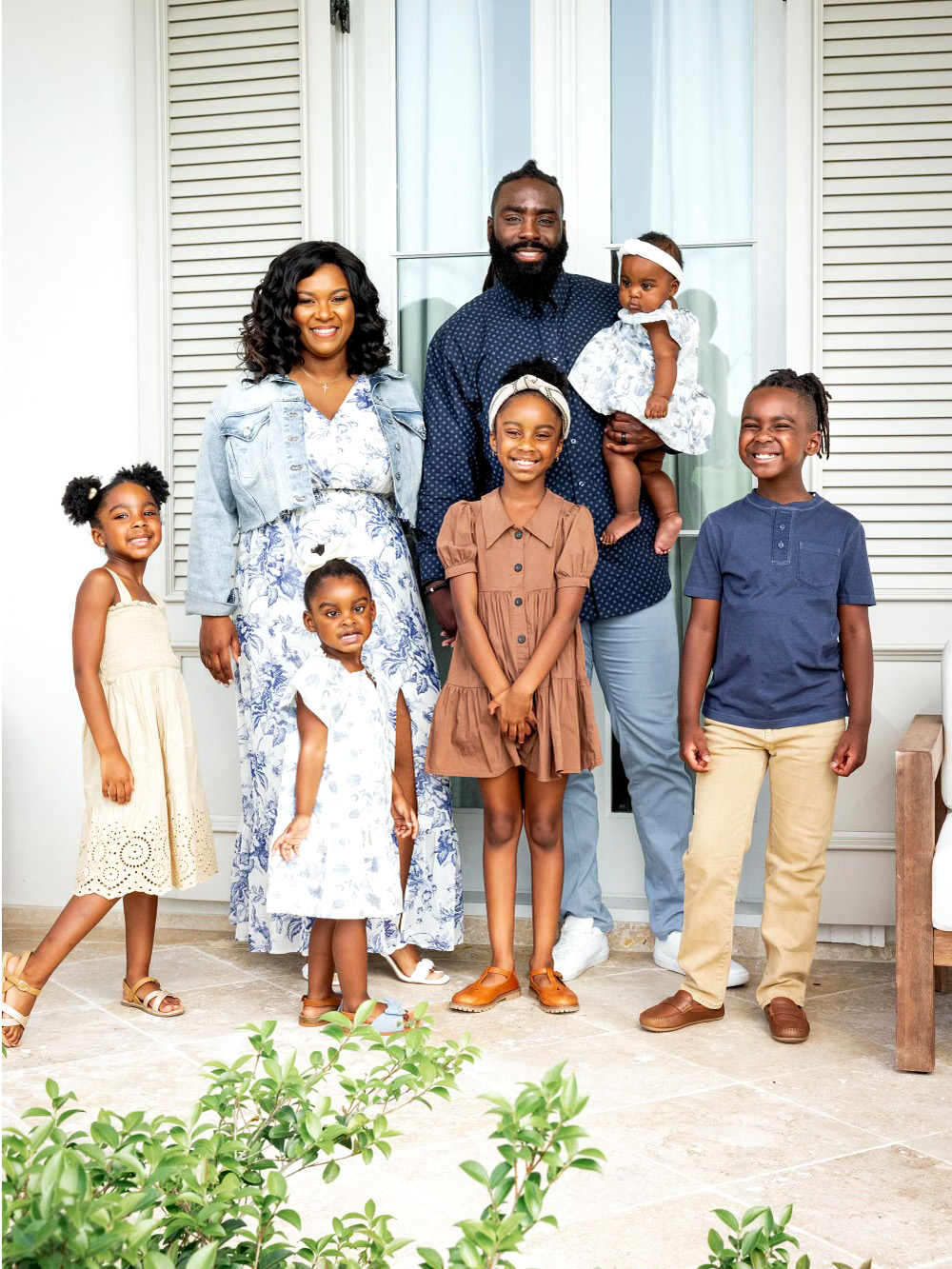 Demario and Tamela Davis with their five children

They were rocked by a cancer scare with Carly-Faith, who was diagnosed with Retinoblastoma, a rare form of eye cancer, when she was nine months old. They noticed a small “glow” in her left eye, but thought it was minor. However, once they left their in-season home in New Orleans for their offseason house in Nashville, the lighting was different and the glow was more perceptible.

They went to a doctor, and were connected with Vanderbilt, where they got in to see a specialist the same day. They went from the eye institute to the children’s hospital, where she was diagnosed with cancer. Carly-Faith was blind in her left eye, and had a tumor the size that would be seen in a three-year old. 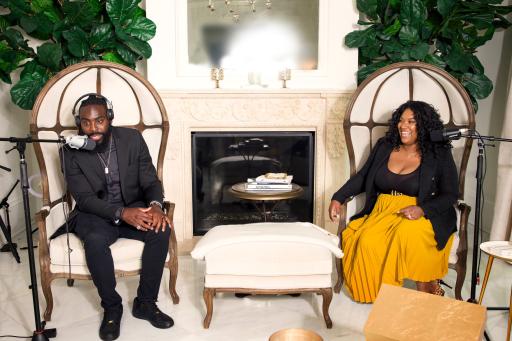 Demario and Tamela Davis on her podcast

Luckily, Tamela explained, the tumor had not spread to the other eye or to her daughter’s brain.

“It was one of those moments where we really had to make a rapid decision. Two days after she was diagnosed, they removed her left eye,” Tamela said. “It was definitely an emotional rollercoaster but we were really able to cling to our faith and see God’s purpose and hand in all of it. It was nothing that we wanted to or were prepared to go through, but it’s really given us an opportunity to see God’s hand in her life, share her story and advocate for other families that don’t have the resources or education to identify that this could be an issue for them.”