Disturbing video captures the moment a crew viciously pummeled a 62-year-old robbery victim and snatched his cellphone in the Bronx this week.

The victim was walking at East 150th and Exterior streets in Mott Haven around 5:20 p.m. Wednesday when a crew of five muggers approached him, cops said.

Footage shows the group knocking the man to the ground and repeatedly slugging and kicking him. 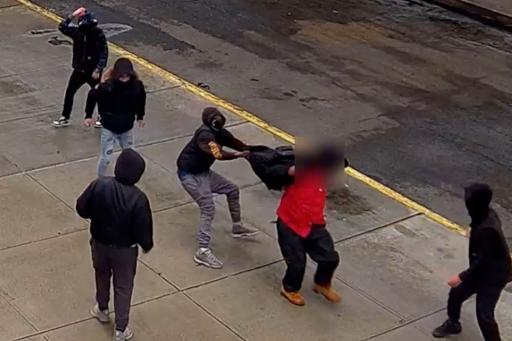 The suspects punched and kicked the victim before one spun him around by his jacket.

One of the suspects grabbed the victim by the bottom of his jacket and spun him around, the clip shows.

The victim dropped his phone during the attack — prompting one of the heartless muggers to grab it, according to cops and the video.

The group fled north on Exterior Street, and cops are still looking for them.

The victim was treated at the scene for his injuries.


View more: What Christmas Movie Does Kevin Bacon Watch In The Guardians Of The Galaxy Holiday Special?

“Squid Game” star Oh Yeong-su has been charged in South Korea in connection with an alleged 2017 incident of sexual misconduct. The 78-year-old Emmy nominee was charged Thursday, Variety reported. He was accused of touching a woman inappropriately, according to Yonhap news, a South Korean news agency. “I just held ...

Police are reviewing more than 260 photo and video tips the public as they search for clues in the shocking stabbing deaths of four University of Idaho students. The “digital submissions” include images and video clips, delivered to an FBI link, the Moscow Police Department said in a news release ...

At this time last year, Joel Soriano was getting benched, and his first season at St. John’s couldn’t have started worse. A year later, he has become an invaluable part of the program, and one of the most improved players in recent memory. That trend continued Saturday afternoon. Despite the ...