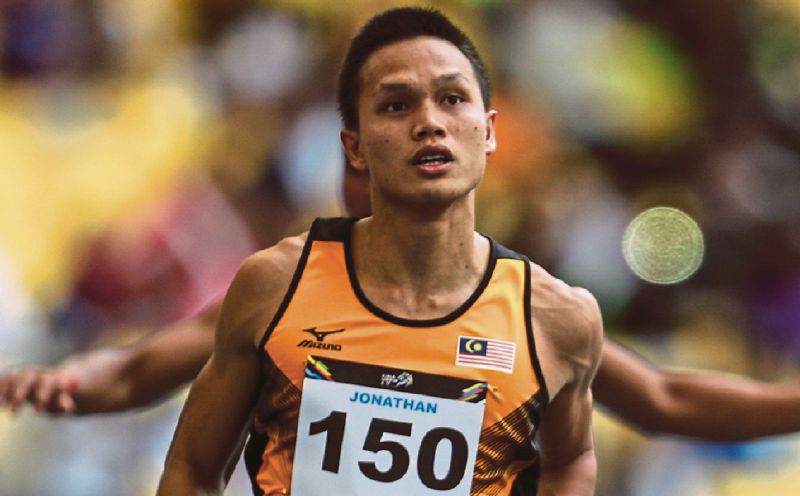 The sprinter has been without a coach since July after the one-year contract of his coach M. Balamurugan was not extended by the National Sports Council.

But that did little to affect his running as Jonathan unexpectedly won the 100m gold in the Central Asian Athletics Championships in Samarkand City, Uzbekistan, last week.

Though ranked among Malaysia’s top five sprinters, Jonathan is not known for his international success.

But in Samarkand, Jonathan stunned national teammate Khairul Hafiz Jantan, the 2017 KL Sea Games 100m champion with a creditable 10.55 seconds in the century sprint to capture the gold medal.

Though Jonathan, 26, has been without a coach, he trains on his own and following a programme given by Balamurugan.

Jonathan, who trained in Georgia, the United States, for six months in 2019, said: “I thank God, and my parents who prayed for me to win gold in the Central Asian competition.

“I won the gold without a coach. But I have been following a programme given to me by my coach since July.

“I must thank Balamurugan for all the help he has given me since I started training under him in 2015.

“It is never easy winning a gold without the guidance of a coach.”

Balamurugan said he is proud of Jonathan’s success in the Central Asian Athletics Championships.

“Although I have not coached him since July, he still follows the programme that I have given him.

“I want to see Jonathan win more medals for Malaysia, I wish him all the best in his training and competitions,” said Balamurugan, who guided Jonathan to a personal best of 10.28 to win the 100m silver in the South Korean Open in 2017.