Tributes have been paid to former Scotland rugby international Doddie Weir who has died at the age of 52 after battling motor neurone disease for five years.

Doddie – whose real name is George – announced he had been diagnosed with MND in June 2017 and helped raise millions through his My Name’5 Doddie foundation.

His charity work, as well as services to rugby and the Scottish Borders community earned him an OBE in 2019.

People took to Twitter to pay their respects to Doddie, who was capped 61 times for Scotland between 1990 and 2000, including First Minister Nicola Sturgeon who paid tribute to his bravery in the face of adversity.

She tweeted: “This is so terribly sad. Doddie was one of our nation’s sporting legends, but the brave way he responded to MND surpassed anything ever achieved on the rugby pitch. He refused to let it dim his spirit and did so much to help others. My condolences to his loved ones. #RIPDoddie “

Former Scotland captain Gavin Hastings described his ex-teammate as “a giant among men”, and sent his condolences to Doddie’s family.

He said: “Doddie. You have been a giant amongst big men. You have never complained, never felt sorry for yourself but have sought to make the world a more comfortable place for those who come after you. RIP Big Man and our love goes out to Kathy and the boys.”

Scottish football icon Sir Kenny Dalglish said Doddie left behind “an incredible legacy”. He said: “Very sad to hear the news about Doddie Weir. He led my example, inspiring so many others with MND and made great strides towards treatment and ultimately finding a cure for the disease. He leaves behind an incredible legacy. Our sympathy goes to his wife and 3 boys. RIP Doddie.”

Glasgow Caledonian University posted to say it was sad to hear their honorary degree holder had succummed to his illness.

They said: “We are deeply saddened to learn of the passing of honorary graduate Doddie Weir. The Former Scotland international rugby star was given an Honorary Degree of Doctor of Science for his contribution to the sporting community and charitable fundraising in 2018.”

Scottish Rugby released a statement on social media announcing the tragic news just weeks after the sporting legend made an emotional return to Murrayfield.

Doddie was was greeted by a standing ovation from the crowds as his family helped him out onto the pitch holding a rugby ball ahead of the match against New Zealand All Blacks on Sunday, November 13.

Leader of the Scottish Conservatives, Douglas Ross described Mr Weir as “a colossus”.

The Highlands and Island MSP said: “So sad to hear of Doddie Weir’s passing. Doddie was a colossus on the pitch and his brave fight for a cure to MND was an inspiration. My thoughts and prayers are with his friends and family.” 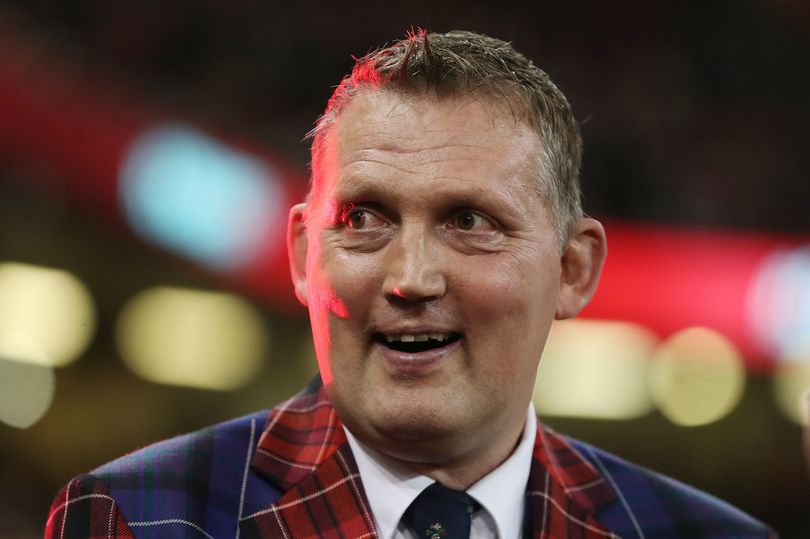 Doddie Weir has died at the age of 52

The MND Association paid tribute to the “inspirational” campaigner, saying: “We’re sorry to hear that Doddie Weir OBE has died. Since sharing his MND diagnosis in 2017, Doddie became an inspiration to many, raising awareness and campaigning tirelessly on behalf of those with MND. Our thoughts are with Doddie’s wife Kathy, his 3 sons, family and friends.”

Comedian Susie McCabe posted: “Gutted to hear about Doddie Weir. An absolute hero on and off the field.”

TV presenter Nicky Campbell said Doddie “lit up a room”. He said: “He lit up a stadium. He lit up a room. He lit up our studio. And – I’ll never forget our night in Cardiff on those rusty nails. (Whisky and Drambuie) although much of it I did forget – oh my Lord”

Journalist and TV presenter Dan Walker simply said: “I hope his family never forget how much he was loved #DoddieWeir “