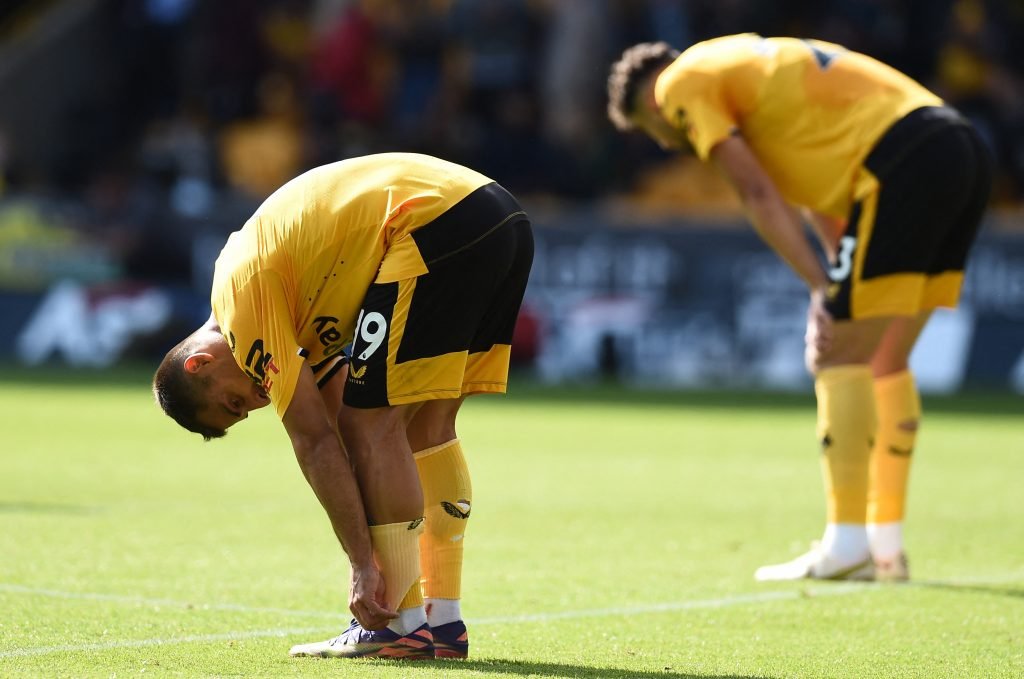 Referee Simon Hooper has been appointed to take charge of Wolverhampton Wanderers’ trip to Chelsea this weekend.

It has been a week of turmoil for Wolves, who sacked head coach Bruno Lage after the side’s 2-0 defeat at West Ham United last weekend, and remain manager-less for this weekend’s trip to Stamford Bridge.

The West Midlands side currently sit third from bottom in the Premier League, having won one of their first eight fixtures, but could theoretically jump to 12th this weekend if results go in their favour.

Adrian Holmes and Mark Scholes will run the line with Tom Bramall acting as fourth official, whilst David Coote and Harry Lennard will act as VAR and assistant VAR respectively.

What do the stats say?

Hooper has officiated five Premier League games so far this campaign, issuing 15 yellow cards and no dismissals according to Transfermarkt, suggesting he has been relatively lenient so far.

The old gold and black suffered a 1-0 Premier League defeat at Tottenham Hotspur earlier this season, in which was the last occasion the 40-year-old took charge of a match involving the Black Country side.

It didn’t go too well last time Hooper officiated a Wolves game at Molineux, with the referee pointing to the spot on no less than two occasions in a 3-0 home defeat by Brighton and Hove Albion last season.

In fact, according to Transfermarkt, the Midlands side haven’t won in their last five matches officiated by the Wiltshire-born referee, with their last victory dating back to a 2-1 victory at Bournemouth in November 2019.

We believe that Wolves fans will be disappointed by Hooper’s appointment with decisions and results going against the Black Country club in games that he has been in charge of, and supporters heading down to London will be hoping that their luck changes this weekend.

The Wanderers already have a thin squad as it is, with Pedro Neto, Raúl Jiménez, Saša Kalajdžic, Ruben Neves, and Nathan Collins all being unavailable for the trip to Stamford Bridge as it is.

However, Wolves will be hoping for a repeat of last season’s thrilling 2-2 draw at Chelsea, in which Lage’s side trailed by two goals with ten minutes of normal time remaining, before Francisco Trincão pulled a goal back before Conor Coady’s injury time equaliser.

Gary Neville responds to fans who mocked him over Spain comments

Carmen Electra, 50, shows off ample bust in a tiny rhinestone bra top as the ageless sex symbol joins stars at the People's Choice Awards in LA

Return of Elgin Marbles to Greece would be a ‘dangerous and slippery road’, warns Culture Secretary

Video: All aboard the Dart! King Charles shakes off 'egg attack' and beams as he rides energy-efficient cable car in Luton after taking charge in the control room

Jaguar SUVs worth at least £260,000 go up in flames on the side of the M1 after huge fire breaks out on transporter near Nottingham

'Gloves are off' as King has options if Harry and Meghan attack Royals, says expert

Video: Kim Kardashian and daughter North West, 9, make adorable TikTok together as youngster tells her mom: 'My heart fell in love with you'

Video: Man, I feel like a new woman! Shania Twain unveils VERY youthful look at 57 in wild sheer dress and millennial pink hair as she leads the stars on red carpet at People's Choice Awards 2022

Video: Lisa Rinna, 59, takes the plunge in a slinky black gown as she transforms signature shag into an edgy pixie cut for the People's Choice Awards in LA


View more: Video: Lisa Rinna, 59, takes the plunge in a slinky black gown as she transforms signature shag into an edgy pixie cut for the People's Choice Awards in LA

Despite the USA's last-16 exit, Yunus Musah impressed at the World Cup in QatarArsenal reportedly had already sent scouts to monitor the USA midfielderLiverpool and Chelsea have now reportedly joined the race for his signatureHis current deal at Valencia runs until 2026 and has a release clause of $105m Click here for all your latest international sports news from DailyMail.com Click here for the latest World Cup 2022 news, fixtures, live action and results


View more: Valencia 'has opened contract talks' with Yunus Musah to fend off Premier League interest as Liverpool and Chelsea 'contact the USA star's representatives' after he impressed at the World Cup


View more: Major change announced in every Kmart store across Australia - and it will change how thousands of people do their shopping

The San Francisco 49ers could receive a big boost as they look to make a SB runJimmy Garoppolo was initially feared to be out for the season but he may returnIn a best case scenario, the former Patriot could return in 'seven to eight weeks' Though there is a world wherein Garoppolo does not play at all this NFL seasonClick here for all your latest international sports news from DailyMail.com


View more: Jimmy Garoppolo 'could RETURN for the playoffs' as the 49ers quarterback does not need surgery on injured foot and could be back on the field for San Francisco in 'seven to eight weeks'

jwplayer-thumbnail-2912321.jpg A gas station pump in Rochester, New York, burst into flames after a teenage driver attempted to do a “burnout” stunt in a car park. Footage shows the driver crashing into the pump, which then explodes, causing a fire. Police say the incident took place in the early ...

People with certain respiratory conditions could be eligible for up to £156 a week through Personal Independence Payments from the Government. PIP is available to those with disabilities or long-term health conditions. The payment is worth between £24.25 and £156.90 per week and is paid every four weeks, totalling up ...

Renee Bargh was simply glowing as she arrived to the 2022 AACTA Awards in Sydney on Wednesday. The fill-in Today host, 36, showed off her growing baby bump in a tight orange dress as she joined Christian Wilkins on the red carpet. Renee completed her stunning frock, which featured a plunging neckline and ...


View more: Today host Renee Bargh flaunts her growing baby bump in a tight orange dress while Christian Wilkins shows off his incredibly toned figure in a corset as they lead the arrivals at the 2022 AACTA Awards in Sydney

Ian Blackford has been ousted as the SNP Westminster leader, with his successor to be confirmed today. Why the SNP could come to regret early exit of Ian Blackford – Alexander Brown Having shrugged off an apparent leadership challenge from Stephen Flynn mere weeks ago, Mr Blackford has stood down ...


View more: Why the SNP could come to regret early exit of Ian Blackford - Alexander Brown

Antibiotics could be given to pupils en masse as health chiefs look to control outbreaks of Strep A in primary schools after girl, 5, became the ninth child to die from the infection this winter

Australian billionaire snaps up CWP Renewables for over $2.7 billion

Sussex town has the second-highest proportion of smokers in UK, study finds

PICTURED: Twelve people wanted by Dorset Police - have you seen them?

Faye Winter dazzles in a silver gown as she and Teddy Soares look as loved-up as ever at the afterparty for the Avatar: The Way Of Water world premiere

My Daily Horoscope: What does December 7th 2022 bring for MY star sign? Oscar Cainer tells all

Stormont Assembly set to be recalled amid powersharing impasse

In the supermarket and on the farm, hungrier times lie ahead

EXCLUSIVE: Ex-Channel Nine star Cameron Williams breaks cover in an oversized polo shirt as he suddenly puts the bush retreat where he allegedly assaulted his wife on the market

Strep A: Pharmacies warn of penicillin shortage as parents urged not to self-diagnose their children

Let the battle commence! Aaron Judge 'has $360million contract offer' from the San Francisco Giants... after the Yankees 'put $300m on the table' to keep their star outfielder in The Bronx

Video: Chrishell Stause is a showstopper in a sparkling sheer nude dress at the 2022 People's Choice Awards in LA

Temperatures to plunge to -10C TODAY: Health chiefs advise people warm their homes to at least 18C to cope with ice cold snap from the 'Troll of Trondheim' after Scotland and the North of England were coated in snow

My husband’s DIY disasters are making us a laughing stock

Three in ten homeowners are yet to go up to their loft, study finds

Video: Royal aide who claims they were bullied by the Duchess of Sussex urges Buckingham Palace to release staff from non-disclosure arrangements and 'reject Harry and Meghan's lies' ahead of Netflix series launch

Grey's Anatomy star Ellen Pompeo glows as she poses up SOLO at People's Choice Awards... weeks after longtime husband is seen out to dinner with mystery blonde

Video: Morocco fans in cities across the world clash with police as celebrations over historic World Cup penalty shoot-out victory against Spain in Qatar turn ugly

EXCLUSIVE: Desperate final hours of girl, 18, who died from meningococcal after attending a music festival are revealed after her life support was tragically turned off

'She's dreaming': TikTok star reveals her 12-year-old daughter made a PowerPoint PRESENTATION to unveil her detailed Christmas list featuring '$3,000 worth of stuff'

Cashpoint crooks who smashed into Cheshire buildings with diggers jailed

'The lights were on but nobody was home': Britney Spears' former make-up artist speaks about the singer's 2008 breakdown and how fame changed her friend

Kim Kardashian and daughter North West, 9, make adorable TikTok together as youngster tells her mom: 'My heart fell in love with you'

She's just like us! Hollywood star Rebel Wilson flashes her bra in a sheer top as she picks up some Dove deodorant at a local IGA supermarket in Sydney

EXCLUSIVE: Rollercoaster crash twist: Why operators could still be charged over Shylah Rodden tragedy – regardless of toxicology findings

Missing me yet, Harry? Olivia Wilde ditches her bra and slips into see-through dress after Styles heartbreak... as she hits People's Choice Awards red carpet