A resignation letter raising concerns about the relationship between minister Eleni Petinos and the developer that hired John Barilaro was sent to the NSW Premier's chief of staff only hours before Ms Petinos was sacked.

The Premier said he wasn't aware of the letter

Premier Dominic Perrottet has maintained Ms Petinos was dumped from her portfolio and the cabinet over allegations of bullying.

But the July 7 resignation letter of David Chandler, the state's building commissioner, detailed concerns about Ms Petinos's relationship with the Coronation Property Group, of which former deputy premier Mr Barilaro was an executive director.

The latest documents filed to the NSW parliament show this resignation letter was forwarded to the Premier's chief of staff, the most senior person in his office, on the afternoon of July 31.

Allegations of bullying by Ms Petinos had been reported for some days before that but the Premier said she denied any improper conduct and the allegations had been dealt with appropriately.

But late on July 31 Mr Perrottet announced Ms Petinos had been stood down as the state's fair trading minister. 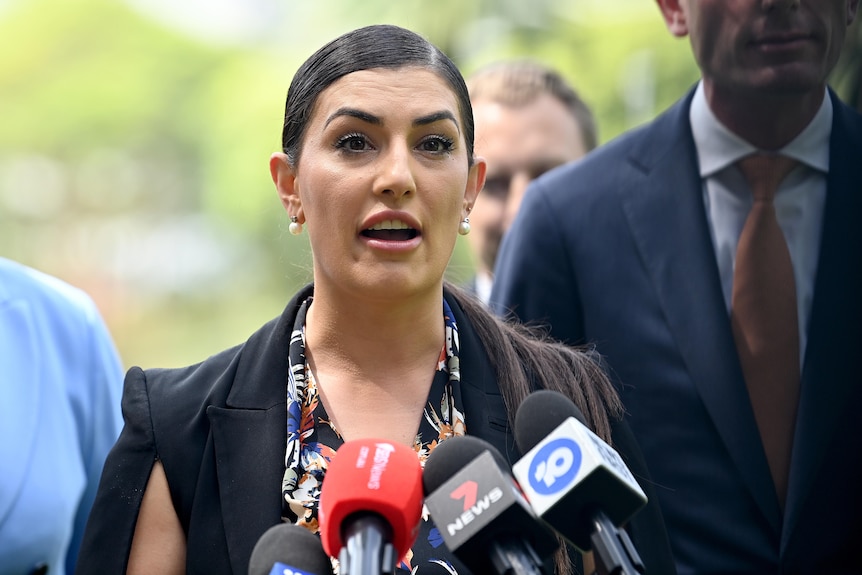 Eleni Petinos was sacked from the NSW ministry after allegations of bullying.(AAP: Bianca De Marchi)

“Based on the information I've received, I don't believe the environment in that office was appropriate,” Mr Perrottet said the following day.

“And members of the public service did not feel comfortable.”

On that same day, he said he wasn't aware of Mr Chandler's letter but any issues raised in the letter had “absolutely nothing to do with my decision”.

Over a week later, in parliament, Mr Perrottet again said he had not read Mr Chandler's resignation letter.

“I can say to the member that that was not a factor in the consideration of that decision (to sack Ms Petinos), clearly, because I have not read the letter,” he said. On August 10 Dominic Perrottet announced the resignation letter had been referrred to ICAC.(AAP: Bianca De Marchi)

Earlier today, Mr Perrottet said the issues in the letter were “peripheral”.

“I had a discussion in relation with the department secretary … the issue in relation to matters arising from that letter were peripheral to the discussion,” he said.

“It was clear to me and based on the advice that I received from the department secretary that she'd made inquiries and was satisfied in relation to that and appropriate action had been taken.

“I cannot make this clearer, and just like I have asked numerous times in relation to this matter, that you respect the decision that I made based on information I received in respect of the workplace of the then minister.”

Labor's spokesperson for better regulation Courtney Houssos said it was hard to believe it took 10 days for Mr Perrottet to be briefed on the letter.

“The Premier continued to deny knowledge of the content of the letter all the way up until [the] 11th of August, despite the revelation that his most senior adviser had a copy of the letter on the day the Premier sacked Eleni Petinos,” she said.

“What we learnt today is that the Premier's own chief of staff received it on the same day that Ms Petinos was sacked and the day before it was referred to ICAC.”

The ABC contacted the Premier and Ms Petinos for comment.

John Barilaro worked for Coronation Property before being appointed as the US trade commissioner.(AAP: Bianca De Marchi)

Earlier this month two meetings Ms Petinos had with representatives from Coronation Property came into the spotlight.

The first was on June 2 and the other on June 21 was also attended by Mr Barilaro.

Ms Petinos has previously said lifting of the order had nothing to do with her as the building commissioner is responsible for the issuing and revocation of such orders.

“A formal meeting occurred with representatives from Coronation Property Co and MN Builders on 2 June 2022. Mr Barilaro was not in attendance. We met in relation to building regulatory matters and I did not take any action in relation to the matters,” she said.

“The disclosure of 21 June 2022 was provided out of an abundance of caution and was social in nature. Mr Barilaro was in attendance.”

Mini is developing an electric crossover to slot in below the Countryman. It was previewed in July by the Aceman concept and is expected to carry that name into production. We now have the first spy shots of a prototype. Acura’s ZDX nameplate is about to make a return, ...

Dominique Aegerter will have the same factory R1 as Toprak Razgatlioglu at the start of the season Dominique Aegerter has already announced the new leap in his career: the Swiss will race in the Superbike World Championship in 2023 and will have Remy Gardner as a teammate at GYTR ...


View more: Dominique Aegerter will have the same factory R1 as Toprak Razgatlioglu at the start of the season

A Tory minister has been suspended by the party amid allegations about his behaviour at its annual conference. Conor Burns, 50, has vowed to clear his name after losing the Conservative whip, according to the Sun. The former Northern Ireland minister, who is now a trade minister, is a longstanding ally of ...


View more: Minister and Boris Johnson ally Conor Burns has Tory whip suspended amid ‘complaints about his behaviour’ during the Conservative Party conference in Birmingham

Fountains in Tehran run blood-red in tribute to Mahsa Amini

Get best-of-web pricing on this minimalist corner floor lamp

iPad Mini Deal at Amazon Knocks $99 Off the Price, Grab One for $400 Today

Who are the shortest-serving Prime Ministers in UK history? Top 15 leaders to leave office the quickest

Cute, compact, and portable! Take your favorite beverage on the go with this rechargeable personal blender that includes a free mini ice cube tray - and right now it's 26% off