The UK boss at one of the biggest global motor brands says affordable small electric cars are not commercially viable due to the high cost of batteries.

Kia’s UK chief executive, Paul Philpott, said it is for this reason that his company currently has no plans to bring a mass-market electric vehicle to showrooms, despite the ban on new petrol and diesel cars looming in 2030.

His comments follow a report from the Advanced Propulsion Centre earlier this month that confirmed it has dramatically cut UK electric car production forecasts up to 2025 because battery vehicles remain too expensive for many motorists. 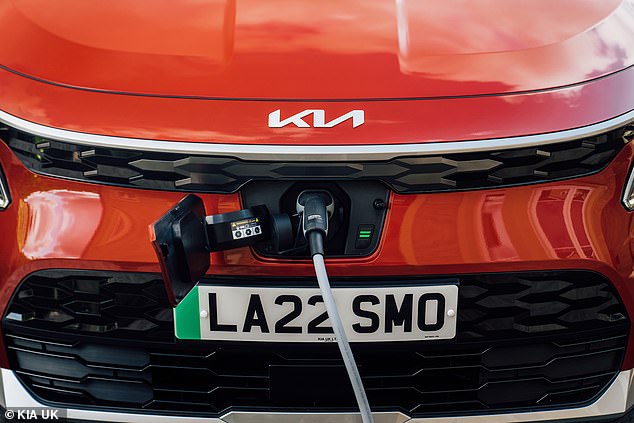 Mr Philpott’s statement came during a launch event last week hosted at its British headquarters in Walton-on-Thames, Surrey, where the UK boss reflected on the brand’s progression over the last 15 years – and where it’s going next.

Industry figures show that Kia celebrated record sales of 100,191 units in 2022 – four times as many vehicles it sold to UK customers in 2007, making it Britain’s fastest-growing mainstream car brand.

And sales of electric vehicles were a major contributor to its success.

Of all the vehicles the brand shifted in 2022, 16.3 per cent were battery electric cars.

And Mr Philpott said 20 per cent of this year’s advance order bank is already for fully-electric cars – and there’s an expectation for this figure to rise throughout 2023 and beyond. 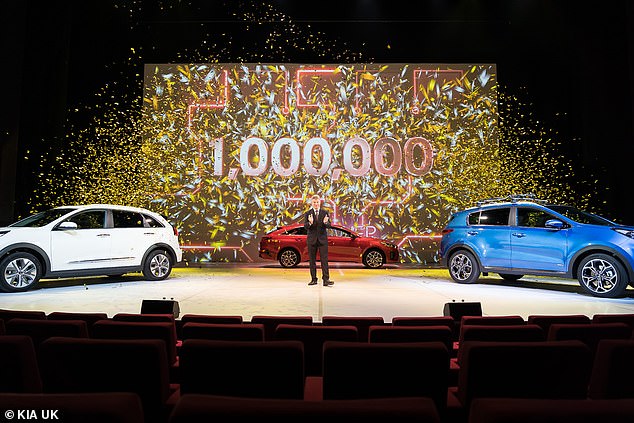 Kia is the fastest-growing car brand in terms of UK sales, with the Korean maker shifting more motors in 2022 than Citroen, Fiat and Peugeot combined

Yet despite the increase in EV demand, he claims there won’t be a small, affordable electric model coming to the brand’s showrooms anytime soon.

He said: ‘The electrification of the small car is really difficult, economically speaking,’ according to a report in The Times.

Most car makers are predominantly offering premium electric models in their fleets, which provide stronger profit margins on the cost of installing electrified systems, with the battery pack by far the costliest component of all. 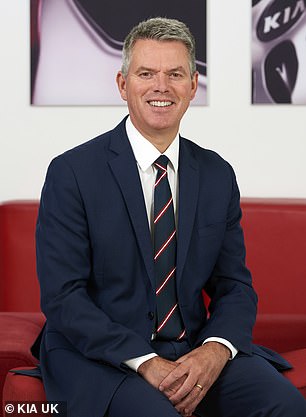 That’s because the smaller the car, the larger the proportion the battery in its production cost, which is why there are so few sub-£30,000 small compact EVs on the market.

Mr Philpott’s prediction threatens to undermine the government’s ban on selling petrol and diesel vehicles by 2030.

However, ministers are pinning their hopes on the introduction of a Zero Emission Vehicle (ZEV) mandate in 2024 to encourage car makers to bring cheaper models to consumers in the imminent future in order to meet increasingly-strict sales requirements.

From next year, the ZEV mandate is expected to mandate that 22 per cent of all auto brands’ UK sales to be electric.

This market share requirement will increase with each year, with a third of all sales needing to be battery powered in 2026, under the Department for Transport’s technical report released back in April last year.

While the ZEV mandate is expected to be enforced from next year, the government is still yet to confirm the ins-and-outs of the scheme, including what punishment manufacturers will receive if they fail to adhere to these binding targets.

Electric future: The Zero Emission Vehicle mandate will make it a requirement for car makers to increase their EV sales each year to 2035

Earlier this month, the Advanced Propulsion Centre, which provides taxpayer funding to makers of zero-emissions vehicles, said in a report that the ‘uncertain economy’ will push drivers towards cheaper – petrol and diesel-powered – cars for a longer period than it had previously expected.

As a result, makers of electric cars are slowing down UK production as the vehicles are too expensive for many motorists.

The forecast means only a quarter of car output will be electric within the next two years, lower than prior forecasts of more than a third. 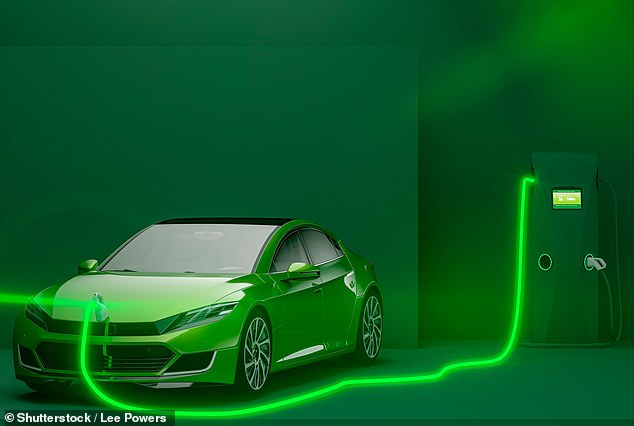 It added that the phenomenon was not unique to the UK, with electric vehicle production across Europe predicted to be 12 million, a million less than previous estimates.

The slowdown comes as prospective buyers see their budgets hammered by the cost of living squeeze and inflation, which is already showing signs of impacting appetite for expensive EVs.

Tightening purse strings already appears to be a concern at Tesla, with the brand slashing the price of its Model Y and Model 3 by as much as £9,000 and £8,000 respectively this month – much to the anger of Tesla customers who paid far more for cars that were delivered in December.

While Mr Philpott said there are no imminent plans for Kia to introduce an electric car for those on smaller budgets, he did concede that the imminent arrival of cheaper-priced Chinese brands into the British market could force its hand. 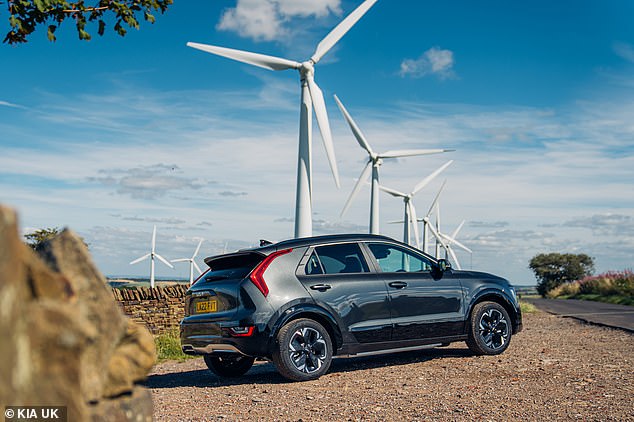 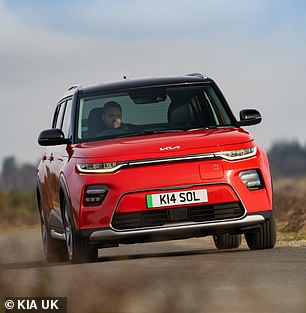 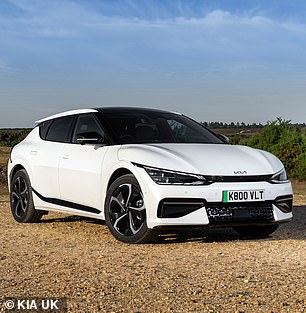 There are just THREE electric cars for less than £30k

Currently, Kia has three fully-electric cars in its model range, including the popular Niro EV, which starts from £36,795.

The cheapest model is the Soul EV, which starts from £32,845, and the most affordable sleek EV6 premium hatchback costs a whopping £45,245.

Its next model won’t be inexpensive either; the Kia EV9, an electric seven-seat sports utility vehicle, is set to start in the region of £60,000 when it is officially unveiled later in the year.

While Kia says it has no plans to bring to market cheaper models, experts have predicted that the price of new electric cars will shrink dramatically in coming years. 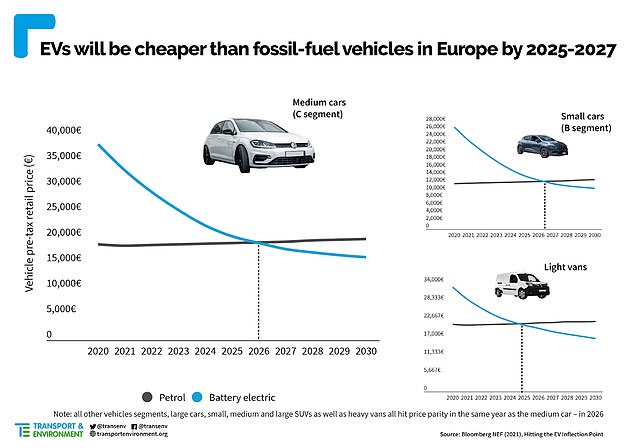 A 2021 report predicted that electric vehicles will have price parity with new petrol models from 2026 onwards, though this is looking increasingly unlikely with EV prices going up

A report in 2021 produced by BloombergNEF produced on behalf of campaign group Transport & Environment said that by 2027 electric cars will be cheaper to produce than models with petrol and diesel engines.

It claims that falling prices will be driven by cheaper batteries, with their price in 2030 estimated to be 58 per cent lower than they were in 2020.

It says manufacturing costs will be lower for electric family cars and SUVs by 2026, with battery superminis and city cars being less expensive to make by a year later.

The study claims that lower costs will drive a surge in EV demand, predicting that more affordable prices will result in 100 per cent of passenger car sales across Europe being battery electric by 2035.

However, the market points at prices going in the opposite direction.

As it stands, there are just three pure electric cars in showrooms today that cost less than £30,000, down from seven under that price point in September 2022.

The cheapest is the new MG4 EV – a family-size hatchback launched late last year that starts from £25,995. 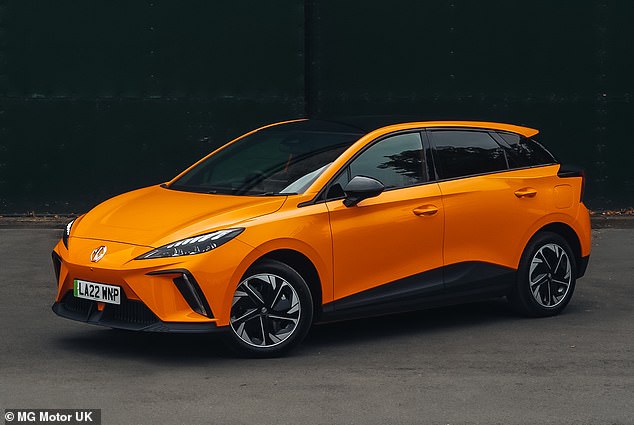 This is the cheapest electric car on sale in Britain , the MG4 EV. It costs from £25,995, which is £3,000 less than the next least-expensive battery model in showrooms 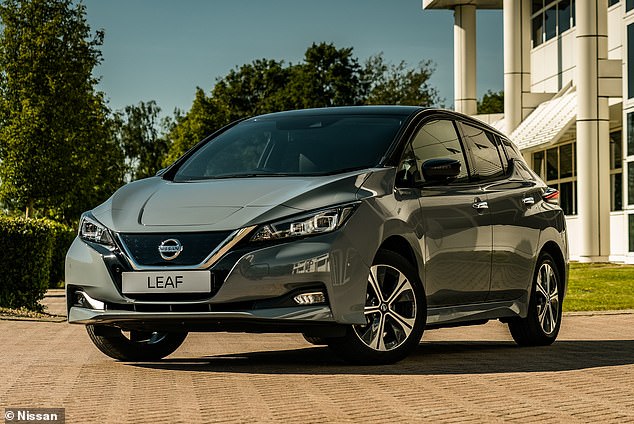 Nissan’s Leaf, which is built in the UK at the Sunderland plant, is second least-expensive EV on sale in Britain, with prices starting from £28,995 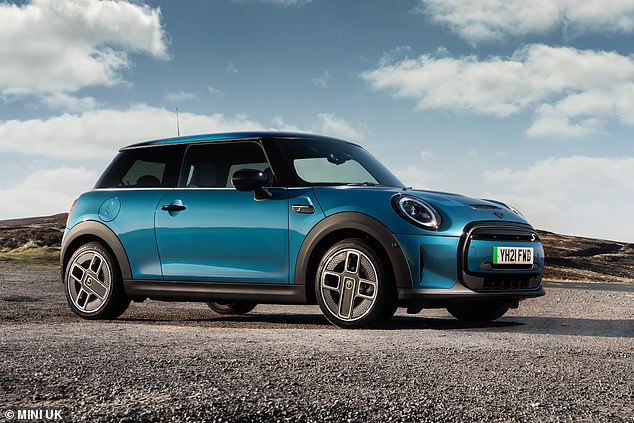 The Mini Electric hatch is the third and final electric car for under £30k in the UK. It costs from £29,000, though a new-generation version is due to replace it soon

The remaining two models under the £30k price point is the Sunderland-produced Nissan Leaf at £28,995 and the soon-to-be discontinued Mini Electric at £29,000 – which is currently made in Oxford but assembly will soon move to China.

In comparison, the cheapest petrol-powered car in Britain today is the Dacia Sandero, which starts from £12,995 – almost half the price of an MG4 EV.

Experts claim the dwindling number of sub-£30k electric cars on sale is a result of ‘a perfect storm of inflation together with manufacturers streamlining their ranges’.

This has pushed the price of even the smallest electric cars much higher in recent months.

This is partly due to the Italian company deleting the entry-level model with a smaller battery from its range, but the car has also had an inflationary increase of £2,650 in addition to the government terminating the plug-in car grant last June.

Another example of EVs rocketing in price is the Skoda Enyaq; the cheapest version of the Czech brand’s electric SUV is £38,970, up from £30,450 two years ago. 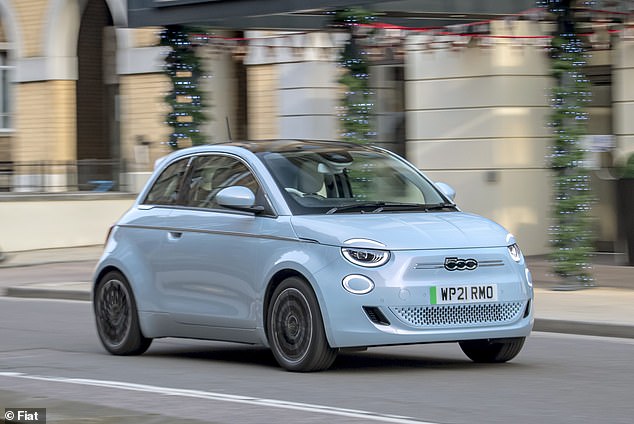 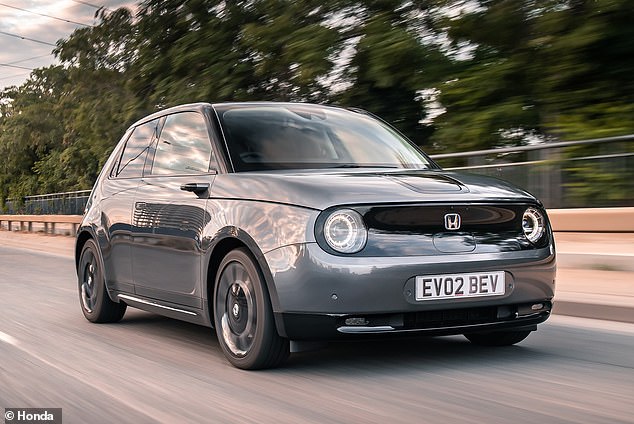 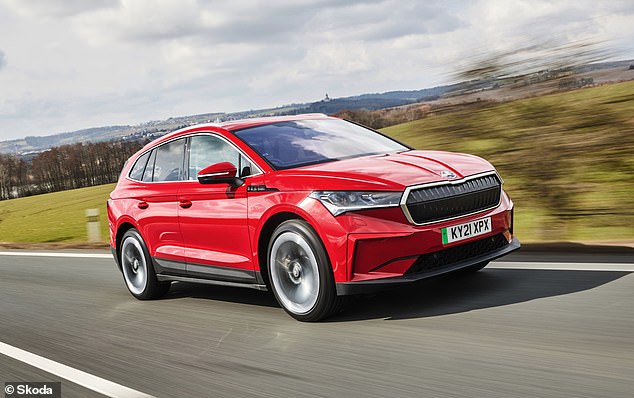 Ford is a classic American automaker that has a lot of good cars in its lineups, but like any other automaker, Ford is not perfect. There are a lot of issues affecting various Ford models, and the Escape has its own share of problems too. Here’s a look at the ...


View more: The Biggest Flaw of the Ford Escape According to Actual Owners

Will the Ranger Raptor Be Enough to Save Ford’s Mid-Size Truck?

Kia EV9 concept expected be on display at 2023 Auto Expo

Been there: Kia ‘respectful’ of Chinese cars

AA DRIVEN COTY 2022: Kia Sorento is the best Large SUV of the year

AA DRIVEN COTY 2022: Kia Sportage is the best Medium SUV of the year

Did a 4500 km road trip in my Kia Sonet petrol DCT: Key observations