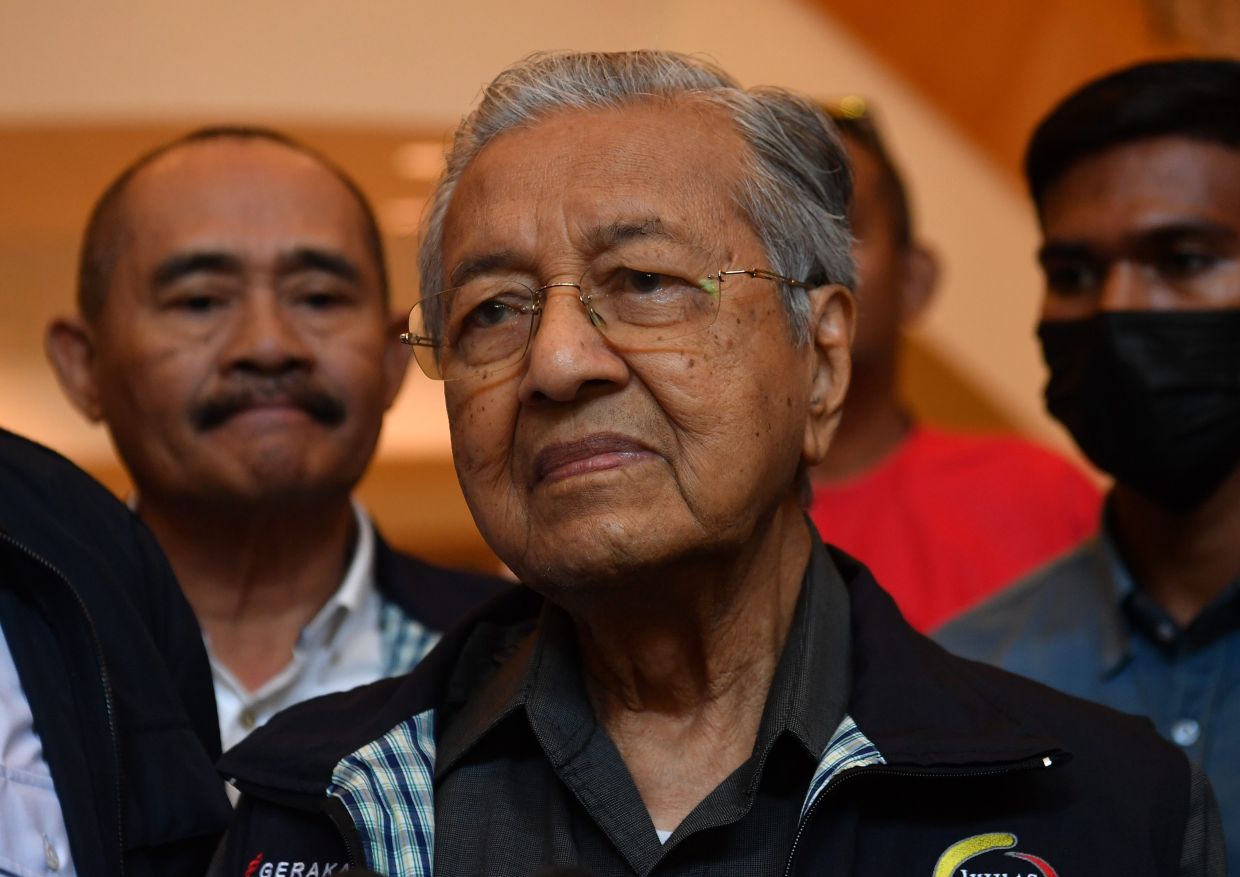 CYBERJAYA: Gerakan Tanah Air (GTA) will determine its support for the 15th General Election (GE15) after the Prime Minister has proposed the dates to the Yang di-Pertuan Agong, says Tun Dr Mahathir Mohamad.

The GTA chairman and former prime minister said the decision to support or oppose will be made after the dates were announced, though the coalition is of the opinion that GE15 should be held at a later date.

“We (GTA) feel that the election should be held when we are not facing big floods or strong winds, so that our voters are safe.

“I think it is best for it to be next year after the rainy season,” he said to the media after the “Suara Tanah Air” programme organised by the GTA youth wing.

Dr Mahathir, in his speech, claimed that the current government will choose an election date that would be to its own benefit.

“They (the government) will choose an election date that will benefit them.

“That’s why they planned for an election date, even though there will be floods either at the end of this month or in November,” he said.

On Friday (Sept 30), Umno secretary-general Datuk Seri Ahmad Maslan said Prime Minister Datuk Seri Ismail Sabri Yaakob, who is also Umno vice-president, has been urged to seek an audience with the Yang di-Pertuan Agong to present a few potential dates to dissolve Parliament by the end of the year.

Ahmad said the decision by the Umno supreme council was consistent with the party’s stand from the beginning to return the mandate to Malaysians after the fall of the Pakatan Harapan government in February 2020.

East Malaysians must reclaim their voices and help keep the peace

Skirting conflict in govt lands PM in conflict of interests

Saifuddin: No pre-planned cooperation between PH and BN before GE15

A new chapter for M’sia-UAE ties

Paving the way for smart city

Johari in race for Speaker’s job

Selangor is investing about RM700mil to deepen and widen Sungai Klang, which covers a 56km stretch of the river. – Photos: S.S.KANESAN/The Star Selangor is rolling out a 10-year plan to study and implement an interconnected system linking lakes with river basins as part of a state-wide water resources ...

Report: Police collect RM60m in traffic summonses this year; IGP praises cops for going above and beyond

Malay Mail KUALA LUMPUR, Dec 7 — Close to RM60 million in traffic summonses have been paid for the first 10 months of this year, according to Inspector-General of Police Tan Sri Acryl Sani Abdullah Sani. He said the majority was paid online while some RM10.37 million were collected ...


View more: Report: Police collect RM60m in traffic summonses this year; IGP praises cops for going above and beyond

The change of government and the sense of optimism it has brought in some voters have, among others, seen the resurfacing of several scams offering financial aid to the public. At the end of November, fact-checking initiative JomCheck received a copy of a text message promising RM1,000 of financial aid ...

Repair works being undertaken by DID in Taman Setia Warisan last month following floods that occurred in the Kampung Melayu Subang vicinity. — Courtesy photo The flood mitigation project involving Sungai Pelempas near Kampung Melayu Subang is midway through, with phase one completed. The appointment of consultant and awarding ...

Voting centres open their doors for Tioman state election ROMPIN: The doors at 17 polling centres in the Tioman state seat election opened at 8am today to allow 28,108 individuals to cast their ballots. An Election Commision spokesman said 506 election workers will be deployed to assist at polling ...

No BN-PN alliance because Bersatu cannot be trusted, says Puad

BN makeover a must if it wants support of progressives, says academic

Emotional moment for Pejuang candidate as he votes in old school

MYAirline takes off to Kota Bharu, Penang and Sibu

Manifesto pledge comes back to haunt Anwar in 2022

Talk to us, not to hardline Hamzah, activists tell Saifuddin

Attracting Gen Zs + millennials in the war for talent

Video probed over attempt to tarnish image of police

Man Who Shot Lady Gaga's Dog Walker During Dognapping Sentenced to 21 Years: 'I Do Forgive You'

IndyCar's next-gen engines will now be 2.2-litre motors instead of 2.4

Selangor Speaker: 'Don't be late when even journalists can come early!'

EXPLAINER: Why is Indonesia's new criminal code so controversial?