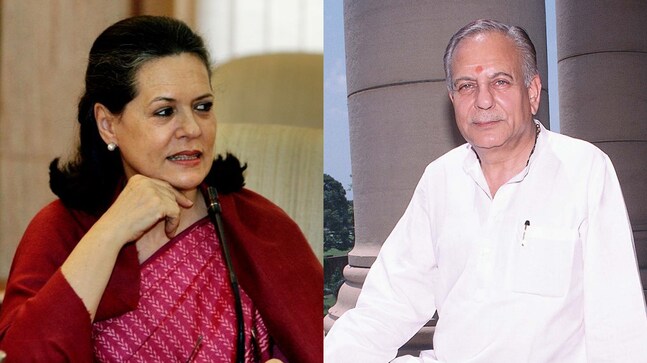 In 1998, Sonia Gandhi became the Congress president for the first time. It was a bloodless coup that saw Sitaram Kesri’s unceremonious removal from the post and his belongings being sent away from the party office in a jeep, with a message for him never to return. But just when many thought a Gandhi was well and truly back in charge of the party, trouble began.

The next year, Sharad Pawar, PA Sangma and Tariq Anwar mounted an open rebellion. They felt the Italian-born widow of former prime minister Rajiv Gandhi was not fit enough to run the country due to her foreign origins and limited political experience. The trio was expelled from the party.

Now, from the post-Indira Gandhi era, only two stalwarts could challenge her. One was former Rajesh Pilot, who had been a minister under prime ministers Rajiv Gandhi and PV Narsimha Rao. Despite losing the Congress presidential election to Kesri in 1996, Pilot remained a front-line Congress leader. The other challenger, though not as potent, was Jitendra Prasada.

With Sonia completing the remainder of Kesri’s term in 2000, the Congress had to elect its new president. Given Kesri’s removal and the expulsion of the three rebels, Sonia’s inner circle expected her to be elected unopposed. After all, in 1998, the Congress Working Committee (CWC), the party’s most powerful decision-making body, had made her the president.

Read | Sitaram Kesri, the Congress president who had his dhoti pulled

The post was deemed to be hers. Many thought she had earned it. The refrain was: her mother-in-law, then prime minister Indira Gandhi, was assassinated in 1984; her husband and then Congress chief, Rajiv Gandhi, was assassinated in 1991; she still joined politics, after her initial refusal, not for power but to save the party. These were the initial days of the suggestion that only a Gandhi could do it.

But resentment had been brewing. After Pawar’s ouster, Pilot emerged as the centre of dissent against dynastic politics. He had voiced his opposition to the Congress’ alliance with J Jayalalithaa and Lalu Yadav and many other issues. Unlike his contemporaries, Madhavrao Scindia and Digvijaya Singh, only Pilot seemed to have what it took to challenge Sonia. He openly criticised her leadership, stayed away from 10, Janpath and never hid his desire to become the prime minister one day.

Both Pilot and Prasada started a campaign by holding rallies to take back the party’s control from Sonia, whose advisors and associates hit back by citing the contributions and sacrifices of the Nehru-Gandhi family. But a significant plot point came when Pilot died in a road crash in June 2000. Pilot had not formally announced his candidature but Prasada chose to battle on, as the lone candidate, in more than one sense, against Sonia in the Congress presidential poll.

Sonia had a firm grip over the Congress, but her efforts were not yielding electoral successes for the party. She campaigned in the 1999 Lok Sabha elections in which the Congress lost and Atal Bihari Vajpayee again formed a BJP-led government at the Centre. In 1998, too, Sonia had campaigned but then her inner circle blamed then party chief Kesri for the party’s loss.

In 1999, she was herself leading the party. And it’s not just the national polls. The Congress also lost states such as Bihar and Odisha (then Orissa) under her leadership.

On the other hand, Prasada was the scion of a Brahmin landlord family in Uttar Pradesh’s Shahjahanpur, with family links to the Tagores in West Bengal and the Kapurthala State in Punjab. In 1985, Rajiv Gandhi made him All India Congress Committee (AICC) general secretary and later his political secretary in the party.

When Rao became the prime minister in 1991, and then the party president, he also retained Prasada as his political secretary. Prasada had also been the party vice president and, while fighting the poll against Sonia, he was a CWC member, with a good support base in UP (where he had once headed the party) and some other states.

But all these attributes were not enough to defeat Sonia. Then why was Prasada risking his reputation? After all, he had seen the fate of Pawar, Sangma and Anwar.

Prasada did not get along with Sonia and her inner circle, including Arjun Singh, Vincent George, Pranab Mukherjee, Oscar Fernandes, Ambika Soni and others. There were many reasons for that. One of them was that the coterie wanted to remove Prasada’s boss, Rao, from the post of Congress president for Sonia to take over, and he refused to be part of such a plot in 1992, according to several accounts.

Prasada was a dissident leader who wanted to force changes in the party from within the party. When he refused to join his friend Pawar in 1999, it was not the first time that he had chosen not to leave the Congress.

“I have nothing personally against Sonia Gandhi, but I want recognition from party workers. I’m contesting to uphold the right to dissent and internal democracy,” he was reported to have said after becoming the first Congress leader in fighting a member of the Nehru-Gandhi family for the post of Congress chief after Independence.

He did a countrywide tour, of course, without much support from Congress units. Senior journalist Iftikhar Gilani, who reported on the Congress for years, told IndiaToday.in, “When Prasada went to the Congress’s office in Lucknow to drum up support, it was locked. There was no one. No Congress person wanted to be seen with him. I don’t think it was Sonia Gandhi’s diktat, but this is how the Congress functioned.”

There were other challenges, too. If the likes of Shashi Tharoor and Manish Tewari recently called for a free and fair election and asked the party to publish the list of voters with their phone numbers and addresses, Prasada was making the same demands 22 years ago. A Congress member must have the support of 10 voters to be able to file her nomination, but it can be rejected if those backing the aspiring candidate turn out to be non-voters.

“When Prasad went to the AICC office in Delhi to inquire about the details of voters, similar non-cooperation greeted him. I must say he showed remarkable courage and conviction despite the odds clearly against him,” Gilani said.

The expected happened. Of the 7,542 valid votes in the November 2000 election, Prasada got just 94. Sonia polled 7,448 or 98.75 per cent of the votes cast by delegates of Pradesh Congress Committees (PCCs).

“At the AICC session to formalise Sonia’s presidency, Prasada was heavily hooted. She had to bring the house in order,” Gilani said, recalling how Prasada had written several letters to the party’s election authority to allege a rigging of the list of voters, whose number has now increased to about 9,000.

Before, during and after the election, Prasada said the process was rigged. But he also conceded in private that even a fair process would not have ensured his victory. He fought for fairness, an election ideal the Congress does not seem to have achieved even now, some would argue.

Prasada died in a Delhi hospital in January 2001 following a cerebral haemorrhage. His son, Jitin Prasada, is now with the BJP, serving as a minister in the UP government.

WHAT NEXT FOR CONGRESS

It’s been 22 years since that election. And during this time, there has been no election for the post of Congress president. Sonia has remained at the helm, minus a two-year stint by her son, Rahul Gandhi, who is into his third week of a five-month Bharat Jodo Yatra from Kanyakumari to Kashmir and has said a Gandhi family member would not become the party chief.

Now, an election is finally happening. And a non-Gandhi (whether Mallikarjun Kharge or Shashi Tharoor or anybody else) is set to be the president tasked with reversing the party’s electoral misfortunes, carrying out intra-party reforms, stopping the flow of exiting leaders and addressing the concerns of the reform-seeking pressure group called G-23.

The task will also include putting the Congress in the centre of the efforts to build opposition unity ahead of a string of state polls and then the national elections in 2024, when Prime Minister Narendra Modi will be seeking a third straight term.

It’s a task in which even the Gandhis have not succeeded in recent years. And the new president will also have limited authority, especially because he will be operating in times of not one but three active Gandhi family members: Sonia and her two children, Rahul and Priyanka.

Read | Why electing party president is such a challenge for Congress

The flagship Ram pickup is the 702-horsepower supercharged TRX truck. This is a trophy-truck-inspired supertruck ready for high-speed desert racing. It is not only the most powerful internal combustion truck, but it is one of the coolest and most capable pickups on the planet. But if you are going to ...

Pennsylvania Teen ADMITS to murdering girl, 13, on Instagram video showing his friend the victim's bloody legs and feet before asking to help bury the body