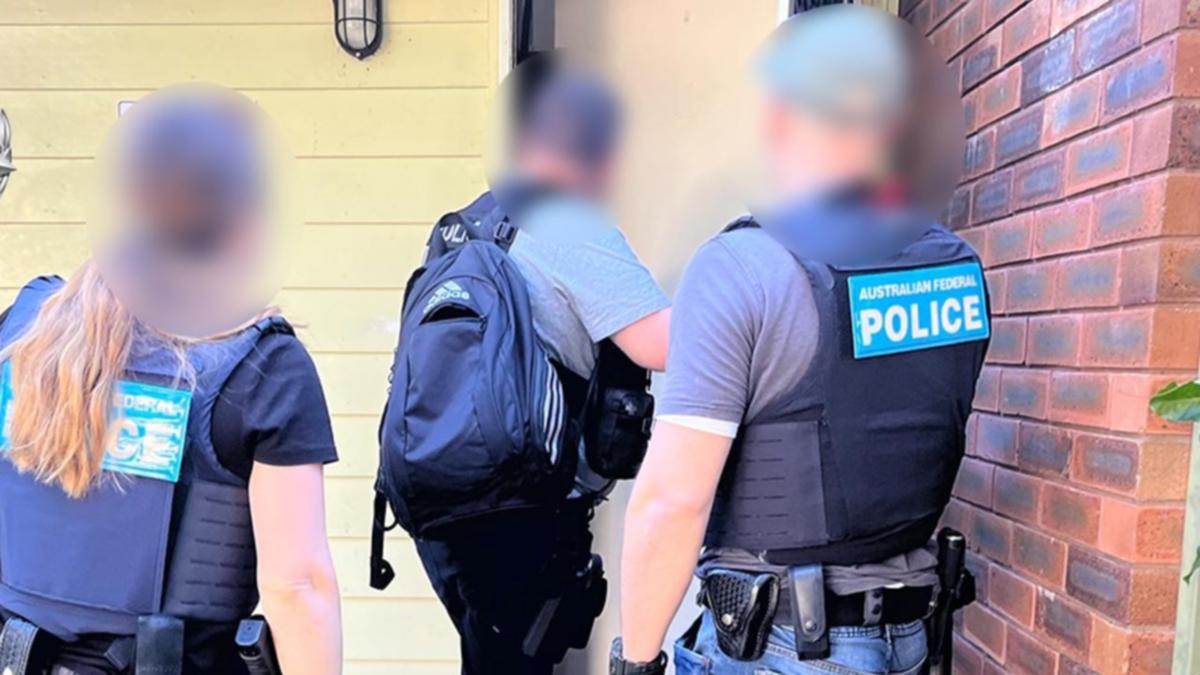 An alleged underworld criminal syndicate has been busted and millions of dollars' worth of ice, GHB, guns, jewellery and cash has been uncovered across three states.

Two men, including one with a suitcase containing more than 16 kilograms of ice, were arrested in Sydney on Wednesday.

That sparked a series of raids across Sydney's inner suburbs and the discovery of a secret methamphetamine lab and $1.5 million in cash at a house near Sydney airport.

Another 50kg of methamphetamine hidden in industrial plastic rolls was found at a nearby property, as well as 100 litres of GBL – a commonly used date-rape drug that converts to GHB in the body.

The older man was also charged with using a weapon to prevent lawful detention and assaulting a police officer.

Both men were refused bail and are set to appear at Downing Centre Local Court on November 15.

A 37-year-old man arrested at the makeshift drug lab was charged with two counts of drug supply and knowingly allowing their home to be used as drug premises.

He was refused bail and is set to appear at Newtown Local Court on September 29.

The operation then moved interstate, with police raiding properties in Western Australia and Queensland.

Seven kilograms of methamphetamine, more than $250,000 in cash, watches and jewellery valued at about $150,000 and a small amount of cocaine was found at an industrial unit and serviced apartments in Perth's northern suburbs.

Two men – aged 32 and 34 – were arrested at the industrial unit and have been charged with trafficking a commercial quantity of methamphetamine and dealing in the proceeds of crime.

They were refused bail with both to appear before Perth Magistrates Court on Friday morning.

AirPods Pro 2 vs. Bose QuietComfort Earbuds 2: Which noise-cancelling earbuds should you buy?

Nicole Scherzinger captured attention as she took to the stage with Andrea Bocelli at London’s O2 arena on Friday night. The Pussycat Dolls singer, 44, dazzled in a sparkling silver studded gown with a matching high-neck cape as she showed off her vocal talents. She accessorised her show-stopping ensemble with a pair ...


View more: Nicole Scherzinger dazzles in a sparkling silver gown and cape as she takes to the stage with Andrea Bocelli at London's O2 arena

Kim Kardashian put her best fashion foot forwarded as she departed her daughter North’s basketball game in Los Angeles on Friday. The reality star, 41, looked stylish in a brown cropped sports jacket with black piping details, which she teamed up with matching high-waisted joggers. Elevating her height with heeled Balenciaga ...

Rihanna looked incredible on Friday as she head out for a lavish meal at Giorgio Baldi in Santa Monica. The pop icon, 34, put on a glamorous display in a stylish black velvet gown and a matching clutch. She was adorned in diamonds as she sported a chunky necklace and ...


View more: Rihanna puts on a glamorous display in a velvet gown and a dazzling diamond necklace as she heads out for a lavish meal in Santa Monica

Prince Nikolai, Prince Felix, Prince Henrik, and Princess Athena of Denmark will be renamed Counts in the new year. via REUTERS Prince Nikolai of Denmark is “shocked” over his grandmother Queen Margrethe II’s decision to strip four of her grandkids of their royal titles. Nikolai, along with his brothers ...

Jaime Winstone dressed to impress on Friday night as she donned a glamorous dress to the press night performance of Giacomo Puccini’s Tosca at the at London Coliseum. The actress, 37, wowed in a red satin dress as she posed for snaps at the event which kicked off the ENO (English National Opera) ...


View more: Jaime Winstone cuts a glamorous figure in a red satin dress as she joins a chic Nicole Appleton and husband Stephen Haines at the Tosca press night performance

A Michigan man shot and wounded an 84-year-old pro-life canvasser at his home last week, officials said. The homeowner, 74-year-old Richard Harvey, surrendered to police on Friday and was charged with felonious assault and reckless discharge of a firearm causing injury in the Sept. 20 shooting, according to Ionia ...

6PR radio presenter Liam Bartlett has announced his surprise resignation from the Nine Perth-based radio station. The Perth shock jock — who is also a 60 Minutes reporter — will quit both roles in November. Bartlett revealed the decision in a statement read by colleague Mark Gibson on Friday evening. ...

Lottie Moss cut a sizzling figure as she walked hand-in-hand with her stylist pal Danyul Brown while arriving at his 30th birthday party in London on Friday. The younger sister of Kate Moss, 24, captured attention in an all-black lace-up ensemble as she stepped out at the The Windmill Soho for ...


View more: Lottie Moss puts on a busty display in a leather black corset and lace-up trousers as she holds hands with stylist pal Danyul Brown at his birthday party

'Bless you, I know it's painful!' Eamonn Holmes, 62, lauded by fans as he posts painful-looking throwback snap of his swollen face caused by shingles

Kourtney Kardashian shares her love for fall in a series of snaps featuring husband Travis Barker and her kids: 'There’s just something about fall!'

'It's been painful for both of them': Hollyoaks' Callum Kerr 'SPLITS from fiancée Olivia Anderson'... just a year after they got engaged

Rental crisis forcing people into homelessness and living in their cars

Showers over the eastern states make for grey long weekend

Plastic cup ban in force in WA from Saturday

Andrea Bocelli shows talent runs in the family as he takes to the stage at London's O2 alongside son Matteo, 24, and daughter Virginia, 10

Ubisoft, Bungie, and Others Working on Stadia Game Save Transfers