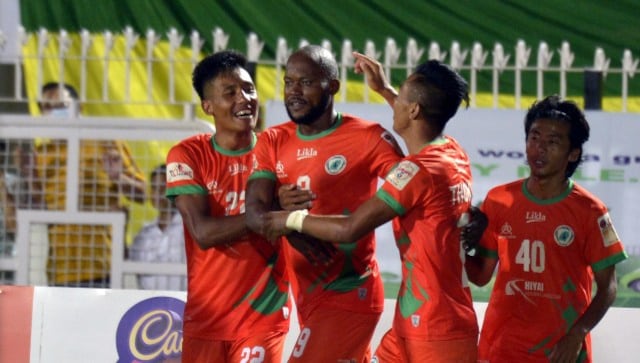 Imphal: NEROCA FC put up a dominating show to beat local rivals TRAU FC 3-1 in a Group C fixture of the Durand Cup at the Khuman Lampak stadium in Imphal on Thursday.

The first ever ‘Imphal Derby’ got off to an intense start with Tangva Ragui putting the Orange brigade ahead in 16th minute, only for Komron Tursunov to equalise three minutes later.

But thereafter it was a NEROCA domination all the way as Thomyo headed in the 36th minute to snatch back the lead.

Nigerian John Chidi took advantage of a defensive error to score the insurance goal in the 50th minute.

This was the first game in Group C and the first ever football match in the state of Manipur as for the first time Asia’s oldest football tournament is being held in multiple venues of Kolkata, Imphal and Guwahati.

Derby nerves were clear as tough football was on display right from the starting whistle.

TRAU had the first shot at goal but goalkeeper Soram Porei was more than up to the task.

But the Orange brigade took the lead following a good team effort with John and a cross from Lunminlen Haokip, which was brilliantly side-footed into the net by Tangva.

NEROCA’s joy, however, was short lived as the classy Tursunov got on the scoresheet, getting at the end of a cross from Khanngam.

Attacks continued from both ends with NEROCA slowly getting the upper hand and finally got their reward when Thomyo headed in from a cross by the overlapping Singson.

Any hopes for a TRAU win went up in smoke just five minutes into the second-half from a defensive lapse.

John intercepted a back-pass to the goalkeeper and calmly slotted it home to complete the tally.

TRAU tried their best in the last 10 minutes but goalkeeper Porei thwarted all their efforts.