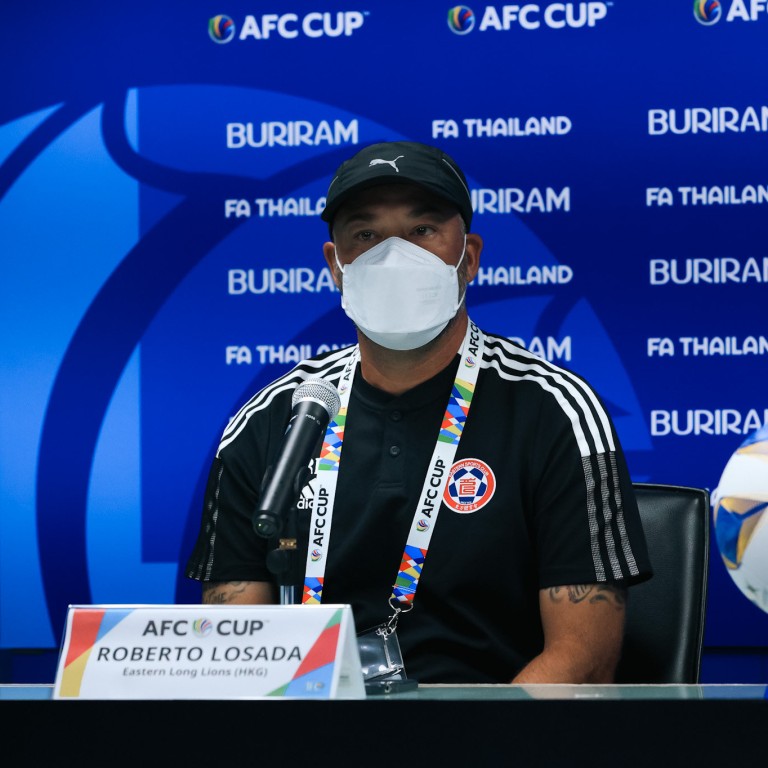 Lee Man and Eastern Long Lions will battle out in an all-Hong Kong affair as they look to secure a spot in the next round of the 2022 AFC Cup.

The winners of the group J match in Buriram, Thailand on Friday are favoured to top a group which also features Tainan City of Taiwan – widely considered the weakest among the trio after the withdrawal of Macanese side MUST CPK.

The three sides met at the same stage of the regional tournament last year when Lee Man came through after winning all of their group matches, securing a slender 1-0 victory over Eastern.

While last year’s competition took place at the end of the season in Hong Kong, the 2022 edition has been completely different, with the domestic campaign abruptly abandoned in January amid the fifth wave of Covid-19 infections in the city.

“It has been very difficult for us, a very tough time, because of the [social distancing] measures in Hong Kong are very tight,” Eastern head coach Roberto Losada said at the prematch press conference. 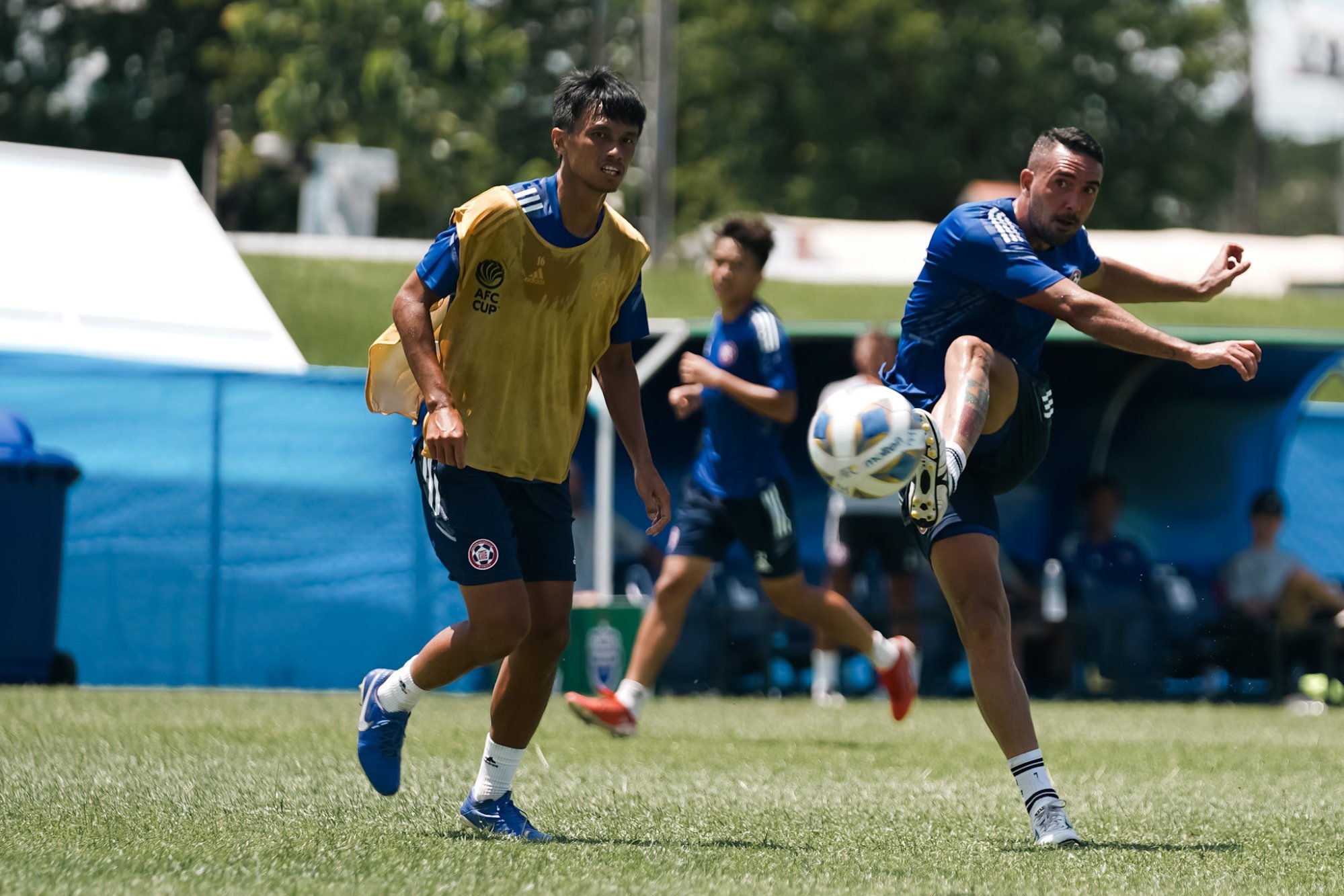 “Our players could only keep training by running in the parks. They made a big effort to try to keep fit, but obviously you cannot stay as sharp and fit as you wish when you can’t train on a pitch. It’s difficult and complicated.”

Eastern were also left short with eight of their players selected by Jorn Andersen for Hong Kong’s Asian Cup qualifiers, for which training began in early May.

“We have been training together for four to five days only since May 2,” said defender Leung Kwun-chung, one of the eight Eastern players who returned from India last week after securing a historic spot at the Asian Cup finals for Hong Kong.

“We don’t have too much time for preparation together and we all know how difficult it will be.” Eastern’s numbers had already been depleted, with four of their foreign players leaving the club last month when their contracts expired.

Midfielder Matthew Lam and defender Fung Hing-wa – who played for Hong Kong in India – also departed the club last week, while Yue Tze-nam was sent home from India after testing positive for Covid-19.

Despite all of the difficulties, Losada said he is still looking forward to achieving a good result in the tournament. 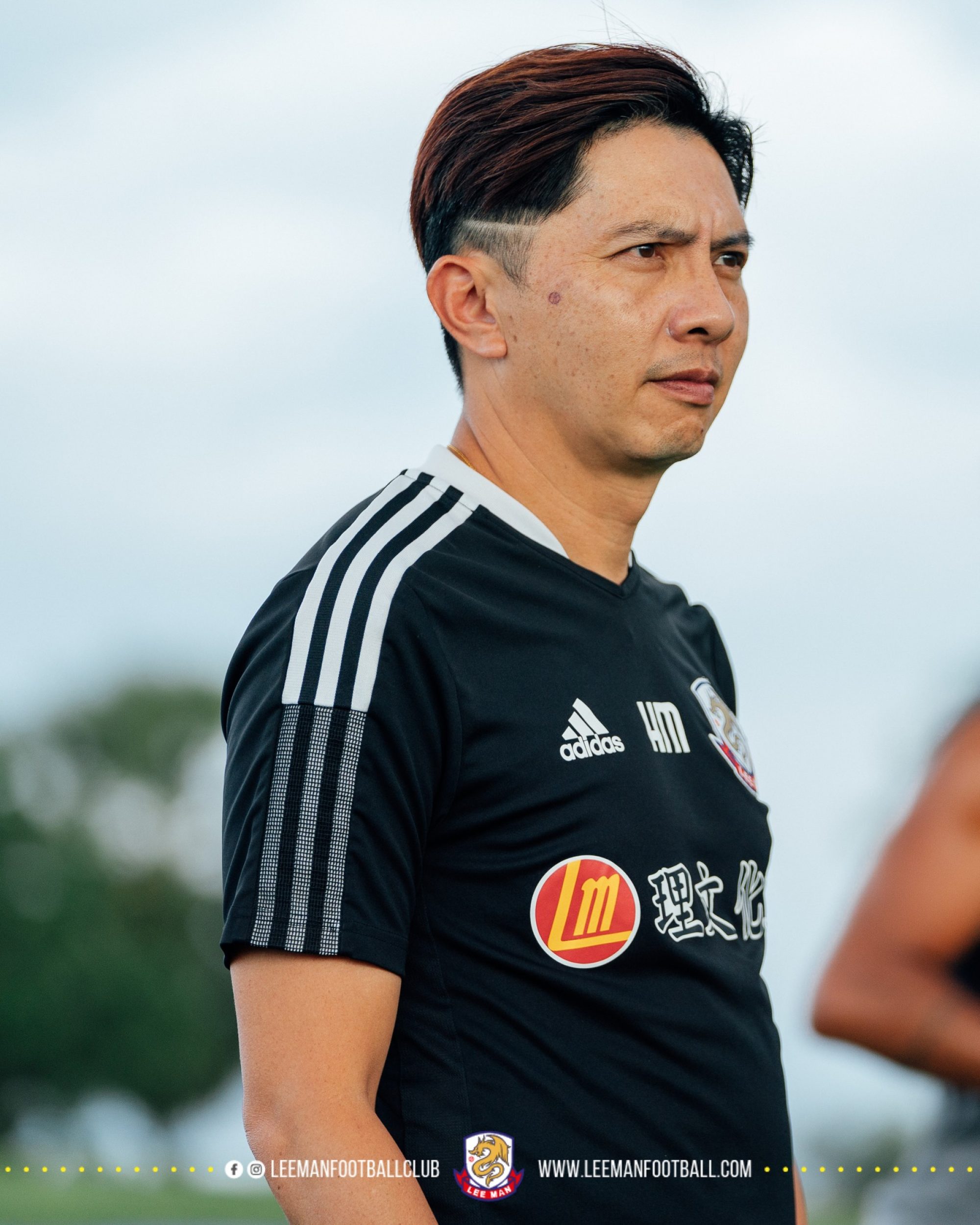 “We always want to go through to the next round and although we have come across so many difficulties, we have never changed that,” he said. “Almost half of the squad has gone but you cannot complain. You have to trust the players, believe them.

“Lee Man are one of the best in Hong Kong – good players, a good coach and a good squad. But we will try to make it difficult for them.”

Lee Man head coach Chan Hiu-ming remained cautious ahead of the important tie which is likely to decide the outcome of the group.

“Eastern seem to have many problems this year. But if you look at their starting 11, they are still a formidable side with most of the players either Hong Kong national team members or quality foreign players,” Chan said. 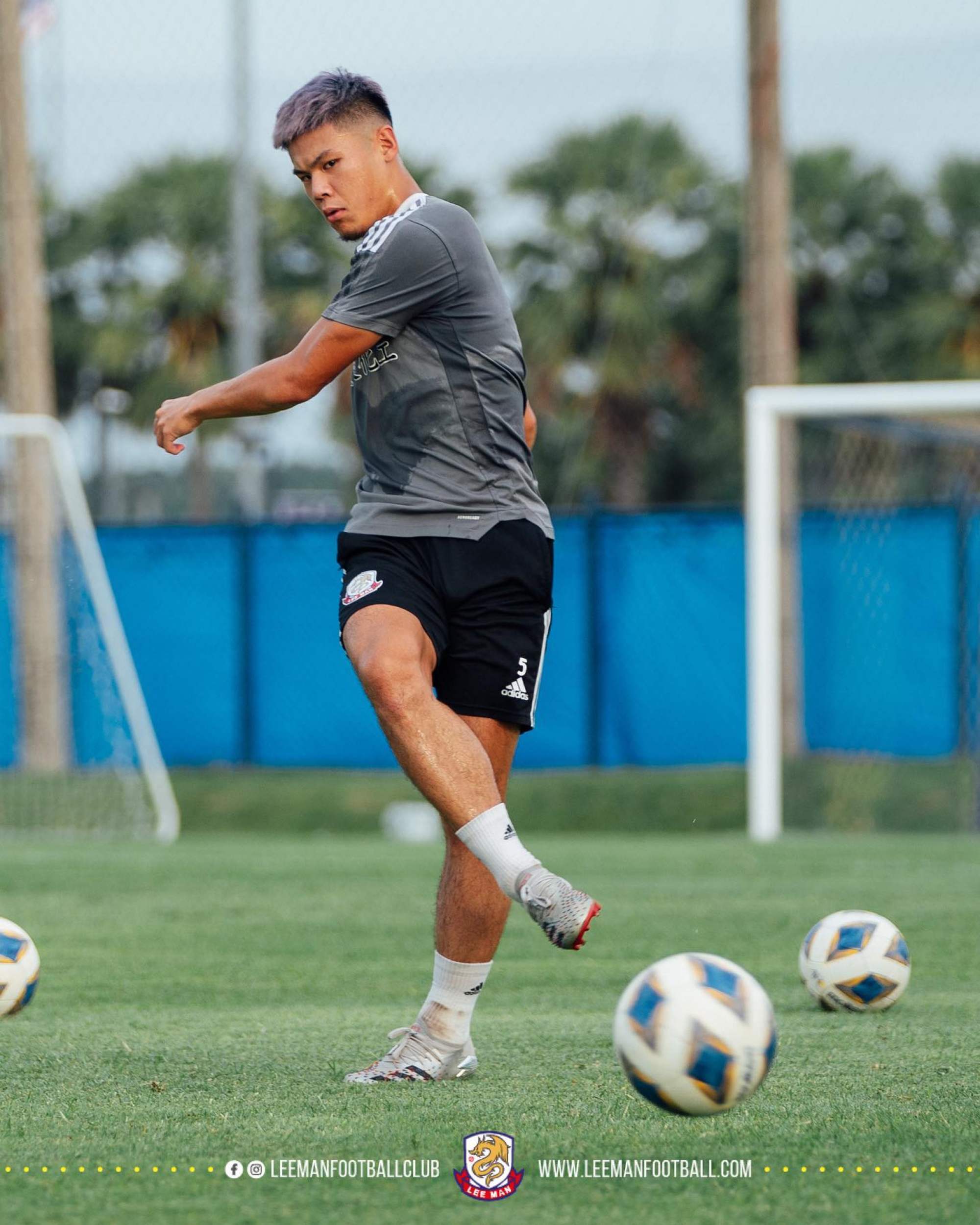 “Our major problem remains a lack of competitive matches for a long period of time since the season ended prematurely in January. The players look fine since our arrival in Thailand for the training camp but they have not been put under any real test.

“But of course our target is to win the group, just like what we did last year and it’s not only Eastern – Tainan City are also of some quality, especially since their league season was still ongoing before they came to Thailand.

“We cannot take things for granted and will ask the players for the best possible start.”

'What a match! Just brilliant': The Duke and Duchess of Cambridge approve British No 1 Cameron Norrie's thrilling five-set win over David Goffin as tennis-loving stars hail his progress to the Wimbledon semi-finals

New Tottenham signing Richarlison handed legendary No 9 shirt as Antonio Conte continues to build his new-look side, with the Brazillian following in the footsteps of Gareth Bale, Jimmy Greaves and Dimitar Berbatov

'Those guys made their bed, so leave us alone': Billy Horschel accuses the Saudi-backed LIV Golf defectors of being 'hypocrites and liars' and tells them to stay away from PGA Tour and DP World Tour

Manchester United outcast Andreas Pereira agrees to join Fulham after the clubs agree a £10m deal for the midfielder... who has not played for the Red Devils in nearly TWO years

NASSER HUSSAIN: Rob Key was right... it's been one hell of a ride watching England this summer! How could we have doubted his decision to appoint Ben Stokes and Brendon McCullum?

Novak Djokovic at Wimbledon 2022: Love affair with Centre Court will only be complete if he stops Rafael Nadal

Wimbledon title favourite Ons Jabeur battles past Marie Bouzkova to reach the semi-finals as her bid to become the first Arab woman to lift the title remains on track... with her 'great friend' Tatjana Maria up next

Cameron Norrie struggles to hold back emotions after his stunning five-set victory over David Goffin to make the semi-finals at Wimbledon... as he insists he's 'going to take it' to Novak Djokovic in a bid to reach the first Grand Slam final of his career

'The amount of s*** written about me is something I've never had to deal with':  Graeme McDowell admits his legacy has been tainted 'in the short term' over his decision to join LIV Golf but insists the narrative 'will have to change' about the series


View more: 'The amount of s*** written about me is something I've never had to deal with':  Graeme McDowell admits his legacy has been tainted 'in the short term' over his decision to join LIV Golf but insists the narrative 'will have to change' about the series

Ajax table a £28m bid for Tottenham winger Steven Bergwijn after talks between club chiefs Daniel Levy and Edwin van der Sar, with the Dutch giants hopeful of a resolution as they eye up a summer swoop


View more: Ajax table a £28m bid for Tottenham winger Steven Bergwijn after talks between club chiefs Daniel Levy and Edwin van der Sar, with the Dutch giants hopeful of a resolution as they eye up a summer swoop

How Does Julio Rodriguez's Dominant Rookie Season Measure Up Against Ken Griffey Jr.?

USA Today Julio Rodriguez is making a name for himself out West. The Seattle Mariners center fielder is exceeding the already-high expectations of his first MLB season and building a convincing case for AL Rookie of the Year as we approach the All-Star break. But how does Rodriguez measure ...


View more: Southampton open talks with Rangers over £10m deal for Joe Aribo with the Saints hoping to beat Premier League rivals Nottingham Forest and Fulham to the Nigerian midfielder

FOOTBALL LEGACY PREP WENT 3-7 OVERALL IN 2021, WHILE REACHING THE REGIONAL ROUND OF THE TAPPS DIVISION III PLAYOFFS. The Lions registered a win over John Paul II (28-12)in the Area Round to reach the Regional Final, where they fell short to Bay Area Christian (35-21). Senior quarterback Tyler Prazak ...

USA TODAY Major League Soccer club Toronto FC is set to land another international star. Federico Bernardeschi reportedly is signing with Toronto on a free transfer from Serie A side Juventus, according to ESPN’s Taylor Twellman: Bernadeschi from @juventusfcen will be signing with @TorontoFC on a free. #TFCLive #MLS ...

The 31-year-old defender is eager to return to Spain this summer (Pictures: Getty) Wantaway Chelsea defender Marcos Alonso will consider handing in a transfer request in an effort to secure a move to Barcelona this summer, according to reports. The left-back is believed to be Xavi’s top choice to ...

Juventus 'have reached an agreement to sign Paul Pogba on a four-year contract'... with the French midfielder returning on a free transfer six years after he was sold to Manchester United for a then-world record £89m

MIKE DICKSON: Nick Krygios' charge of common assault against his ex-girlfriend could hardly have come at a worse time in terms of tennis, with the Australian preparing for his biggest match in more than seven years

England's roaring Lionesses are primed for their pressure cooker Euro 2022 opener against Austria, as captain Leah Williamson insists they 'intend to use sold-out crowds' to spur them on

IAN HERBERT: England desperately need a triumph for the ages at Euro 2022 to accelerate demand and growth... and by winning, they would shape the history of the women's game within these shores

F1 news: Mercedes positive about ‘clear route’ back to top after porpoising nightmare

Is Cristiano Ronaldo to Chelsea a minefield Todd Boehly must avoid... or could it actually work? Thomas Tuchel has struggled with big egos in the past, but the Blues need a striker and he could be the PERFECT quick fix

Wolves willing to listen to offers for Morgan Gibbs-White as attacking midfielder stalls on new contract, with Everton and Nottingham Forest interested in £25m-rated midfielder

World Games: how Hong Kong’s Grace Lau could have ‘home’ advantage in Alabama

Newcastle 'ready to break their transfer record to land Bayer Leverkusen winger Moussa Diaby'... but 'could move for Anthony Gordon or Callum Hudson-Odoi if Germans refuse to budge on £60m fee'

Tottenham 'make enquiry for Barcelona forward Memphis Depay' as Antonio Conte looks to strengthen his attack further, with Spanish side willing to listen to offers for the Manchester United flop in the region of £17m

Christian Eriksen is a shrewd signing for Man United and could work well under Erik ten Hag... he has a point to prove after a poor end to his Spurs career and mixed fortunes at Inter, while added competition may inspire out-of-sorts Bruno Fernandes

'The athleticism, the speed, the strength, the power': Alex Oxlade-Chamberlain insists 'you know what you're going to get' with new £85m record signing Darwin Nunez... and compares him to fellow South American Luis Diaz

'We enjoyed some amazing moments and big wins all together': Mauricio Pochettino waves farewell to PSG with a touching message on social media after his sacking was confirmed, as he wishes them 'the very best'

Leah Williamson: England will embrace expectations of home Euros as ‘pressure is a privilege’

Derby fight off interest from Luton Town and Huddersfield for the signing of Conor Hourihane... with the former Aston Villa midfielder having a medical ahead of signing two-year contract with Rams

Leicester open initial talks over a deal for 21-year-old star Orkun Kokcu with midfielder open to Premier League move... but must offload players first with several exits being discussed

Popularity of these Women’s Euros means players will be criticised, we have to be ready for that

'Perfect' Steven Gerrard will replace Jurgen Klopp as Liverpool boss one day, says Martin Skrtel... but former Reds defender admits he thought Jamie Carragher was 'the one' who would become a top manager

DOMINIC KING: Nobody was more of a bridge between Everton and their fans than Duncan Ferguson... his exit is a moment of great sadness but leaves a huge opening for a new Goodison Park icon

Real Madrid are the bookies' early FAVOURITES to next appoint Mauricio Pochettino as manager, with former club Tottenham, Manchester United and Newcastle also in contention as future destinations for the ex-PSG boss