Endurance athlete, 44, plans to run 40,000km around the world in extreme charity fundraiser that will cross four continents and take three-and-a-half YEARS

Tomasz Drybala, 44, is training for a 40,000km run around the world Tomasz, who is originally from Poland, is training by running through the UKHis 40,000km feat starts on 29 August, taking him all the way to the USHe will be raising money for UNICEF along the way and doing many events

A runner is preparing to run 40,000km around the world to raise money for charity.

Polish ultra-runner Tomasz Drybala, 44, who has lived in London for 21 years, plans to spend more than three years running around the world in stages: from London to Athens; from Cairo to Kuwait City; from Indonesia up through South East Asia to Hong Kong; then from the West to the East coast of the US, starting in Los Angeles and finishing in New York.

Tomasz will travel between each stage by air, and has planned regular trips back to London in order to see his two sons. 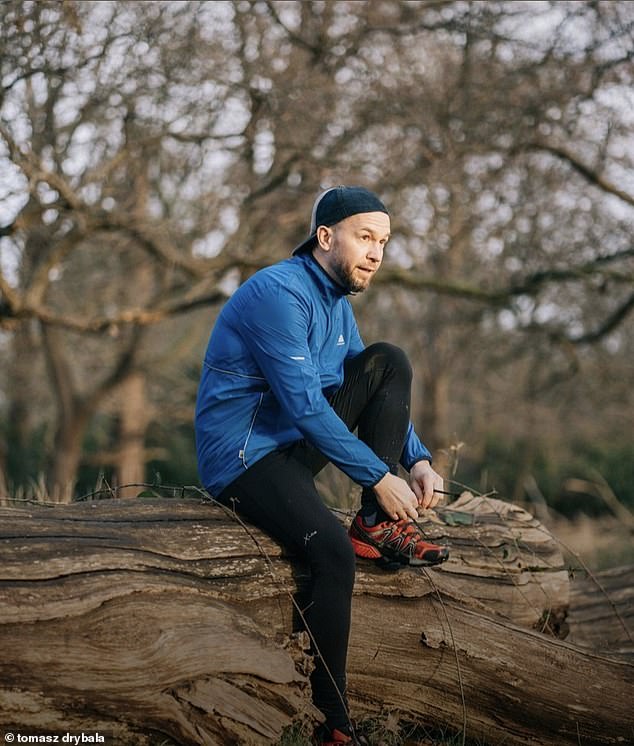 Polish ultra-runner Tomasz Drybala, 44, who has lived in London for 21 years, plans to spend more than three years running around the world 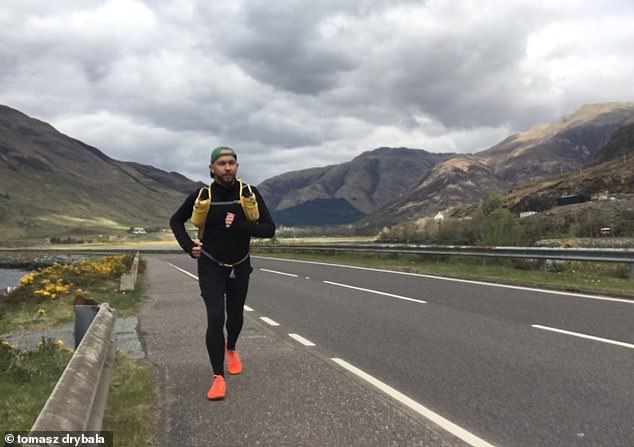 Tomasz will travel between each stage by air or sea, and has planned regular trips back to London in order to see his two sons. Pictured, on one of his training runs

He will fund his journey through savings, sponsorship and will continue to work as a keynote speaker.

He explained: ‘We will have lots of equipment behind us and between stages (Europe-Arabia, Arabia-Asia, Asia-US) we have up to four weeks break.

‘It’s not a continuous run. It’s impossible to do it that way. We need time to reorganize our effort and transport all equipment to a new location.

‘My body needs time to recover, and I have two sons in London, and they need their father. We have planned weekend breaks every three weeks and breaks during all half-terms for me to see my boys.’ 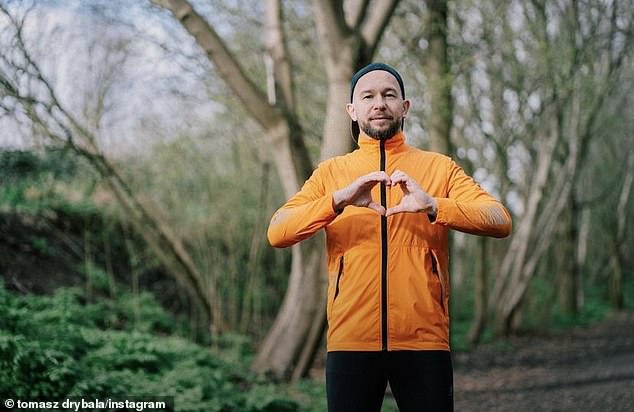 Tomasz, who intends to set off in August, will initially stay at a string of hotels. A support crew with a caravan will join him full-time at the end of October 2022, allowing him to rest on the road and save money

Tomasz, who intends to set off in August, will initially stay at a string of hotels. A support crew with a caravan will join him full-time at the end of October 2022, allowing him to rest on the road and save money.

The runner aims to run the circumference of the earth: 40,075km.

He is training by running around 40km a day across the UK.

He said: ‘I do these runs by myself. I just run with a backpack. And I am running from hotel to hotel.

‘One of the days I ran 56km. I was running 40km uphill and the last 16km was down hill. I ran out of water twice. It was quite difficult.

‘I am slowly lifting up the distance every week. At the current time I am running around 50km a day.

‘I will get to running 300km a week, around 1,350km a month. I am running Monday, Tuesday, Thursday and Friday.

‘And I am reaching up to 75km a day. I will finish this in the first two weeks of July.’

Tomasz started long-distance running in 2018 as a way to improve his mental health.

He said: ‘And then I got divorced. I lost my business and I was in a bad mental health condition for a time.

‘And I just needed to do something with myself and I decided to start training for big challenges.’

His first challenge, in 2019, was to walk 5million steps in 100 days. He increased his steps and by the end of the challenge was exercising for 12-14 hours a day.

Next he attempted to run 11,000km from Hanoi, Vietnam, to Bali, Indonesia.

However he was forced to curtail his plans when lockdown hit.

‘I escaped Indonesia to Sumatra where I was supposed to keep running but I was not able to run,’ he said. 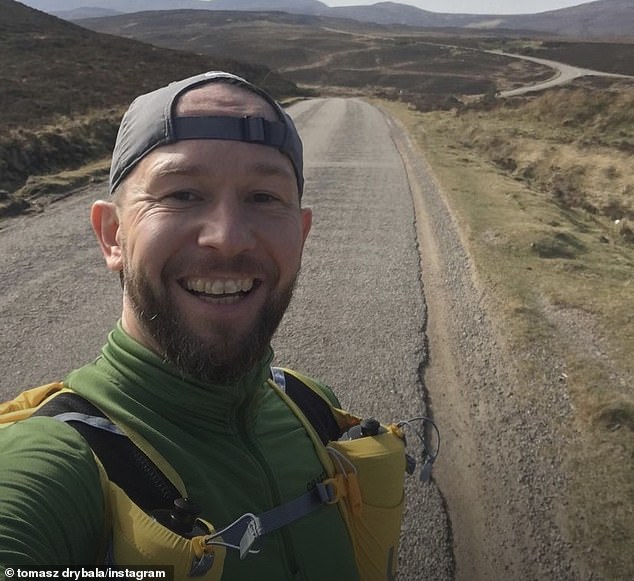 Tomasz, who trained partly in Scotland, has done his epic challenges and raised money for charity since 2018 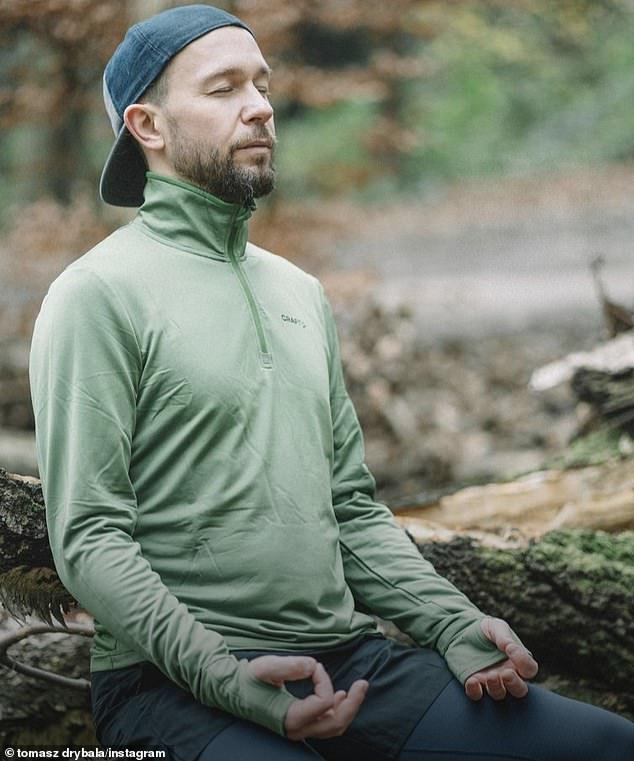 The 44-year-old is hoping to finish his run around the world by the end of 2025, stopping along the way for a swathe of events to raise money for Unicef

‘Indonesia was never in a full lockdown but you can’t move even from one village to another village so I wasn’t able to go even to the airport.’

Stranded in a small village, Tomasz adapted his plan and ran 225 half-marathons instead.

Tomasz, whose own childhood was affected by trauma, will raise money for Unicef, and document his journey on Instagram.

He plans to work with local communities and businesses along the way, informing them about childhood traumas.

He added: ‘I don’t set out to beat any world record. I’m running with a message and building trauma-informed communities along the way of my running route. The journey is rewarding in itself.’

Tomasz is hoping to finish his amazing world marathon task by the end of 2025, stopping along the way for a swathe of events to raise money for UNICEF. 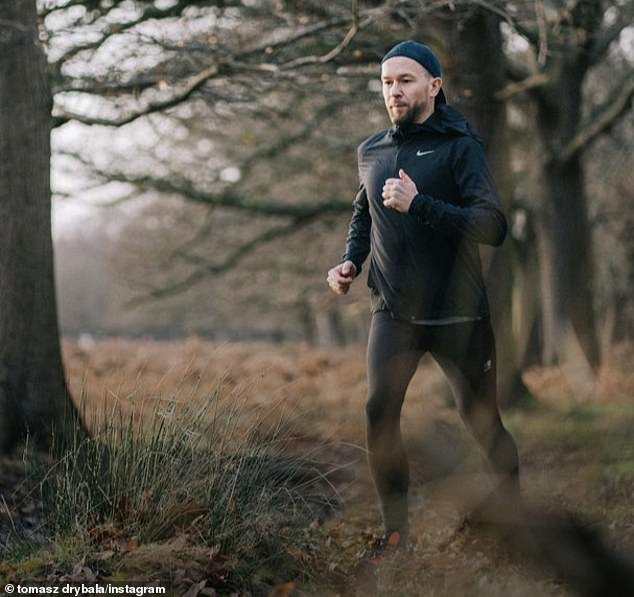 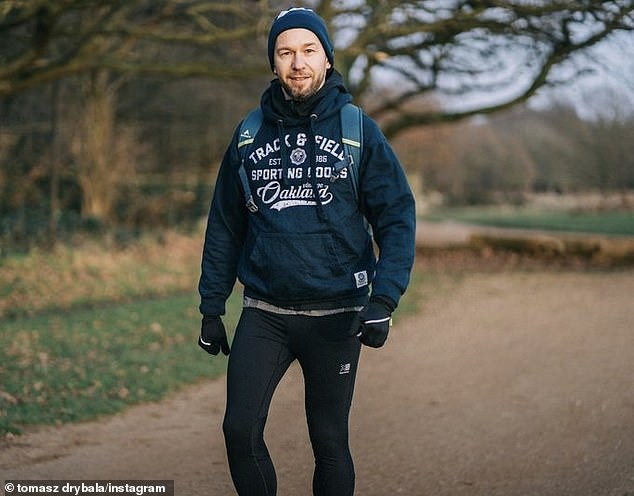 NRL pundits SLAM Taane Milne for brutal hit on Spencer Leniu as Gorden Tallis and Andrew Johns claim swinging tackles have been outlawed in rugby league in over 40 years: 'Is that the WORST shot you have ever seen?'

Arsenal have been dealt a huge injury blow ahead of next week’s North London Derby. Mikel Arteta would have been hoping to have a near full-strength squad for the clash against Tottenham on October 1. But the Spaniard will now be sweating on the fitness of Thomas Partey, who reportedly ...

Here is the world's shortest IQ test, made up of just three questions

Professional and DIY IQ tests are popular because they offer a formula that allows you to compare yourself to other people and see how average (or above average) your intelligence is. The Cognitive Reflection Test (CRT) is dubbed the world’s shortest IQ test because it consists of just three questions. ...


View more: Here is the world's shortest IQ test, made up of just three questions

The decision came a day after Kyle Lafferty was sent home from international duty.

Maisie Smith sweetly tributed her boyfriend Max George on Saturday as she stepped out wearing his a tracksuit with his surname printed on the back. Penning that it was ‘wear your boyfriend to work day’, the EastEnders actress, 21, reshared the snap to Instagram after her new singer beau, 33, ...


View more: 'Wear your boyfriend to work day': Maisie Smith, 21, sweetly tributes her beau Max George, 33, as she dons a tracksuit printed with his name

'I'd need a lot of hypnotherapy sessions before I agree to that!' Judi Love rules out taking part in this year's I'm A Celebrity... Get Me Out Of Here!

'It took me 2 weeks to post this but it's real!' Lottie Tomlinson shows off her postpartum figure as she gets her confidence back after gaining 3.5st during pregnancy

New York DEFIES Republican book bans: Brooklyn Public Library is slammed for offering schoolkids across the US access to banned books - deemed sexually explicit or racist and outlawed in red states - with its eBook subscription

'Weird', 'Why?' - Journalist shocked by what's happened to Arsenal star on international duty

Ryanair, easyJet, BA: Airplane seats you should avoid at all costs ahead of half-term break

Husband 'pummelled' defenceless wife's after finding her in bed with neighbour

Video: Strictly Come Dancing 2022: Kym Marsh is set for a jive while Helen Skelton will strut her stuff to an American smooth as first songs and dances are revealed

The best thing on TV right now? A bunch of bankers

'I hoped I'd have the opportunity there to finish it': Rylan Clark planned to take his own life at psychiatric hospital so his mum wouldn't find his body - after marriage split and breakdown

Meet the judges of the NI Social Media Awards!

Family of one of the Queen’s pallbearers had ‘no idea’ about his role: ‘I’m beyond proud’

Video: Classical singer Katie Noonan divides footy fans with her operatic rendition of Advance Australia Fair at the AFL Grand Final: 'She started out at a dolphin decibel!'

Video: Geelong fans go wild after massive AFL Grand Final win while devastated Swans supporters cry in the stands at the MCG and Sydney is left looking like a ghost town

Newt Gingrich slings insult at NBC news reporter telling him he has a 'learning disability' when pressed about Jan. 6 committee