When folk discuss the legacy of Super Saturday, they might not realise how it links to the athlete who stands to be the best of Britain for a decade.

It is necessary to think in those terms, for tonight, a decade and two days on from that crowning moment of London 2012, one of its viewers, Keely Hodgkinson, hopes to win a gold of her own at a home Commonwealth Games.

That the Olympic and world 800metre silver medallist is an athlete at all is largely down to what she saw from Jessica Ennis-Hill on that storied night, with the inspiration of her heptathlon gold medal responsible for a 10-year-old Hodgkinson going back on a decision to quit the sport. Now 20, and favourite to win a tough 800m final, Hodgkinson recalls the significance of that night to her own life. 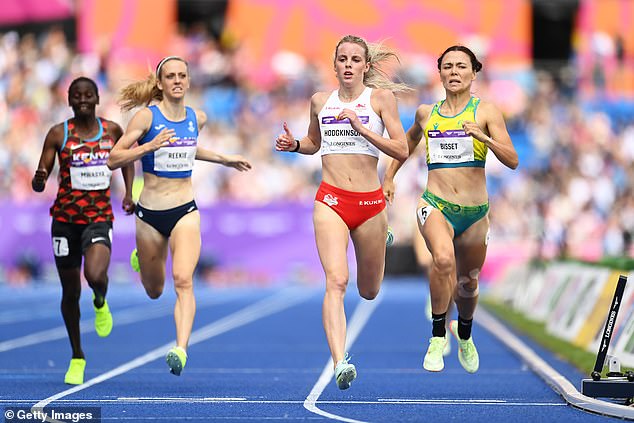 Hodgkinson ran a 2:00.18 at Alexander Stadium to win her heat and qualify for the 800m final 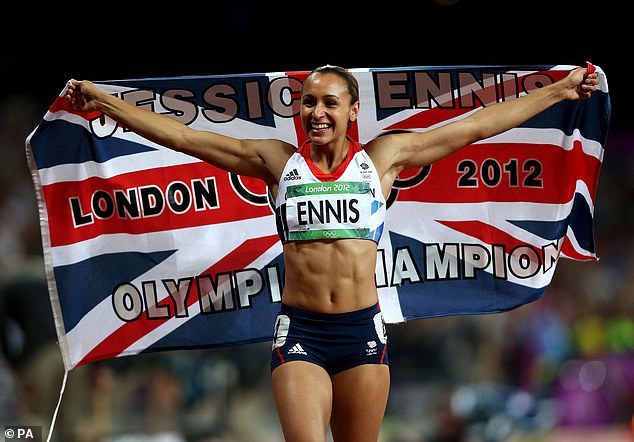 ‘I did athletics for a bit, and then I actually quit,’ she said. ‘But I came back after seeing Jess being the female star of the London Olympics — I thought she was amazing.

‘Doing what she did was remarkable. She sent me a few messages before the Tokyo Olympics, I told her she was one of the reasons I went back.’

The upshot has been a middle-distance runner of such talent that experts put no limit on what she might achieve.

A clear opportunity exists tonight on a decisive day for a number of Britain’s best track runners, including world champion Jake Wightman in the 1500m, Laura Muir in the same 800m race and Zharnel Hughes in the 200m.

There will be no Athing Mu, the US star who beat Hodgkinson at the Olympics and the worlds in Eugene, but as well as Muir, there is also Kenya’s Mary Moraa, who won bronze behind her in the US last month.

Video: Ella Toone's '10 out of 10' final goal, the 8-0 demolition of Norway and showing nerves of steel to fight back against Spain… the top 10 moments of the Lionesses' triumphant Euro 2022 campaign

Video: 'You are a national hero:' Bobby Zamora hails Euro 2022 match-winner and lifelong QPR fan Chloe Kelly after she mimicked his 2014 play-off final celebration during the Lionesses' 2-1 triumph against Germany

'I had a tear in my eye': Former England No 1 David Seaman admits Lionesses' 'special' Euro 2022 triumph made him emotional and tips women's football to get 'bigger and bigger'... as he hails 'amazing' keeper Mary Earps

The slaughter that was spun as a great triumph: Shattered bodies littering the beach, and an entire regiment cut down 'like a turkey shoot'... As a new book reveals 80 years on, Mountbatten still tried to claim the catastrophe at Dieppe was part of a plan

England rise to fourth in world rankings after Euro 2022 triumph

How to complete Fever Dream Triumph in Destiny 2

Image via Bungie Guardians looking to complete the Season of the Haunted Seal and earn the title of Reaper have some work to do. One particular Triumph, Shadow’s Return, is a series of other Triumphs gathered like a pyramid scheme. Fever Dream is one of the said Triumphs required. ...


View more: How to complete Fever Dream Triumph in Destiny 2

Danielle Lloyd and daughter Autumn, nine months, are a match in identical blue swimsuits as model shows off her physique in scorching Dubai - after defending triumphant Coleen Rooney in libel trial

Danielle Lloyd swapped one heatwave for another as she relaxed in Dubai with her children on Monday – shortly after defending victorious Coleen Rooney in an ultimately disastrous libel trial initiated by Rebekah Vardy. The model, a former Miss England, showed off her slender physique in a powder blue swimsuit ...


View more: Danielle Lloyd and daughter Autumn, nine months, are a match in identical blue swimsuits as model shows off her physique in scorching Dubai - after defending triumphant Coleen Rooney in libel trial

Tennis: National Bank Open (Reuters) – Teenager Coco Gauff will become the new world number one in women’s doubles when the rankings are released on Monday after her weekend title win at the Canadian Open with fellow American Jessica Pegula. Gauff will move up from sixth to displace Elise ...


View more: Tennis-Coco world number one in doubles after Toronto triumph with Pegula

St Jude Championship Golf Will Zalatoris claimed his maiden PGA Tour victory in a dramatic playoff at the FedEx St Jude Championship. The American defeated Austria’s Sepp Straka in three extra holes at TPC Southwind – despite not making a birdie. The pair closed out 72 holes tied for ...

Victor Lafay (Cofidis) had come to the Arctic Race of Norway with some unfinished business from last year, when he was third on the queen stage and the final GC. On this 2022 edition, though, the French rider has managed to triumph atop the summit finish to Skallstuggu to claim ...

Gold up 4th Week in Row, Triumphing Over Inflation Data

'Every time I stood on the mat, it inspired me': UAE teen karate champ talks trials, triumphs

The Iconic Dive Bar Making A Triumphant Return To Hollywood

'If we did nothing, all of them would quite simply die:' The lead diver from the 2018 Thailand cave rescue shares his story of the triumphant recovery

Allan Langer broke his thumb throwing a punch at Paul Green... but the pair had a beer just ONE HOUR later! Broncos legend opens up on his friendship with 'great competitor' - and how he swallowed his pride after the Cowboys' Grand Final triumph

2023 Bajaj-Triumph motorcycle spied ahead of unveil

Tragedy and triumph — the fascinating life of Olivia Newton-John

Video: Lionesses Leah Williamson, 25, and Beth Mead, 27, jet off to Ibiza to celebrate their Euros triumph: Heroes tuck into steak and truffle fries at exclusive STK restaurant, dance the night away at Ushuaia nightclub before belting out the hits at karaoke bar

In watching the Lionesses triumph, I realised that patriotism can be a beautiful thing

Lionesses Leah Williamson, 25, and Beth Mead, 27, jet off to Ibiza to celebrate their Euros triumph: Heroes tuck into steak and truffle fries at exclusive STK restaurant, dance the night away at Ushuaia nightclub before belting out the hits at karaoke bar