England vs South Africa cricket 2022: when does women’s Test match start - dates, squads, how to watch on TV

Just a few days after the stated that he couldn’t see how much the Women’s Test story could evolve, Heather Knight will lead her troops into a one-off Test against Sune Luus’ South African squad.

This will also be the to have taken place since Katherine Brunt announced her retirement from Test cricket.

Brunt is the second this year to announce her retirement, after fellow bowler Anya Shrubsole announced she would be stepping down from all forms of international cricket.

Speaking to Sky Sport, England’s head coach Lisa Keightley said: “It’s over 10 years of (Shrubsole and Brunt) having the ball and doing what they do. They have had ups and downs in form but generally been very consistent.

Katherine will be a big loss in Test cricket. There are moments in games where she gets the team behind her and moments like that are going to be really hard to replace, as are her passion and fire.”

With only a few days to go before the Women’s Test match, here is all you need to know about the upcoming fixture…

When is the Women’s Test match?

England and South Africa will start their Test match on Monday 27 June and will conclude on Thursday 30 June 2022.

Every day of the Test will start at 11am BST/ 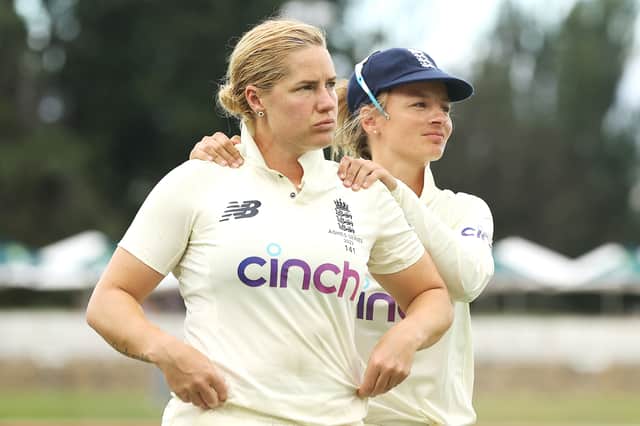 Where is the Women’s Test match taking place?

The two sides will face each other at County Ground, Taunton, Somerset.

The last Women’s Test that took place at this ground was between England and Australia which ended in a draw.

How to watch the Women’s Test match?

The Women’s match will be available to watch on Sky Sports live from 27 June.

Fans will also be able to watch the match through the Sky Go app on any compatible device.

What is their head-to-head record?

In the six Test matches they have played, they have drawn four and England have won twice.

The last Test match that was played between the two sides was in 2003.

How to buy tickets

Tickets are still available to purchase through the England and Wales Cricket Board. Go to their website to purchase your tickets.

Who is in the squads?

After the departure of Brunt and Shrubsole, England have named five uncapped players in the squad.

Seam bowlers Lauren Bell and Emily Arlott have not played for England in any format, while Alice Davidson-Richards, Freya Davies and Emma Lamb will all hope to make their Test debuts for their country.

Davies has played 24 white-ball internationals for England and Davidson-Richards is set to make her Test debut four years on from playing five T20 internationals and a one-day match.

Give kids sex education facts and teach them to be kind

Hyundai Ioniq 6 N to be revealed this month

How to Enable Google Maps for CarPlay on iPhone

Kevin Durant’s recent trade request sent shockwaves around the NBA, but not everyone is buying its veracity. ESPN NBA analyst Kendrick Perkins, for one, believes that Durant’s demand is merely a ploy. “I’m looking at it and I’m saying, ‘Why would KD want out?’” Perkins said on “NBA Today” on ...

A federal grand jury indicted GOP Rep. Tricia Derges on fraud charges after she falsely promoted a treatment she was selling at medical clinics as containing stem cells that could treat various disease including COVID-19. Nathan Papes/The Springfield News-Leader via AP A Missouri Republican state representative has resigned days ...

The Nets have clearly been perusing Indiana’s injury list. Brooklyn signed not one but two wings who missed all of last season for the Pacers. They inked Edmond Sumner after having already added T.J. Warren earlier Tuesday morning. “Journey not over,” Sumner tweeted Tuesday, with a prayer hands emoji. “will ...

LAS VEGAS — With the entire league gathered at NBA Summer League, this is the prime place and perfect time for Brooklyn to find trading partners for Kevin Durant and Kyrie Irving. But all indications are both dramas could drag on — and one or both stars could still be ...

The 2022 Championships at Wimbledon continue on Wednesday with two more quarterfinal matches on the men’s side. First up is a re-match between Rafael Nadal and Taylor Fritz, followed by a showdown between surprise package Cristian Garin and the mercurial Nick Kyrgios. Let’s take a look at the odds for ...


View more: What sword fails to do, soulful qawwali does: How Sufism works in tandem with Wahhabism

Live British Prime Minister Boris Johnson’s troubles have worsened after another senior member of his government abruptly quit – the latest in a string of departures on Wednesday. Alex Chalk resigned as solicitor-general for England and Wales, saying he could not “defend the indefensible”. “To be in government is to ...

After Federation in 1901, there was a nationwide competition to design the Australian flag. Ivor William Evans, 14, came up with the flag design that we know today as the symbol of Australia's sovereignty and connection to the British empire . But he needed to make it a reality. He asked ...

Boris is a ‘dead man walking’, Trevor Kavanagh tells Piers Morgan on TalkTV, but MP says ‘it’s not about the individual’

How to generate or reset your ATM Card's PIN? Check different ways