A rally calling for improvements to New Brunswick’s health-care system was held Saturday after a beloved member of Moncton’s Muslim community died in the Moncton Hospital ER while waiting for care.

The Moncton Muslim Association organized a protest outside the hospital Saturday, calling on the province to fix its strained health-care system.

Those at the rally said the man, identified as MS, was an active member of the association and described him as a kind person who would help anyone who asked.

Some members of this group broke down talking about MS — his unwavering kindness, his sense of community and his love for his family. pic.twitter.com/qSJTPdrkJI

Abdal Khan, who was at the rally Saturday, said he was a longtime friend of MS, who leaves behind five children.

According to a statement from the Moncton Muslim Association, MS showed up to the hospital Tuesday night and waited for six hours to see a doctor or nurse before he died.

The statement said he was a former kidney transplant patient who had recently undergone a medical procedure and was given instructions to return to the hospital if he had back or chest pain.

It said Tuesday night, one day after the procedure, he returned to the ER with “severe chest and back pain.”

According to the statement, MS checked in and took a seat in the waiting room around 10 p.m. He had some scans done shortly before midnight and was sent back to the waiting room.

“By 3:30 am that same night, he would be deceased, not having had a meaningful interaction (with) a doctor or nurse until collapsing in the emergency waiting room,” the statement said.

The association called the situation “grossly unacceptable” and called on the province to conduct a full and complete investigation into the status of emergency care in the province.

“All of our sons, daughters, parents and siblings deserve prompt care, respect and dignity — not plastic waiting room seats and dying alone,” it said.

“People are dying. Enough is enough. It’s time to fix the issue.”

At the rally Saturday, Khan said in all the time he knew him, MS never complained, so when he heard MS was complaining in the ER, he said it must have been very severe.

“Our health-care system failed him,” he said. 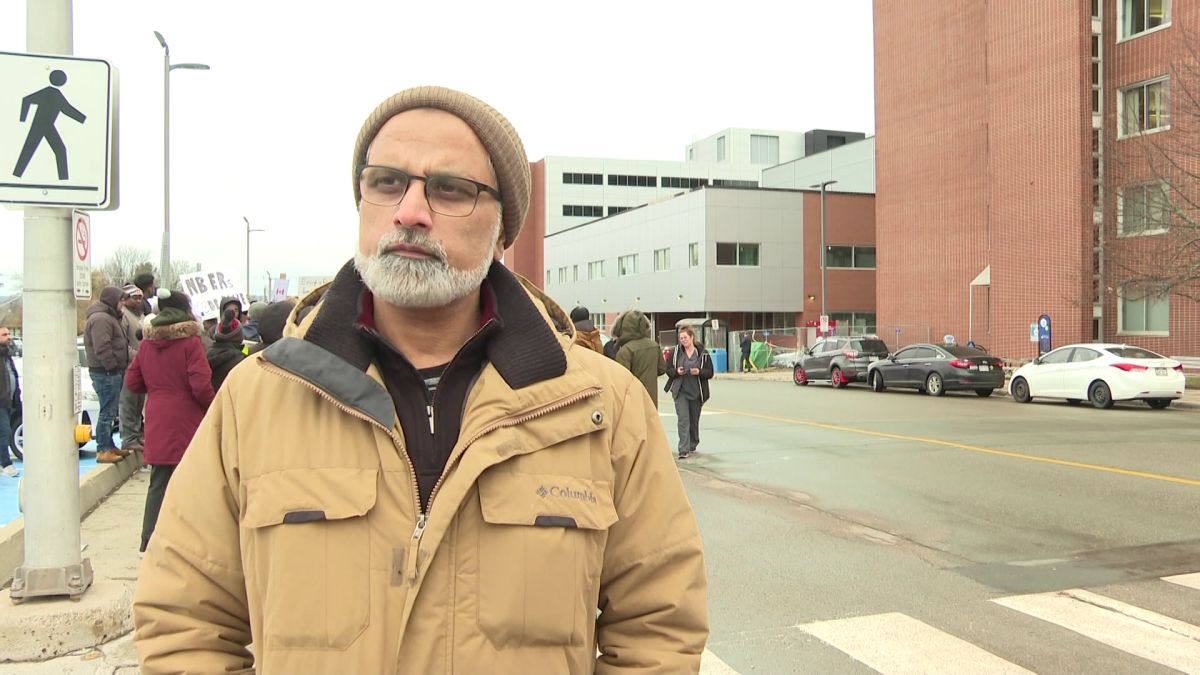 Abdal Khan says he’s known MS for 15 to 20 years, and described him as a sweet person and family man. Nathalie Sturgeon/Global News

One man at the rally, who did not want to give his name, said he had known MS for 20 years.

The man said the night MS died, he had his daughter with him, but he sent her home to study for an exam she had the next day.

The man said he received a call from MS’s daughter late that night, but he was in Alberta and couldn’t get home in time to help.

“He was alone. He had given her two numbers. One of them was mine. But I was away, I could not help,” he said, breaking into tears.

“We should all do something about this system. We can’t live like that. We have kids, we have futures … the government should step in and fix this broken system.

“We are here to support all doctors, nurses. We feel their pain … somebody has to do something about this. Enough is enough. Enough people dying.”

On Wednesday, Horizon Health Network confirmed a patient had died in the ER while the department was in “critical overcapacity.”

A statement from Dr. Serge Melanson, the clinical lead at Horizon Emergency Services, said the patient had arrived to the hospital with a “serious health concern,” was triaged as an emergency priority and placed in the main waiting room until a “suitable exam space was available.”

It said the patient’s condition “quickly deteriorated” while waiting to be assessed and efforts to resuscitate him were unsuccessful.

Melanson offered sympathies to the family and friends of the patient, while recognizing the efforts of the physicians and staff “under the challenging circumstances.”

New Brunswick’s health-care system, and specifically its emergency departments, have been under strain with staffing shortages over the past year.

Patients have spoken to Global News about struggling with ER closures, long waits, and being turned away because of capacity.

Last month, Vitalité and Horizon health networks said they had been hiring travel nurses from private temp agencies to fill gaps in staffing — especially in its emergency departments and critical care areas.

In August, Horizon Health launched a pilot project at its five major hospitals where a health-care professional would be stationed in the waiting room 24-hours a day.

The move was a direct result of the death of a patient at the Dr. Everett Chalmers Regional Hospital ER waiting area on July 12.

A patient also died at the Edmundston Regional Hospital ER, which falls under Vitalité Health Network, on July 24.

On Aug. 12, a patient who arrived at The Moncton Hospital’s ER also died while awaiting care.

— with files from Global News’ Nathalie Sturgeon and Rebecca Lau