Eugenie Bouchard was cheekily given playing credentials with a photo of her in a bikini on the frontEventually, it was replaced with a more appropriate iteration for the tournamentBouchard crashed out in the first round of the competition but remains alive in the doubles, reaching the quarterfinals, set to take place Thursday night

Eugenie Bouchard got more than she bargained for at the Odlum Brown VanOpen tournament in Vancouver this week.

Competing in her hometown event, Bouchard received her player credentials as normal, however this time the photo was a little different to normal.

Taking to Instagram, the 28-year-old revealed Wednesday that her pass had a photograph of her in a bikini. 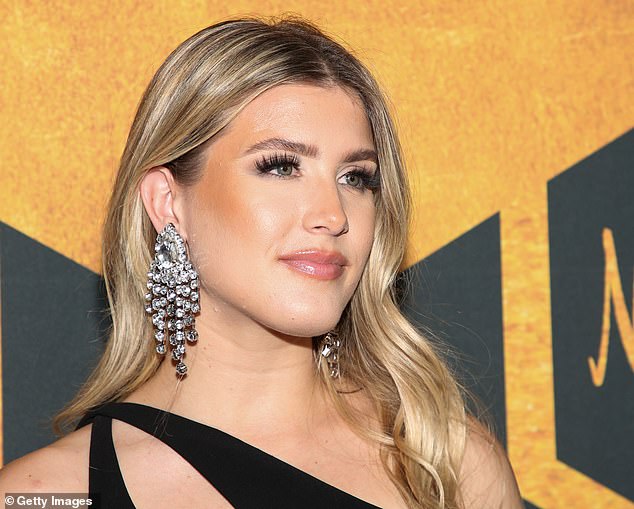 Eugenie Bouchard has become a powerful figure away from the tennis court, evidenced by her 2.3million Instagram followers 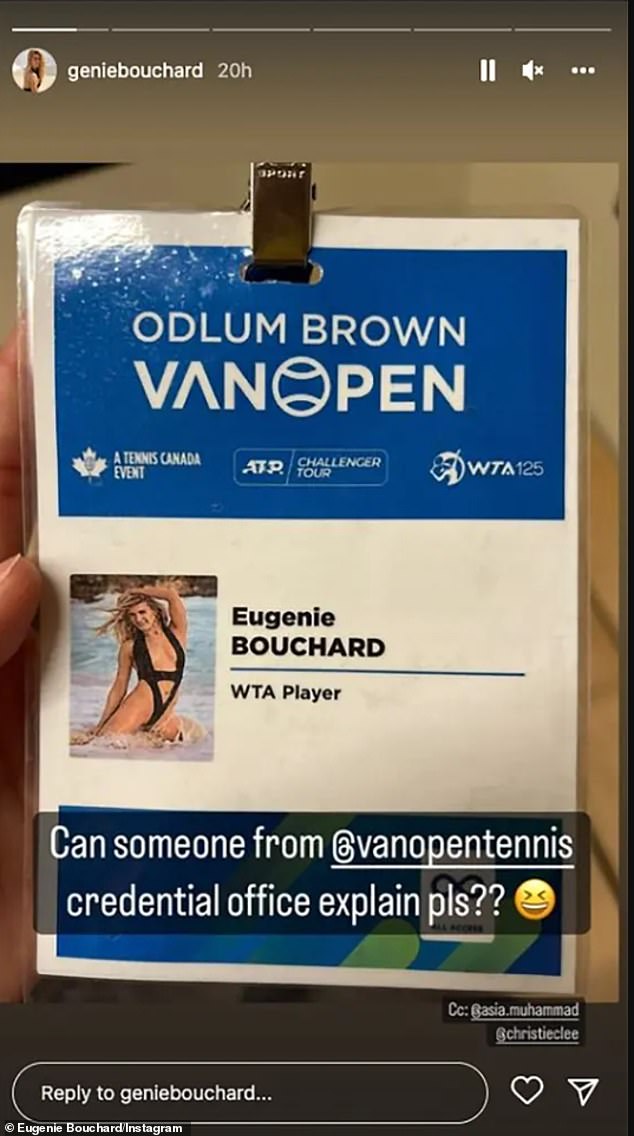 ‘Can someone from @vanopentennis credential office explain pls??’, Bouchard said via her Instagram story.

Staring right back at her was a snap from a Sports Illustrated cover shoot back in 2018.

Shortly after, the former Wimbledon finalist did in fact receive a new and, well, more suitable photo — which she shared to her 2.3million followers.

Bouchard lost in the first round of singles competition in Vancouver to Arianne Hartono, 6-2, 6-2. 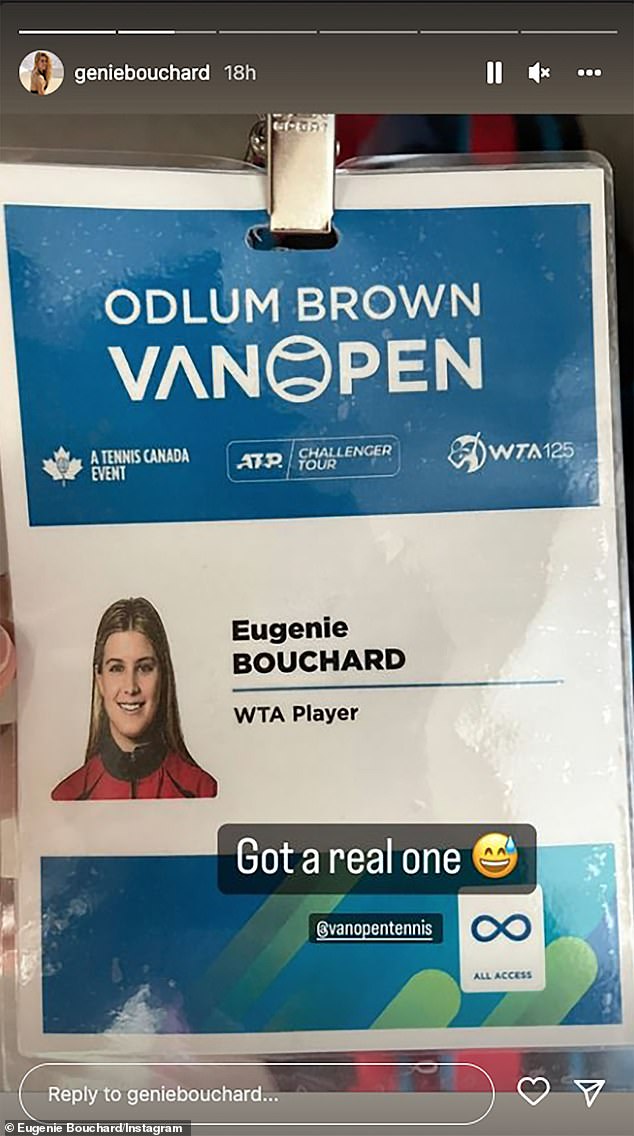 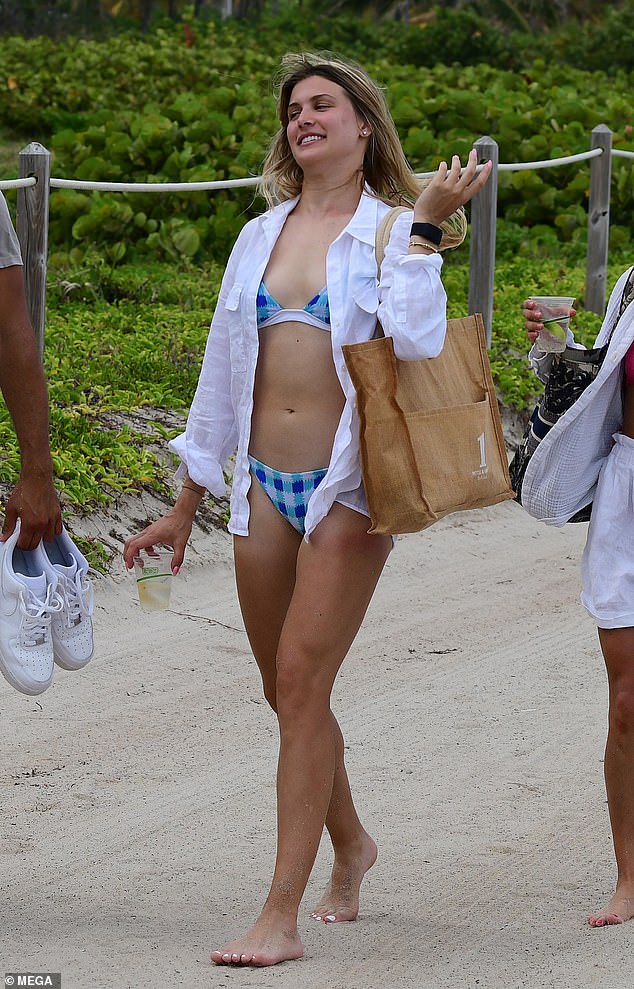 Bouchard is no stranger to a swimsuit, but she couldn’t have anticipated her credential photo 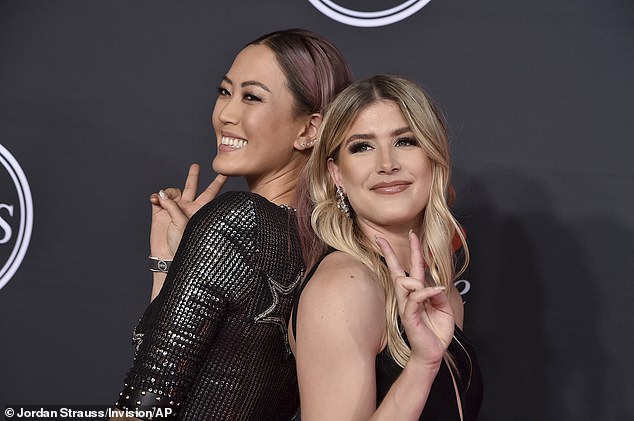 It was Bouchard’s first match back on the singles circuit in 17 months after surgery and subsequent rehabbing of her right shoulder.

Canada’s former world No. 5 will still need at least one of her passes as she remains in contention for the doubles crown, with partner Kayla Cross.

The pair face American Asia Muhammad and Japan’s Miyu Kato in the quarterfinals on Thursday.

Failing that, Bouchard will have other opportunities to impress on and off the court.

If one’s thing for sure, no one can question her credentials.

British passenger, 63, is found dead by his wife on board flight from UK to Cyprus

BREAKING NEWS: Arsenal star Emile Smith-Rowe ruled out for at least two months - and might not play again until Christmas - after surgery on groin injury

'We lived in fear': Alex Scott breaks down in tears recalling moment she thought her violent father killed her mother and reveals abusive parent banned her from showing affection

US diplomat who fled UK after crash that killed Harry Dunn is expected to appear via videolink in British court today: Anne Sacoolas will face motorbiker's family three years after tragedy

Warning issued to all drivers who wear glasses to avoid fines of up to £1,000

Cosmic mystery solved! Milky Way's two largest satellite galaxies are still able to form stars thanks to a protective SHIELD that stops their gas supplies from being siphoned off, Hubble data reveals

Video: Tyson Fury admits fight with Anthony Joshua is BACK ON, despite claiming he was pulling out, and calls for his 'coward' rival to sign a contract today with complicated broadcast deal finally settled


View more: Video: Tyson Fury admits fight with Anthony Joshua is BACK ON, despite claiming he was pulling out, and calls for his 'coward' rival to sign a contract today with complicated broadcast deal finally settled


View more: Israeli chess commentator is sacked and accused of sexism after saying the game is ‘maybe not for women’

Video: Trying to make it work? 'The Try Guys' host Ned Fulmer and his wife are spotted together - still wearing their wedding rings - just days after he was caught cheating with his producer and fired from show


View more: Video: Trying to make it work? 'The Try Guys' host Ned Fulmer and his wife are spotted together - still wearing their wedding rings - just days after he was caught cheating with his producer and fired from show

The president declared a 'major disaster' in Florida Will make federal funding available for at least nine affected counties Grants will help homeowners and business owners recover from the storm Hurricane Ian made landfall Wednesday and left 2.5 million without power

Car production last month was 34% higher than it was in August 2021Despite a fourth consecutive month of growth, outputs still 50% down on 2019Energy costs are now the biggest concern for the sector, with UK manufacturers spending a collective £300m in bills so far this yearMajority are passing on higher costs to consumers through increased prices, which in turn is stoking inflation, SMMT warns

Skeleton of the 23-foot creature was discovered in the Pierre Shale in WyomingIts name, Serpentisuchops, literally translates to 'snakey crocodile-face'It had a long crocodile-like snout and a long neck with 32 vertebrae

Imogen Brooke, 30, continues to deny that she forced a smaller man to have sexSaid she couldn't have tugged him over onto his back as 'I'm not Superwoman'She also denies giving alleged victim a love-bite while they were having sexClaims she gave it while they were kissing when her onion rings were in ovenShe told the court he was asleep when she got back and had to eat them herself


View more: Student weighing 24 stone denies forcing smaller man to have sex saying she is too 'lazy' to be on top for 15 minutes and did not give him a love-bite because 'I can't multi-task'

Martin Lewis calls out false Truss claim households will pay no more than £2,500

Paedophile, 22, who pretended to be woman online to lure children as young as 13 into sexual activity which he then recorded is jailed for 18 years

Get your letters to Santa ready! Hamleys reveals its top 10 toys for Christmas 2022 - from a £100 Playdoh Ice Cream Truck to a £37 Roller Disco Peppa

Video: Israeli chess commentator is sacked and accused of sexism after saying the game is 'maybe not for women'

Video: Megxit brought William and Charles closer together and Prince Andrew was 'protected by the Queen' - but WON'T be a key part of the streamlined monarchy because the King doesn't want to be 'affected by scandals past and present'

A slice of New Orleans in a corner of England: Inside a characterful colonial-style hotel in the heart of East Sussex

EXCLUSIVE: 'Why would you taser a dementia sufferer in a wheelchair?' Family condemn police over 'appalling' arrest of one-legged care home resident who died after being tasered, hit with a baton and pepper sprayed 'when he threatened staff with knife'

Surge in Airbnbs in Wales is forcing renters to move away, spend their savings or face homelessness as number of holiday lets rises by 53%, think tank warns