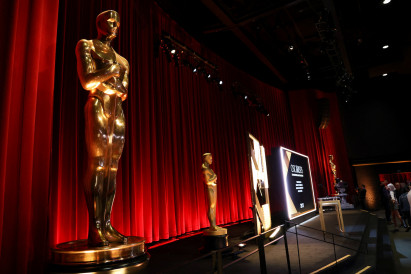 An Oscar statue is pictured ahead of the announcement of the 95th Academy Awards Nominations in Beverly Hills on Tuesdsay. (Photo: Reuters)

LOS ANGELES: The multiverse sci-fi smash “Everything Everywhere All At Once” on Tuesday topped the Oscar nominations with 11, as Hollywood formally kicked off the race to the Academy Awards on March 12.

The Irish dark comedy The Banshees of Inisherin and the World War I film All Quiet on the Western Front tied for second place with nine nominations, followed by the rock biopic Elvis with eight and Steven Spielberg’s quasi-memoir The Fabelmans with seven.

As expected, Academy voters also rewarded blockbusters such as Tom Cruise’s Top Gun: Maverick and Avatar: The Way of Water for helping to bring audiences back to movie theatres after the pandemic.

Both were nominated for best picture, Tinseltown’s most coveted prize, although another crowd-pleaser — Black Panther: Wakanda Forever — missed out.

The absurdist indie film Everything Everywhere All At Once portrays a Chinese-American immigrant family undergoing a tax audit, who are quickly drawn into an inter-dimensional battle to save the multiverse from a powerful villain.

It became a huge word-of-mouth hit and has grossed over $100 million worldwide.

Yeoh becomes just the second Asian woman ever nominated for lead actress in 95 years of Oscars history, and will compete with double Oscar-winner Blanchett for the prize.

But there was controversy elsewhere in the lead actress category, as no Black women were nominated, despite Viola Davis (The Woman King) and Danielle Deadwyler (Till) having been seen as frontrunners.

Instead the remaining slots went to Ana de Armas (Blonde), Michelle Williams (The Fabelmans) and Andrea Riseborough for tiny indie film To Leslie, which mounted an unusual, late celebrity-backed campaign for its star.

In the other individual categories, Brendan Fraser (The Whale), Colin Farrell (The Banshees of Inisherin) and Austin Butler (Elvis) are clear favourites for best actor.

The remaining nominations went to Paul Mescal in Aftersun and Bill Nighy in Living.

In the best supporting actress category, Angela Bassett became the first star in a Marvel superhero movie to ever earn an Oscar acting nomination with Black Panther: Wakanda Forever.

Spielberg made the best director shortlist, but no women were nominated in the category, sparking quick social media backlash.

Speaking before the nominations, Variety senior awards editor Clayton Davis told AFP this was one of the more unpredictable Oscars races, in part due to the recent massive growth in the number of international Academy voters.

Those members have been credited with surprises such as South Korea’s Parasite winning best picture in 2020.

This year they got behind All Quiet on the Western Front, which is distributed by Netflix. The World War I drama has built major momentum, scooping a massive 14 nods last week for Britain’s Baftas.

Television ratings for award shows including the Oscars have trended downwards, as Academy voters in recent years have veered toward honoring lesser-known indie hits like Nomadland and CODA.

Many in the industry were hoping for a healthy spread of nominations among 2022’s crowd-pleasing sequels, which were sorely needed as giants such as Cineworld, the world’s second biggest cinema chain, filed for bankruptcy protection.

“That’s the one that feels like it could actually win best picture,” said Davis, before the announcement.

“What better story the day after the Oscars air, than that the movie that saved movies was named the best movie? That’s a good story to tell.”

Rivian DELAYS Production AGAIN – Rivian R1T vs. Lordstown Endurance – $70B vs. $1.5B

Striking a balance At 'Paradise Lost', a group of creators present Bangkok from a new angle covering the past to present while imagining its future

Lebenthal on Rivian: &#39The emperor is wearing no garments&#39

Ashok Leyland steps up presence in Karnataka; to set up four dealerships

Maruti Suzuki eyes half a million CNG vehicles in FY23

In the current fiscal year itself, Maruti Suzuki expects CNG sales to expand nearly 50% to 235,000-240,000 units. The company has pending orders for an additional 115,000 units. The country’s largest carmaker Maruti Suzuki is looking at producing more than half a million CNG-powered vehicles in the upcoming financial ...

Welcome to SuperCarTube! The Super gasoline for motor automobile fans. Sign up for us in our day-to-day collection of videos from the significant Vehicle Reveals in Europe, United states and Canada, Frankfurt, Geneva, Paris, New York, Detroit, Los Angeles. Sneak into the ideal new vehicles and trucks. Еxplore the ...

KTM has announced its first Riders Academy training course in Asia with the aim of promoting off-road motorcycle riding to enhance driving skills and creating a new customer experience. The KTM Riders Academy will offer training courses on off-road techniques in one-day and also continuous programmes. Suitable for beginners ...

Mr Nattavuth expects car dealership to grow by 13%, thanks to growing demand for luxury cars, especially Mercedes-Benz brand, which has not been affected by domestic sluggish economy. Despite this year's economic challenges, TOA Venture Holding (TOAVH) expects its revenue to grow by 10% from 13.4 billion baht last ...

MG updates EV The 2022 ZS gets a pretty thorough refresh, although the pricing has yet to be revealed

MG will officially launch the updated ZS EV, which comes with increased performance and all-electric range of almost 400km, at the upcoming Bangkok International Motor Show later this month. While the official online introduction of the 2022 ZS EV was held on Friday, retail pricing for the D and ...


View more: MG updates EV The 2022 ZS gets a pretty thorough refresh, although the pricing has yet to be revealed

Ford’s not too long ago-announced business split into EV and non-EV units could lead to adjustments in the dealership encounter, according to Automotive News. The Blue Oval earlier this week announced plans to split its passenger-car business into two distinct units. Ford Model E will manage EVs, when Ford Blue ...

Volkswagen looks to more than double India sales in 2022

AFP The company had sold around 26,000 units in the local market last year. German carmaker Volkswagen is looking at more than doubling sales in the ongoing calendar year on back of demand for SUVs Taigun, Tiguan and soon-to-be launched midsize sedan Virtus.“If we look at the trend in the ...

How to buy the best windshield wiper blades for your car

Pent up demand for trucks at half a million, opportunity of $10 billion up for grabs

Watch Lucid’s CEO give the best EV battery primer yet

How to find the correct wiper blade size

How to save money with an electric scooter

This Rivian R1T Just Successfully Towed 2,700 Miles — Guess How Many Times It Stopped To Charge!

Inside Kim Kardashian’s US$3.8 million car collection, including a Skims wrapped Lamborghini, a fleet of five Maybachs and a Rolls-Royce – in grey to match her California mansion

Panasonic considering Oklahoma or Kansas for US battery plant

Fisker Ocean: 8 things I learnt getting up close with the innovative electric vehicle

VECV sales up 7 pc in February

Rivian has potential BUT there is one BIG PROBLEM #Shorts

'For Maruti, exports are increasing and will almost double this fiscal'

California hit a cumulative one million plug-in automobiles, as it aims for five million by 2030

After Riding in Cybertruck, Rivian, F150 Lightning Which One Am I Buying?