Reality television personality Matt Wright will be charged with a string of offences within hours over a helicopter crash that tragically killed one of his best mates earlier this year.

An arrest warrant was issued for The Outback Wrangler star on Monday, following an extensive police investigation into the crash that killed his co-star Chris ‘Willow’ Wilson, 34, in February.

Wilson died when a chopper he was travelling in crashed at Arnhem land. A second chopper carrying three men including Wright, immediately flew to the scene. It’s alleged that the trio interfered with evidence at the crash site in an attempt to perverse the course of justice.

Wright, 43, was spotted with his wife Kaia and their newborn daughter Dusty Faith passing through the security gates at Sydney Airport on Tuesday morning.

He is boarding a Qantas flight to Darwin after detectives issued the arrest warrant and gave him a 48-hour deadline to present himself to a Northern Territory police station.

He will be charged with at least six offences, including perverting the course of justice, destruction of evidence, fabricating evidence, interfering with witnesses, unlawful entry and making a false statement.

Wright has since strenuously denied any wrongdoing over what he described as a tragic accident. 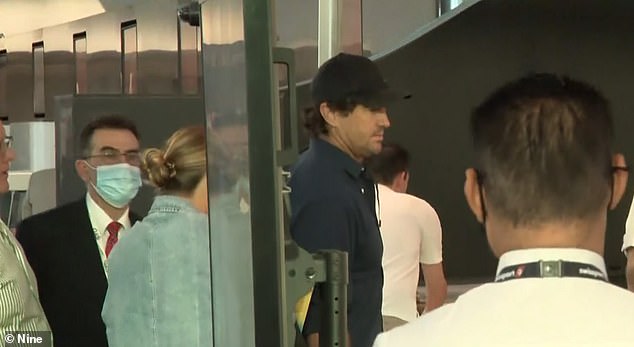 Matt Wright was spotted at Sydney Airport on Tuesday morning, a day after NT Police issued an arrest warrant


Wilson was collecting crocodile eggs in a remote area of west Arnhem Land when the helicopter he was attached to crashed on February 28.

The married father of two young sons had been connected to the Robinson R44 helicopter by a 30-metre line and harness before the chopper collided with a tree and crashed in the King River on the last day of the Top End’s wet season.

Pilot Sebastian Robinson was seriously injured in the crash and is still recovering from spinal injuries.

Police will allege Wright tampered with evidence at the crash site as fresh new claims emerged of events before and after the fatal crash.

It’s understood minutes before the crash that claimed his life, Wilson took a photo of the fuel gauge showing the chopper’s almost full tank, which he then shared in a WhatsApp group chat.

The photo contradicts Australian Transport Safety Bureau’s preliminary report, which revealed that investigators only drained about 250ml of blue fuel from the main tank’s bladder after the crash despite the two fuel bladder tanks still being intact. 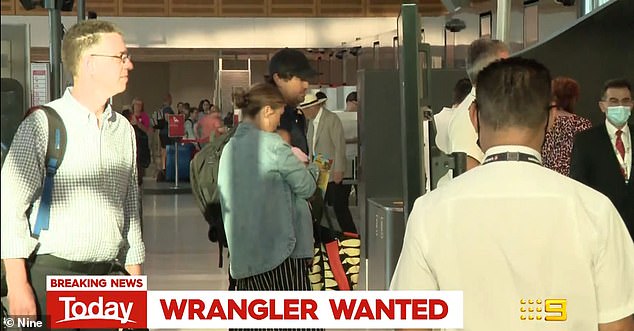 Matt Wright was accompanied by his wife Kaia, who was cradling their 10-day-old daughter 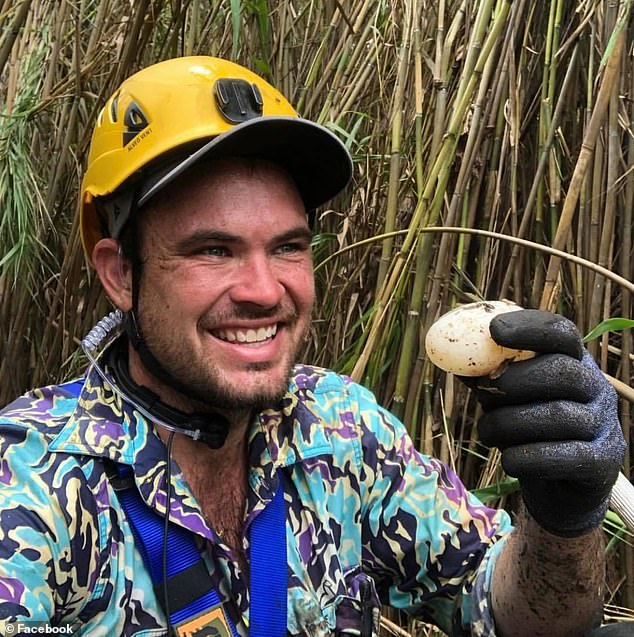 It’s understood the unlawful entry charges that will be laid relate to Wright entering Mr Robinson’s home and his helicopter hangar without consent.

Police will also allege Wright visited Mr Robinson in the hospital twice after the crash to try to get him to falsify records relating to the helicopter involved in the crash and to delete evidence from his mobile phone.

Sources told the publication Wright was not on the egg collection mission that ended tragically because he was not vaccinated against Covid-19 and not permitted to enter the exclusion zone.

However, it’s alleged he flew to the crash site immediately afterwards in a second helicopter with two other men where they interfered with evidence.

Police will also allege Wright regularly disconnected the hours meter in the VH-IDW and other helicopters used by his company and ordered other staff to do the same.

It’s understood photos provided to police by tourists who had travelled in the helicopter revealed that the chopper had been in use on days when information provided to CASA indicated it had not been flying.

It’s understood police have spent at least six months investigating Wright’s actions before and after the fatal crash. 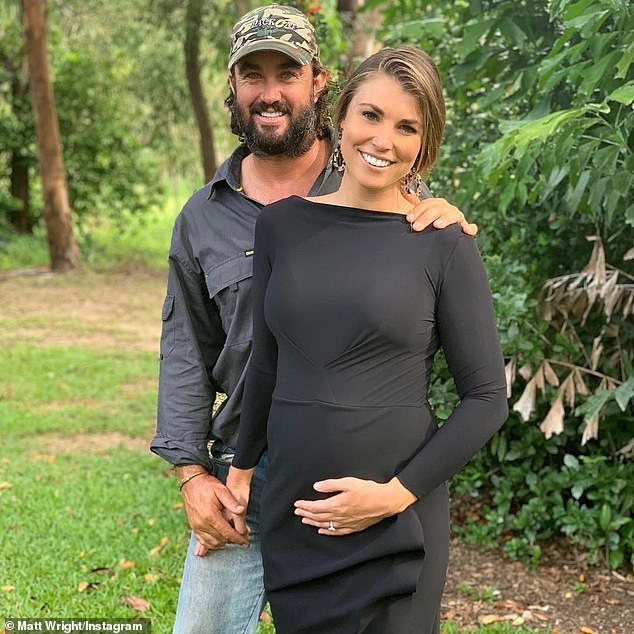 A spokesman for Wright told Daily Mail Australia on Monday the star strenuously denies any wrongdoing over what he described as a tragic accident.

‘What happened was a tragic accident that took the life of a close mate,’ the spokesman said.

‘His immediate concern following the accident was the condition of the two team members on board at the time.

‘The next priority was ensuring the other helicopters and team members at the site weren’t at risk and that the location was safe.

‘Matt will not be making any further statement.

The warrant comes days after Wright’s wife Kaia welcomed the birth of their second child, a daughter Dusty Faith on November 18.

The couple had recently relocated from the Northern Territory to the Gold Coast. 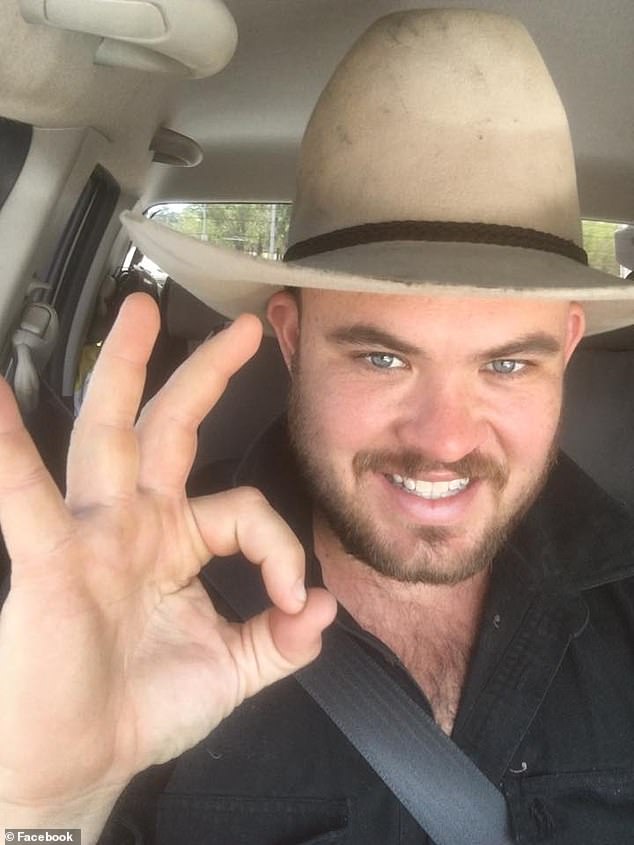 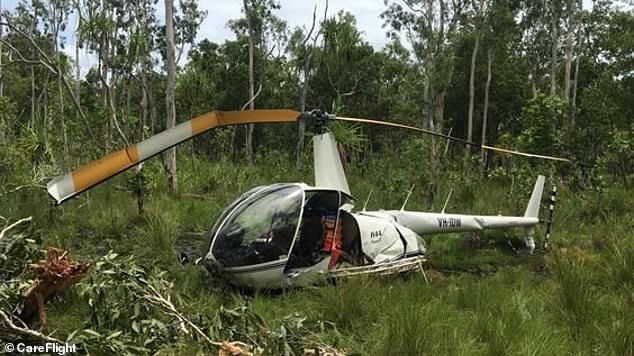 Wright recently made his first public comments about the fatal crash and how he still struggles to speak about the death of his close mate.

The crocodile wrangler claimed his friends were ‘out doing another job with another pilot’.

‘Unfortunately, the machine went down and Willow was killed in the process. So, it’s taken a horrible toll this year.’

A preliminary Australian Transport Safety Bureau analysis of the site earlier this year indicated the crash occurred when the helicopter’s main rotor blade struck and cut through a tree trunk multiple times before the aircraft hit the ground.

Initial assessments found that the engine had stopped prior to the helicopter colliding with the ground.

An examination found no defects likely to cause the engine to stop and there was no visible damage to the tail rotor blades and drive system. 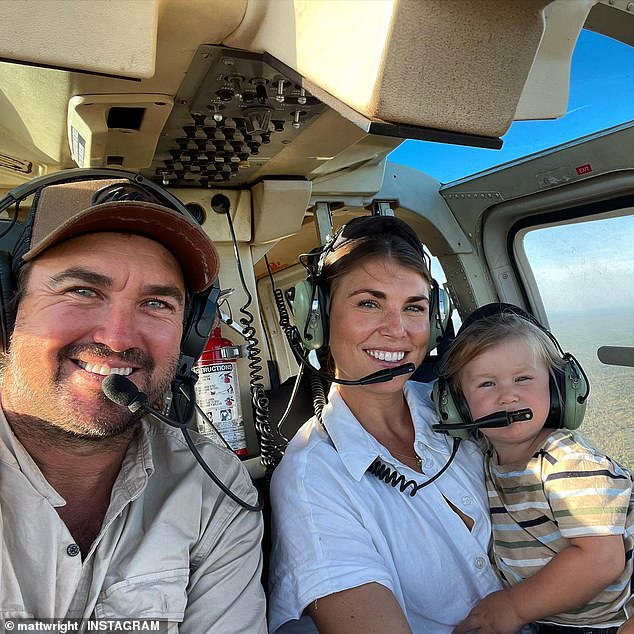 Matt Wright (left), pictured with wife Kaia and son Banjo has been ordered to present to a police station in Darwin by 9am Wednesday

An initial ATSB report said that its examinations ‘did not identify defects of the engine likely to result in engine stoppage’.

The ATSB’s final report, due to be published at the end of the year, has been delayed.

The results of the report are expected to be released in the first quarter of next year while NT Police investigations are ongoing.

Wright became a household name more than a decade ago as the star of National Geographic Channel series Outback Wrangler, which has since been aired in almost 100 countries.

His new series Wild Croc Territory aired on Channel Nine earlier this year and has since been screened on Netflix with a second series planned for 2023. 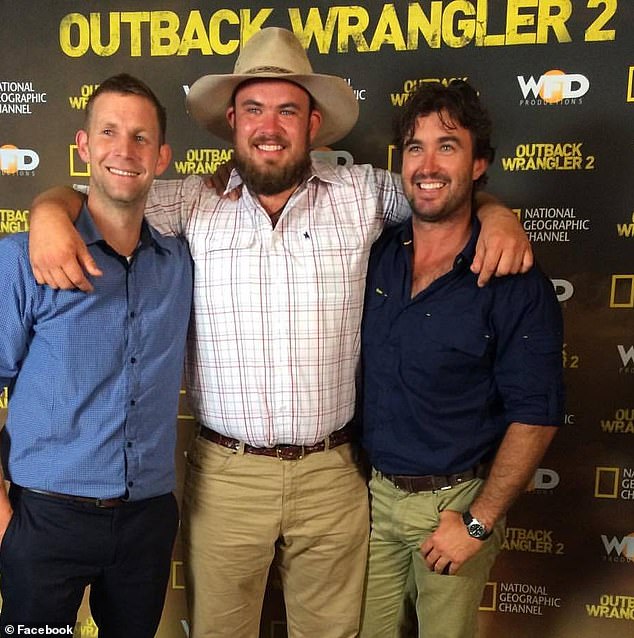 The Ford Bronco Stole a Significant Title From the Jeep Wrangler

Wheeling Hancock Pass via Wrangler, 4Runner & Bronco: On the Trail

4 Advantages the Jeep Wrangler Has Over the Ford Bronco

The Jeep Wrangler and Ford Bronco are two SUVs that are often compared to one another, and for good reason. They share a segment in the SUV market, and they are both known for their off-road capabilities. However, the Wrangler and Bronco also have several differences, and there are areas ...


View more: 4 Advantages the Jeep Wrangler Has Over the Ford Bronco

Does the Jeep Wrangler Have a Dodge Ram Engine?

You can order the Jeep Wrangler with a wide range of engines. This includes several engines Jeep shares with Dodge muscle cars and Ram pickup trucks. But Jeep also has unique engine options you can’t currently order in any Dodge vehicle or Ram truck–but you may be able to soon. ...


View more: Does the Jeep Wrangler Have a Dodge Ram Engine?

How Did the Jeep Wrangler Get Its Name?

The Jeep Wrangler is one of the most iconic SUVs–and nameplates–in history. But how did this 4WD SUV get its recognizable name? “Jeep Wrangler” is actually a combination of WWII slang, corporate branding, and an uncommon military acronym. What do the letters JEEP stand for? An automaker named Willys-Overland built ...


View more: How Did the Jeep Wrangler Get Its Name?

What Does a Transfer Case Do on a Truck or SUV?

When you head to a dealership and look at 4x4s, the salesperson will invariably tell you about the benefits of the transfer case. And for many of us, it’s a mind-numbing conversation. But if you need four-wheel drive, without a transfer case, you don’t get it. so, why is transfer ...


View more: What Does a Transfer Case Do on a Truck or SUV?

Hybrid powertrains can offer more power, burn less fuel, and even require fewer stops for maintenance than traditional internal combustion engines. This may seem like the perfect technology to combine with the beloved American SUV. But only one automaker offers a true SUV that is also a true hybrid: the ...

What Do the Letters JEEP Stand For?

The Jeep brand is synonymous with 4×4 convertible. Even in parts of the world where Jeep does not any SUVs, folks refer to any 4WD as a “Jeep.” But have you ever wondered where the word Jeep originally came from? The first Jeeps didn’t even carry that name: the Willys ...


View more: What Do the Letters JEEP Stand For?

Matt Wright left Darwin airport on Tuesday morning with supporters who scuffled with waiting media. (ABC News: Tiffany Parker) Celebrity crocodile wrangler Matt Wright has arrived at a police station in Darwin after being issued with an arrest warrant in relation to an investigation into a helicopter crash that killed a ...

Video: Outback Wrangler is charged over the chopper crash that killed his mate after presenting himself to cops amid a tense media scrum


View more: Video: Outback Wrangler is charged over the chopper crash that killed his mate after presenting himself to cops amid a tense media scrum

Video: Burly bodyguards of Outback Wrangler Matt Wright in wild scuffle with cameraman as he touches down in Darwin to hand himself in to police

Video: EXCLUSIVE: 'Outback Wrangler' Matt Wright is spotted on a plane out of Sydney with his wife and newborn as he flies to Darwin to face charges over fatal helicopter crash - as shock new details emerge

Consumer Reports Picks the Ford Bronco Over the Jeep Wrangler

5 Advantages the Ford Bronco Has Over the Jeep Wrangler

The Only Advantage Off-Roaders See in the Jeep Wrangler vs. the Ford Bronco

Everything You Need to Know About the Jurassic Park Jeep Wranglers

A Jeep Wrangler Made It Onto the List of Cheapest Cars To Insure. Barely.

When Did Jeep eBuild The First Wrangler?

Autotrader Says You’ll Have a Blast Driving These New SUVs

Here's How The Jeep Wrangler Could Bankrupt You

Motor Awards 2022: The Times and Sunday Times best cars of the year announced

The Jeep Wrangler 4xe Still Crushes as the Best-Selling PHEV

17000 km on my Mahindra Thar: My Indian substitute for Jeep Wrangler

Does the 2023 Jeep Wrangler 4xe Have Android Auto?