You already battled TSA lines that seemed a mile long, bumper-to-bumper traffic and weather delays just to get to Thanksgiving. After stuffing yourself and super-shopping, it’s time to go home. Pack your patience, the experts told FOX Weather when they shared their own go-to travel tips.

Don’t be in a rush. Almost 49 million Americans drove 50 miles or more this holiday weekend, so you won’t be alone.

“The sooner you can get on the road, if you can hit the road before 11 a.m. today, that’s going to be the best time,” Laura Ratliff, Editorial Director for TripSavvy.com told FOX Weather. “Otherwise, I would say hang out, have some turkey sandwiches, and then maybe after 8 p.m. is going to be the second-best time.”

Be your own “stress coach” if you do get stuck in traffic, regroup yourself. Clinical Psychologist Josh Klapow told FOX Weather that when we try to control what we can’t control, we get stressed. Talking yourself out of anxiety and frustration goes a long way to keeping calm and keeping the mood in the car up.

“Talking yourself through, saying things like, ‘I can’t control this. I’m going to be late, but it’s not my fault. I’m going to do okay,’” said Klapow, and say it over and over. “All those affirmations, believe it or not, change the way you think.”

Our physiologys change when we are stressed he said. Your body activates stress hormones, the flight or fight response. Those hormones prepare the body for intense physical exertion, like running, or trauma, like tissue damage. We actually can damage our bodies by continually prepping for an emergency that never comes. 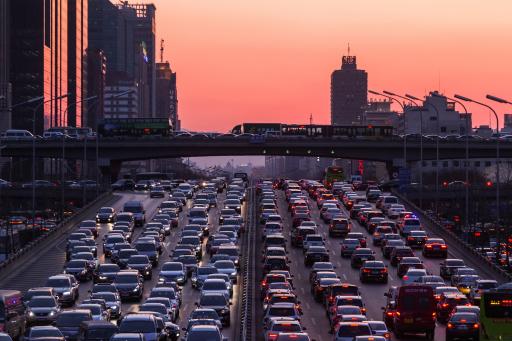 Nearly 49 million American drove 50 miles or over this past holiday weekend.

The stress will continue escalating until your body can stop or slow down those reactions. Repetitive and chronic perceived stressors can cause depression, anxiety even heart disease states a recent study. The prolonged stress responses can even lead to trouble remembering, learning new things, and decision-making, according to the CDC.

“Until we get a handle on that physiology, we can’t do anything else,” said Klapow. “That slow and deep breathing, that taking a step back, that calming ourselves down, gives us an opportunity to coach ourselves. And we have to coach ourselves through these difficult times.”

Whether you are on a road detour heading to the airport, stuck behind a crash or in a weather delay; Klapow says manage your “micro-environments.” That means preparing for the worst case scenario instead of being overly optimistic. If you prep, being early becomes your worst case scenario.

“So doing things like taking into account that there’s going to be a likelihood of delays and letting people know wherever you’re traveling that you actually may be late. Or if you’re going out shopping, taking into account traffic and padding your schedule,” Klapow said. “You can do a connecting flight that maybe it has an hour overlay rather than 30 minutes.” 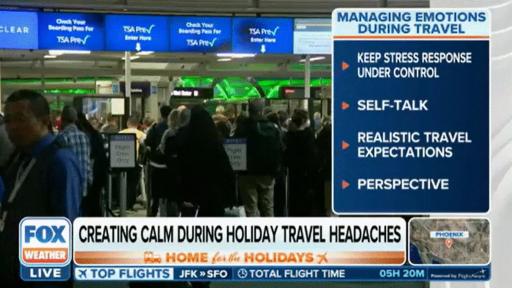 He continued, “I know those things sound like common sense, but if we go into the situation by doing that now, we’ve created some psychological padding that’s really important so that we have a greater chance of staying stress-free.”

“A lot of this comes down to mindset and also being realistic about your travel plans. You know, taking a child through the airport or for a long, car ride, you’ve got to take some breaks. You’ve got to give them a chance to make sure they get some food,” he said. “Those kinds of things, which are basic human needs, actually help us manage stress better.”

Keeping it calm and flying on

The Sunday after Thanksgiving was the single busiest airport day for both 2019 and 2021, according to NerdWallet.com. Ratliff suggests putting off travel by spending an extra day or two relaxing with friends or family.

It seems that many holiday travelers took that advice over Thanksgiving. So far the post-holiday travel, while very busy, has been smoother than over the summer. 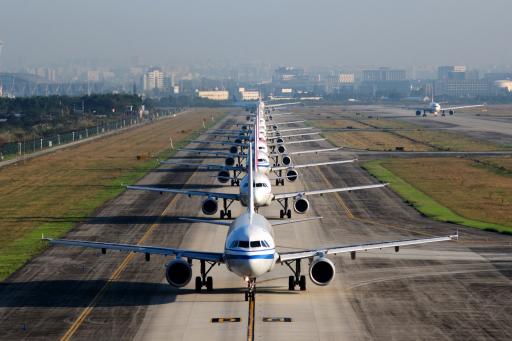 Sunday after Thanksgiving is normally one of the busiest days of the year.

“The silver lining this year is we’re already seeing way fewer canceled flights than we saw during the peak of summer travel,” Ratliff said. “So over this weekend, it’s looking like less than 1% of canceled flights. And a lot of that is people actually spacing out demand. So it means airlines are better staffed, they have more crew.”

If your flight is delayed or canceled, work with the airline. Ask for what you need.

What to do if your flight gets canceled

It’s frustrating when a flight has been canceled, but there are some things you are and aren’t entitled to when that happens.

She also suggests flying to a hub if your direct flight was canceled.

“Maybe make a connection somewhere along the way. You still might be able to get home on the same day with just a couple of hours delay,” Ratliff said. “So look into all your options. And a lot of the time what seems like a huge delay might not actually be.”

AAA forecasts even more Americans hitting the road and taking to the skies over the Christmas and New Year’s holidays. So, take a deep breath and keep these secrets in mind to keep it merry and ensure a Happy New Year.

Opulent and overflowing with opportunity