Alvechurch boss Ian Long was left feeling a mixture of pride and disappointment after the Southern League Premier side saw their FA Cup journey brought to an end by Forest Green. 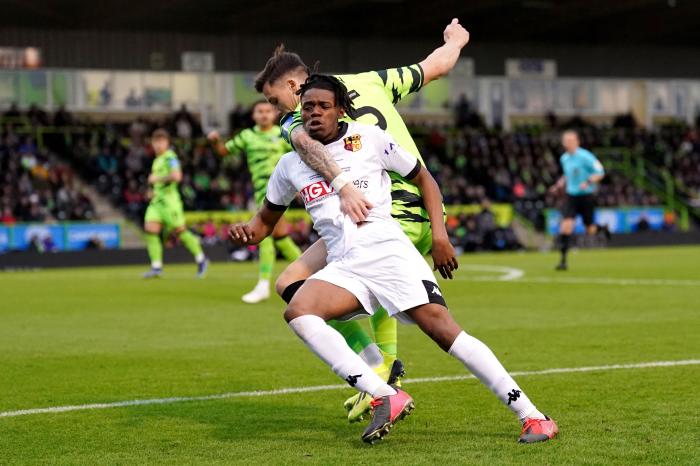 March won the penalty which Connor Wickham dispatched to put Forest Green ahead in the 24th minute and the 25-year-old striker then bundled home a 51st-minute winner, moments after Jed Abbey had drawn Alvechurch level with a brilliant free-kick.

The League Two strugglers were forced to play the final 18 minutes with a man less following Dom Bernard’s red card, but Alvechurch could not take advantage as their run in the competition came to a stop.

Long, whose side shocked Cheltenham in the previous round, said: “I’m proud of the run we have been on, but a little bit disappointed in the performance today.

“I thought Forest Green were the better side, we struggled at times and I was disappointed with the way we conceded the second goal shortly after getting back on level terms with a great free-kick from Jed.

“We switched off at the back stick and that’s happened a few times this season, when we have scored and conceded quite quickly after, and that’s a shame as we were just starting to get a foothold in the game at 1-1 and if we could have stayed at 1-1, who knows?

“But looking back we’ve beaten a League One side in the previous round (and) we certainly competed against Forest Green, but we’ve not hurt them enough with the possession we’ve had.”

Wickham gave Rovers the lead with his side’s first shot in anger, sending Dan Jezeph the wrong way after Aurio Neto-Teixeira was adjudged to have upended March in the box.

Alvechurch, four divisions and 92 places below their opponents, battled back after a low-key first half and drew level in the 49th mintue when Abbey curled in a sumptuous free-kick over the Rovers wall and beyond Luke McGee.

However, Rovers regained the lead just two minutes later, March scoring off his shoulder from a searching Harry Boyes cross, and Alvechurch could not recover for a second time.

Rovers are now in the third round for the first time since 2010 and manager Ian Burchnall knows which club he hopes to face.

He said “I’m a Leicester boy and on a personal level that’s my boyhood club, so Leicester would be the one, but one of the big teams is the day out you want.”

Burchnall admits he was relieved to see his side see out the closing stages after Bernard saw red, adding: “I’m very relieved. It was a stressful last 20 minutes.

“I thought it was a really good game, Alvechurch were excellent and they have some really good players.

“First half we controlled it really well, second half they get that brilliant free-kick goal and after that our response was good, we score, hit the bar and create some good moments.

“But we didn’t get that third, and then you’re always tense, and obviously the Dom Bernard sending off creates even more tension, but Baily (Cargill) and Ben (Stevenson) come in and we dealt with everything they threw at us and I thought we showed good character in the last 15 minutes.”

Usain Bolt fires business manager over Jamaica fraud case Jamaican sprinter Usain Bolt tells reporters he is baffled over how $12.7 million of his money has gone missing from a local private investment firm that authorities are investigating as part of a massive fraud SAN JUAN, Puerto Rico — ...

'That finish was a thing of BEAUTY!': Fans react to unlikely goalscorer Nathan Ake's 'incredible' threaded strike against Arsenal which sends Manchester City through to the FA Cup fifth round

Q&A: ‘The best of Jeremy Peña is about to come’: Former Astro Carlos Correa talks offseason, the Twins, and his future TV broadcast career