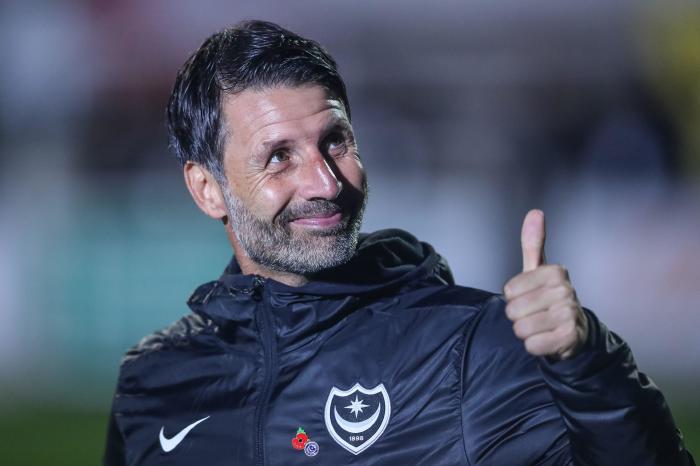 The 1939 and 2008 winners strode through after a brace of Colby Bishop penalties and Reeco Hackett-Fairchild’s fine finish, despite Darragh Burns and Mo Eisa’s strikes for the Dons.

Manager Cowley vividly remembers watching Nwankwo Kanu’s heroics at Wembley and other classic Fratton Park nights, such as AC Milan in the UEFA Cup, and wants to create his own legendary moments on the south coast.

“Since the moment I came here I have always remembered Portsmouth’s FA Cup runs and the big games they have played here with the intensity and the atmosphere in this stadium,” said Cowley.

“They transcended through my television set in the early 2000s so a big club coming here in the third round would be pretty special. It is the greatest competition in the world and cup games are really different.”

Pompey dominated the opening 20 minutes but fell behind when Burns got in behind to clip over Josh Griffiths after a quick counter-attack before Hackett-Fairchild levelled two minutes later.

Bishop thought he had made the game safe with a penalty in each half, to take his season tally to 13, but Eisa set up a nervy last half an hour with a simple finish.

Despite the worrying finale, Cowley was happy with his threadbare squad’s performance, saying: “We had a really good place in the game after we scored three goals then conceded a soft one and that changed the momentum of the game.

“We only have 15 fit senior outfield players so we can’t underestimate our performance today. For the players to navigate the game and still be in the competition is pleasing.

“We played really well until we scored the third goal but, after then, we didn’t quite get it right and kind of played for the end of the game. We are disappointed with the last half an hour but we showed spirit.”

Liam Manning was disappointed about how MK Dons conceded two spot-kicks, after fouls from Josh McEachran and Bradley Johnson, which gave Pompey an easy foothold in the match.

The MK Dons boss said: “It comes down to discipline and quality is what costs you ultimately but there is so many good things for us to take out of the game.

“You can’t give away cheap goals like penalties. That is disappointing obviously and isn’t something we want to repeatedly do.

“The collective performance was great. We shifted the momentum by engaging higher up and looked dangerous on the counter-attack.

“We were disappointed with the manner of the goals we conceded but around them there were many good aspects.

“We have to fight and scrap and, irrespective of the scoreline, we have to believe we can get something from games.”

The Memphis Police Department on Friday released body camera video showing black motorist Tyre Nichols being brutally beaten, pepper sprayed and tasered by multiple cops during a traffic stop earlier this month. The appalling beatdown that led to Nichols’ death in the hospital days later only lasted about three minutes ...

Bournemouth call off £20.3m move for Villareal's winger Nicolas Jackson over hamstring injury concerns... but the Cherries confirm the capture of forward Antoine Semenyo for £10.5m from Bristol City

Pep Guardiola claims Man City's FA Cup win over Arsenal will have no bearing on the title race, noting that he expects Mikel Arteta's side to 'do something differently' after being eliminated