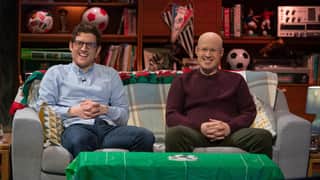 Fantasy Football League was a mainstay of football fans’ viewing habits in the 90s, arguably making household names out of comedians Frank Skinner and David Baddiel.

Even before , they were hosts of the sporting comedy programme inspired by the Fantasy Football phenomenon which started in the early 1990s.

Three series were broadcast between 1994 and 1996, before the show moved to ITV for live specials on alternate nights throughout the 1998 World Cup and Euro 2004 competitions.

Now, the show is back, revitalised for a new audience and with a new duo of hosts in tow.

Here is everything you need to know about it.

What is Fantasy Football League?

Unfortunately, Baddiel and Skinner won’t be returning to the mock-up flat set, but new hosts Matt Lucas and Elis James are sure to be welcome replacements with their weekly survey of the beautiful game, including clips and anecdotes from the week’s headlines.

A pair of famous faces will join the duo each week on Sky Max to share their fantasy teams and commiserate over missed opportunities on the pitch.

The original show was initially reliant on an actual fantasy football league comprised of teams chosen by regular celebrity guests. Every week, one or more of the celebrities would come on to the show to discuss football and their fantasy lineups.

The rebooted show looks to continue this tradition, and luckily, the full list of celebrity guest ‘managers’ has already been shared by Sky. 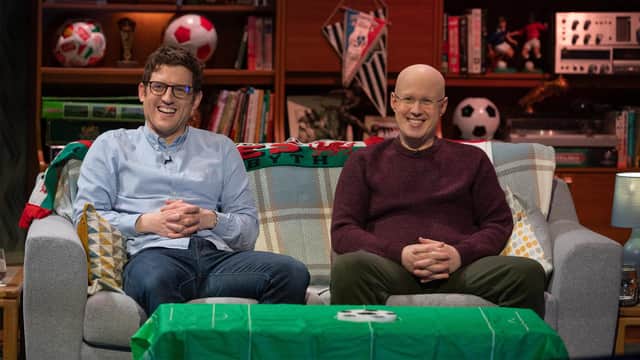 However, as the original show progressed, the fantasy league element was pushed to the sidelines in favour of comedy and clips, and was finally dropped entirely.

But 2022’s version looks set to be a balance between the two, and the show will aim to appease both the new and cult following by discussing topics from the world of football today.

It will also be revamping much-loved segments like “Phoenix from the Flames”, which saw the hosts recreate a famous moment from footballing history, usually with a retired pro or other famous footballing figure.

“I loved watching Fantasy Football League,” said Lucas, “and am chuffed to bits to be a part of this new incarnation. I now make a living eating cake and watching football. I must be the luckiest man in the world.!”

“To be presenting a show I used to tape off the telly is a dream come true. The ambition is to make a show that’s as loved as the original, and fill it with references to Swansea City without making it unwatchable.”

Who will be the guests?

Across the 16-episode series, Lucas and James will be joined by a variety of celebrities in the digital dugout, including Sir Mo Farah and rapper AJ Tracey.

Luckily, the full list of celebrity guest ‘managers’ has already been shared by Sky.

Confirmed to appear on the show are:

Can I play along?

Such is the magic of modern technology, viewers at home will be able to play along with the Fantasy Football antics, by competing in the show’s own FPL league.

To join in and compete with the celebrity guest managers each week, sign up to the league using code HFYXTQ via the official Fantasy Premier League app – more information can be found on the fantasy football website.

When can I watch it?

How to Fix ‘The Number You Have Dialed Has Calling Restrictions’

How to appeal a parking ticket explained

THE last thing you want to see when your return to your car is a parking ticket. But if you do find one propped up on your windscreen don't panic – there are ways you can appeal the fine. Here's everything you need to know when appealing a parking ...


View more: How to appeal a parking ticket explained

How to get Barboach Slime in Pokémon Scarlet and Violet

How Does Your Snap Score Work (and How to Increase It)