A father has told of his heartache after his son passed away just six days after being born following a catalogue of blunders by NHS medics.

Darren Smith, 43, shared that his son Isaac suffered catastrophic brain damage while being starved of oxygen during birth at an unidentified North London-based hospital.

The newborn was subsequently rushed to St Thomas’s Hospital.

But his life support was turned off six days later after medics concluded he would have been unable to survive.

An external inquiry into the incident subsequently identified more than 30 errors during Isaac’s birth at the unnamed hospital.

It concluded that he would have survived with no brain damage if the correct procedures were followed, according to Mr Smith.

A decade on from his heartbreak, the finance manager from North London is now set to run the Royal Parks Half Marathon in a tiger costume on Sunday in Isaac’s memory in a bid to raise £50,000 for St Thomas’s.

He said the team ‘supported the entire family for over seven years along the toughest journey imaginable’, and helped deliver his daughter eight years ago. 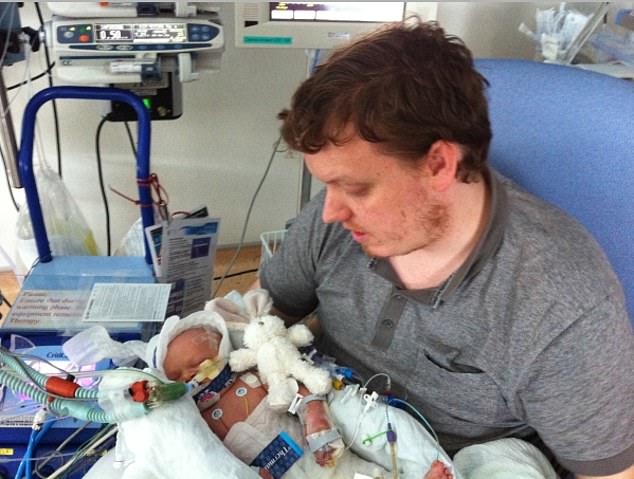 Darren Smith, 43 (pictured with Isaac) shared that his son Isaac suffered catastrophic brain damage while being starved of oxygen during birth at an unidentified North-London-based hospital a decade ago 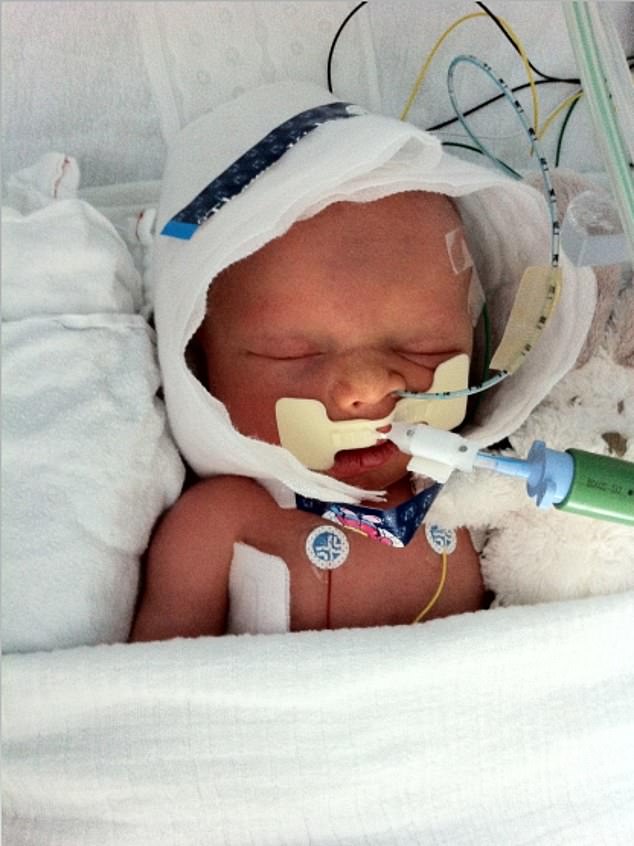 The newborn (pictured) was subsequently rushed to St Thomas’s Hospital in London. But his life support was turned off six days later after medics concluded he would have been unable to survive 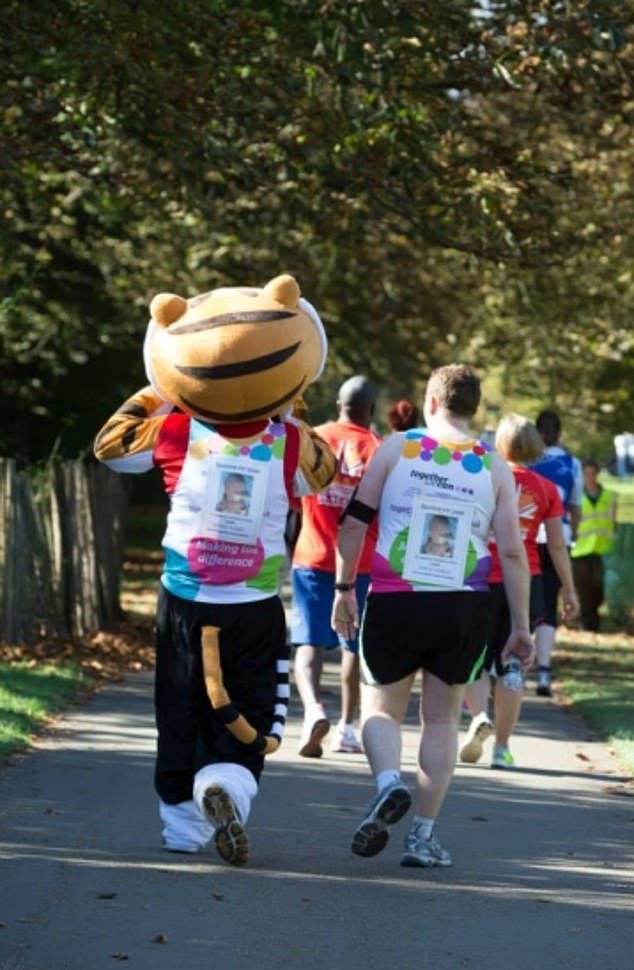 A decade on, the finance manager from North London is now set to run the Royal Parks Half Marathon in a tiger costume (pictured) on Sunday in Isaac’s memory in a bid to raise £50,000 for St Thomas’s Hospital

Mr Smith and his wife went to hospital for their final scan on July 27 2012, when she was nearly 37 weeks pregnant.

But when leaving the scan room, his wife felt a ‘gush’ that she believed was her waters breaking – but it was actually a placental eruption.

The phenomenon, which affects up to one per cent of pregnancies, occurs when the placenta – the organ which passes oxygen and nutrient to an unborn baby – starts to come away from the inside of the uterus before the baby is born.

As the couple were still at the hospital, they went straight to the maternity A&E.

Despite being in the ‘perfect place for something like that to happen’, the hospital decided to ‘just monitor the situation’ for two-and-a-half hours, despite Mrs Smith bleeding ‘a lot’, Mr Smith said.

But she was subsequently rushed for an emergency C-section.

Isaac was stillborn and then resuscitated – but had suffered catastrophic brain damage due to a lack of oxygen following the placenta abruption.

Isaac was transferred to St Thomas’ in London, where he underwent brain cooling – a treatment to stop further brain damage taking place.

But he subsequently passed away six days later when his life support machine was switched off.

Mr Smith, who now has a daugher, said he spent the next few years ‘living in shock’ and began to understand how taboo the subject of baby loss is.

He said: ‘Friends we’d had for years struggled to talk to us because they didn’t know what to say and were scared to say something that may upset us.

‘The reality was that we wanted to talk about Isaac — he was a real person who spent time on this earth and the last thing we’d ever want is for him to be forgotten’.

In the weeks following Isaac’s death, Mr Smith and his wife were informed that ‘something wasn’t adding up in the timeline around his birth’.

St Thomas’ subsequently launched an initial investigation into the hospital where Isaac was born. Mr and Mrs Smith then requested an external inquiry.

The external probe found more than 30 errors during Isaac’s birth and concluded that he would have survived with no brain damage if the correct procedures had been followed after medics discovered the placenta abruption.

Mr Smith was later called upon as an expert witness to the Health and Social Care Select Committee to tell Isaac’s story as part of a review into the safety of maternity services.

Reflecting on how the last decade has affected his mental health, Mr Smith said: ‘I never really suffered with mental health issues until a year after Isaac passed away.

‘One day in work I was suddenly unable to breathe and realised I was having my first ever panic attack.

‘I think that’s why I continue to run so much.

‘In the early days, after Isaac passed away, I used to go running as a way of getting out the house and talking to Isaac.

‘It gave me time to get things straight in my own head and think about my son.’

He ran the London Marathon last weekend and is set to run the Royal Parks Half Marathon in London this Sunday. The course goes through Hyde Park, Green Park, St James’s Park and Kensington Gardens.

He is raising money for The Evelina Children’s Hospital — the department within St Thomas’ that looked after Isaac after he was born.

To date, Mr Smith and his family have raised over £48,000 for the hospital through a JustGiving page. But he hopes his race will boost the amount over £50,000.

‘This would supply the Evelina Children’s Hospital with two sets of life saving equipment, and it would mean the world to me to give back to a place that has helped me so much over the years.’

Mr Smith added: ‘I’m rather overweight these days, so with no PB [personal best] in sight, I thought I’d compete in a giant tiger suit to see if I can convince people to donate and get us to that elusive £50,000 mark.

‘I’ve been told many times that I’m silly to put my body through these challenges when I’m not the most physically fit, but I draw my strength from my son, my family, and the desire to help other families who have also lost a child.’

Reflecting on his thoughts on both race-day and beyond, Darren says: ‘I’m looking forward to seeing my family and friends on the sidelines alongside some of the staff from the Evelina Children’s Hospital — I’m hoping to get my daughter over the barriers to join me for the last 50-metres of so which will be very emotional I’m sure.

‘I have no plans to stop raising money either.

‘We just want to help the Evelina team as much as we can.

‘They have done so much for us as a family, and so many other families around the country, and we just want to give back and show them how truly grateful we really are.’