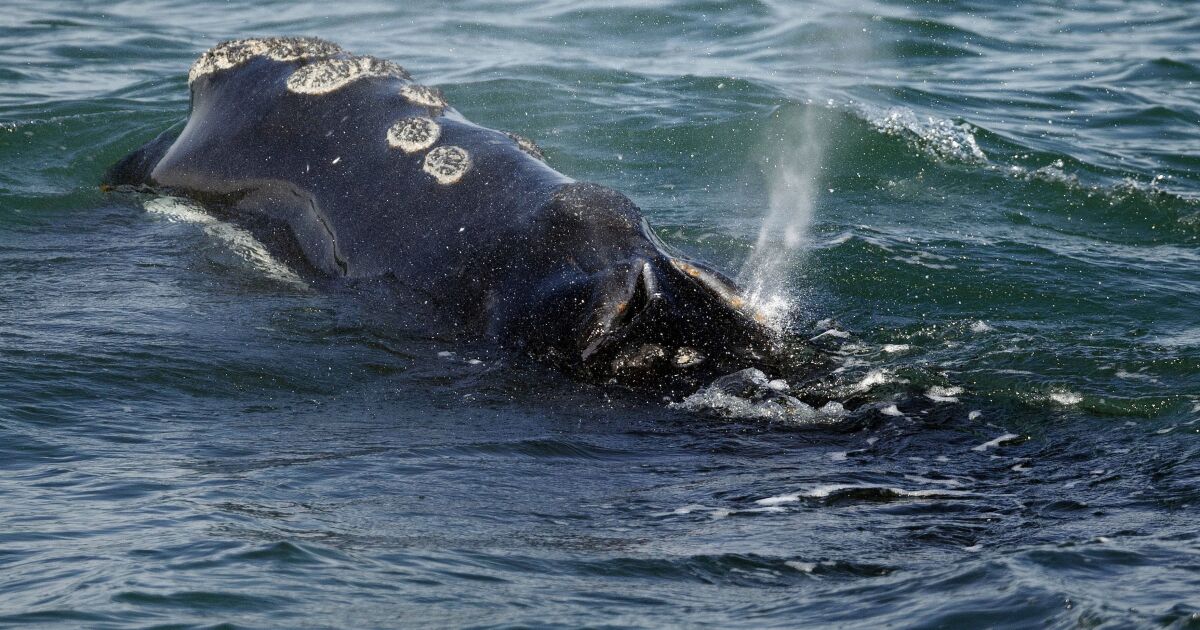 The U.S. government has denied a request from a group of environmental organizations to immediately apply proposed ship-speed restrictions in an effort to save a vanishing species of whale.

The National Oceanic and Atmospheric Administration is considering new rules designed to stop large ships from colliding with North Atlantic right whales. The whales number less than 340, and they are vulnerable to ship strikes and entanglement in fishing gear.

The proposed rules would expand “slow zones” off the East Coast and require more vessels to comply with those rules. The environmental groups had asked NOAA to immediately implement pieces of the proposed rule that would aid the whales this winter and spring, when the whales travel from their calving grounds off the Southern states to feeding grounds off New England and Canada.

The agency informed the conservation groups Friday that it was denying the request on the basis that it is “focused on implementing long-term, substantive vessel strike risk reduction measures,” according to documents obtained by the Associated Press.

NOAA also told the groups it was concerned the time needed to develop emergency regulations would prevent their quick implementation.

“We know that the risk is there,” Asmutis-Silvia said. “You can’t recover the population unless you have kids, and we want to make sure the kids survive.”

The population of right whales has been declining in recent years, and that has raised alarms among marine biologists, animal welfare activists and government regulators. Some scientists have said the warming of the ocean has caused the whales to stray outside of existing protected areas as they search for food.

Conservation groups and commercial fishermen have also been at odds over the correct way to protect the whales. Conservationists want new restrictions on lobster fishing to prevent the whales from getting entangled in gear, but those restrictions are currently on hold.


View more: ‘She Can’t Talk Like a Human Being’: The Five Savages ‘Embarrassing’ Karine Jean-Pierre

KANSAS CITY, MISSOURI – JANUARY 30: Quarterback Patrick Mahomes #15 of the Kansas City Chiefs kisses his finance Brittany Matthews before the start of the AFC Championship Game against the Cincinnati Bengals at Arrowhead Stadium on January 30, 2022 in Kansas City, Missouri. (Photo by Jamie Squire/Getty Images) On ...

1/27 There has been a lot of smack talk going back and forth between the Cincinnati Bengals and the Kansas City Chiefs as these two powerhouse teams prepare for this Sunday’s AFC Championship Game. Apparently, even the mayor of the city of Cincinnati is joining in on the fun. ...

Tom Brady and David Beckham were throwing a pizza party. The close friends met at Miami Slice for a pizza party with their kids while the NFL quarterback deals with what the next steps are in his career after a first-round playoff exit to the Dallas Cowboys, along with a ...

Talk about a cut of good fortune. Stephen Munoz Espinoza of Delray Beach, Florida, could have shown frustration after a stranger jumped in front of him in a line to a lottery ticket machine while at a Publix grocery store. Instead, his restraint won him a once-in-a-lifetime ticket. “It was ...

NEW YORK (AP) — Amazon is axing free grocery delivery for Prime members on orders less than $150. Customers who get their groceries delivered from Amazon Fresh — and pay less than $150 — will be charged between $3.95 and $9.95, depending on the order size, the company said in ...

2 facing charges after woman robbed, beaten and left on I-79

'Beyond anything I've ever seen': Mayor Strickland speaks about Tyre Nichols investigation

Applications for the Snapdragon Insider Access Program are live

‘Thank God we didn’t have the 3’: Gail Goodrich reveals Hall of Famer who would’ve thrived with 3-pointer

This Gym Machine Can Be the Key to Advanced Chest Gains

Pasadena, Deer Park joint recovery center helping residents get back on their feet after tornado

A Series of Disturbances Will Lead to Rain, Maybe Wintry Weather, Next Week

How Much Money Has Anna Delvey Made Since Getting Out Of Jail?