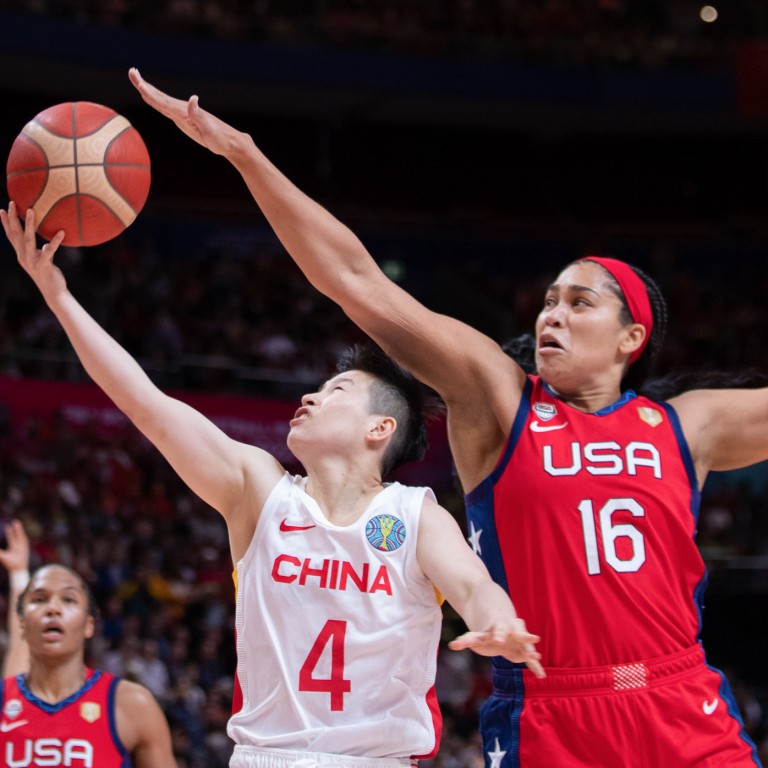 China are playing the United States in the final of the FIBA Women’s Basketball World Cup in Sydney on Saturday, bidding to overturn their defeat by the Americans earlier in the tournament.

The Americans were closing in on victory, leading the gold medal match 68-47 after the third quarter.

In the semi-finals, China had knocked out hosts Australia in a dramatic match decided in the final seconds – guaranteeing their first medal in the competition since 1994.

The US had reached their sixth gold medal match in seven editions by beating Canada 83-43.

The Chinese were the team who pushed the US the closest earlier in the tournament, losing by only 14 points.

Have England and Senegal ever played each other?

Nico Hulkenberg: Getting used to Haas car will take time

Kylian Mbappe 'would struggle against Kyle Walker's physicality' if England were to meet France in the World Cup quarter-finals, claims Theo Walcott - but the ex-Arsenal winger warns the PSG star is 'on a different level at the moment'

A 's*** mood' and SILENCE in the dressing room, players packing up their own boots as some consider quitting... and WAGs waiting for them at 2.45am: Inside Germany's miserable World Cup ending

Jude Bellingham is 'valued at £129MILLION by Borussia Dortmund' with Liverpool, Chelsea and Real Madrid all circling - which would make England's World Cup star the third most expensive player EVER... and his club expect it to rise after the tournament!

'We have to pay him a month of vacation in Split!': Romelu Lukaku is mocked by former Barcelona and Croatia star Ivan Rakitic, who jokes his country should gift striker a holiday for his misses which sent Belgium out of the World Cup

‘The devil himself’: Ghana target World Cup revenge against Luis Suarez and Uruguay

WORLD CUP LIVE: Cristiano Ronaldo may NOT feature for Portugal as they bid to top group H against South Korea, as favourites Brazil face Cameroon

Formula 1 has confirmed that the 2023 Chinese Grand Prix will not take place due to the country’s zero-covid policy. The race in Shanghai has not taken place since 2019 due to Covid-19 and the country’s tough stance on lockdowns, which is the primary reason for the current protests ...

Nouran Gohar secured her place in the semi-finals of the Hong Kong Squash Open on Friday with a clinical, straight sets win over Japan’s Satomi Watanabe, although it was not all smooth sailing for the world No 1. Gohar, the 2016 Hong Kong Open champion, set a cracking pace ...

Ghana vs Uruguay LIVE: The Black Stars take on Luis Suarez and Co with a last-16 spot at the World Cup up for grabs... and the chance to get revenge for THAT incident in 2010


View more: Ghana vs Uruguay LIVE: The Black Stars take on Luis Suarez and Co with a last-16 spot at the World Cup up for grabs... and the chance to get revenge for THAT incident in 2010

South Korea vs Portugal LIVE: Son Heung-min and Co must win to stand any chance of making the World Cup last-16 against opponents who are already through... but will Cristiano Ronaldo be involved?


View more: South Korea vs Portugal LIVE: Son Heung-min and Co must win to stand any chance of making the World Cup last-16 against opponents who are already through... but will Cristiano Ronaldo be involved?

Sporting Life: What, you’re not a Japan fan yet?

In the summer of 1975, Junko Tabei, barely 1.47m tall and weighing little more than a full backpack, was part of an all-woman team to Everest. One night at Camp 2, an avalanche hit them and she was buried in the snow and suffocating till the sherpas pulled her out. ...


View more: Sporting Life: What, you’re not a Japan fan yet?

Pakistan navigated their way to the tea break 108 without loss (Anjum Naveed/AP) (AP) Pakistan reached 108 without loss at tea on the second day of the first Test as they responded serenely to England’s swashbuckling 657 all out in Rawalpindi. Openers Imam-ul-Haq and Abdullah Shafique both brought up ...

Auf Wiedersehen! Germany's World Cup failures leave their Qatar desert base for the last time, hours after being dumped out of the tournament, as stars reveal the 's***' mood in their dejected camp

Germany crashed out of the World Cup on goal difference on Thursday nightThe players have revealed the mood in the squad after the final whistle was 's***'They are now heading back to Europe after their early elimination in QatarThe squad left their training bus on their team bus for the final time on FridayClick here to follow Sportsmail's live blog on the World Cup in Qatar Click here for the latest World Cup 2022 news, fixtures, live action and results


View more: Auf Wiedersehen! Germany's World Cup failures leave their Qatar desert base for the last time, hours after being dumped out of the tournament, as stars reveal the 's***' mood in their dejected camp

REVEALED: Japan's 18 per cent possession in their shock 2-1 win over Spain is the LOWEST a winning team has recorded in a World Cup match since 1966... after they also beat Germany with just 27 per cent of the ball!

'We were EMBARRASSED': Spanish papers blast Luis Enrique's side for their 'DISMAL' defeat against Japan - which had them going out of the World Cup for three crazy minutes - as they thank Germany for fighting back against Costa Rica to send them through

World Cup: German FA, with an eye on Euro 2024, to review Qatar flop

Graham Arnold insists facing Lionel Messi is 'a dream come true' and tells Socceroos to seize chance to make history against Argentina: 'Let's do something special'

World Cup: Meet M. Ganesan, the man from Singapore who is a ‘brother’ to match officials in Qatar

'That is one of the best tackles you will EVER see': Fans praise Croatia centre-back Josko Gvardiol's incredible last-ditch challenge on Romelu Lukaku that saw him slide the ball away from the striker to seal his country's path to the World Cup's last-16

'It's sheer incompetence': There is no proof that VAR should have awarded Japan's controversial winner that ended up sending Germany home, Sportsmail's Mike Keegan tells WORLD CUP CONFIDENTIAL

Football: Brazil legend Pele thanks supporters, says he was in hospital for ‘monthly visit’

'It is a DISGRACE!': Germany wakes up to its worst nightmare after an 'embarrassing' second successive group stage exit from the World Cup - with national legends, pundits and fans all furious at Hansi Flick's 'ROCK BOTTOM' side

Pele says hospital visit was only for a check-up

England break yet more records with their highest score in Asia after amassing a huge tally of 657 runs in day two of their first Test match against Pakistan, as Harry Brook smashes 27 off just one over

UEFA opens a formal investigation into Juventus for potential breaches of the Club Licensing and Financial Fair Play regulations... days after the entire board quit following charges relating to false accounting and market manipulation

Harry Brook stars as England rack up 657 against Pakistan

CanTyson Fury and Dereck Chisora put on a real show after setting frienships aside?

Luis Enrique ‘not happy at all’ after Spain ‘dismantled’ by Japan

Man United target Jonathan David hails the Premier League as 'the best league in the world' and admits he has ambitions to play in England 'some day'... as the Canadian forward backs his nation to 'learn and grow' after their World Cup exit

'This is the worst day of my career': Joshua Kimmich left devastated after Germany crash out of the World Cup... as the Bayern Munich star struggles to explain the national team's failings at recent tournaments

Analysis: Germany World Cup exit not as shocking as it looks

A wake-up call or a warning? The big question facing Spain at this World Cup

Is Serbia vs Switzerland on TV? Kick-off time, channel and where to watch World Cup fixture

Serbia vs Switzerland prediction: How will World Cup fixture play out?

Serbia vs Switzerland live stream: How to watch World Cup fixture online and on TV