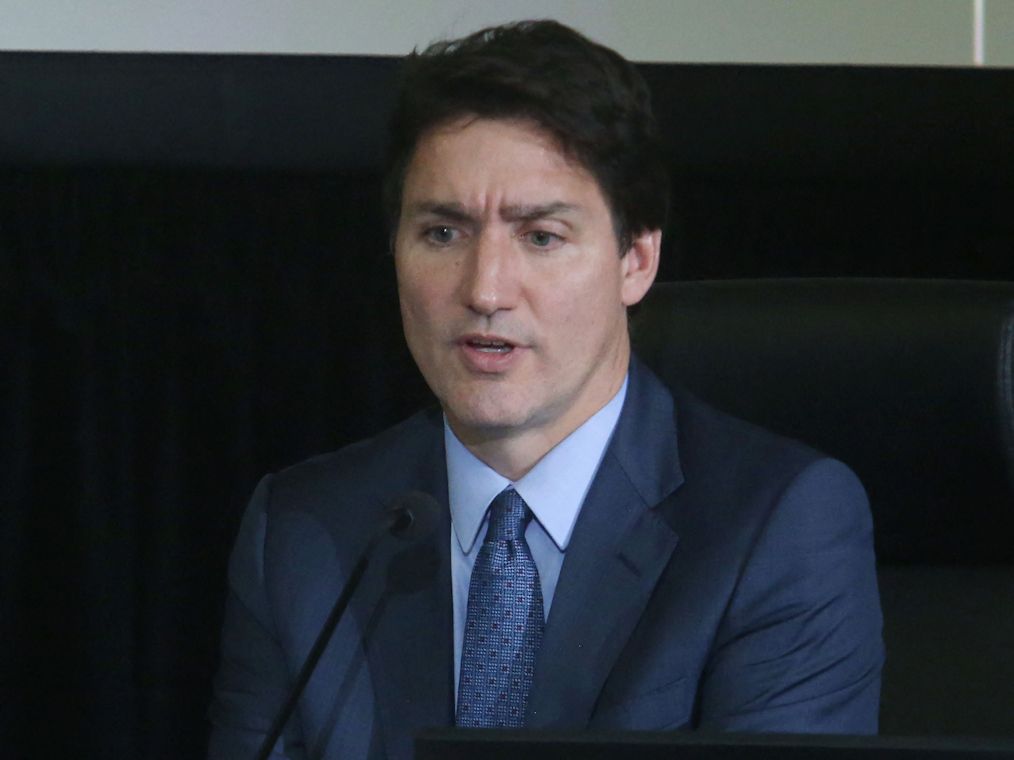 First Reading is a daily newsletter keeping you posted on the travails of Canadian politicos, all curated by the National Post’s own Tristin Hopper. To get an early version sent directly to your inbox every Monday to Thursday at 6:30 p.m. ET (and 9 a.m. on Saturdays), sign up here. 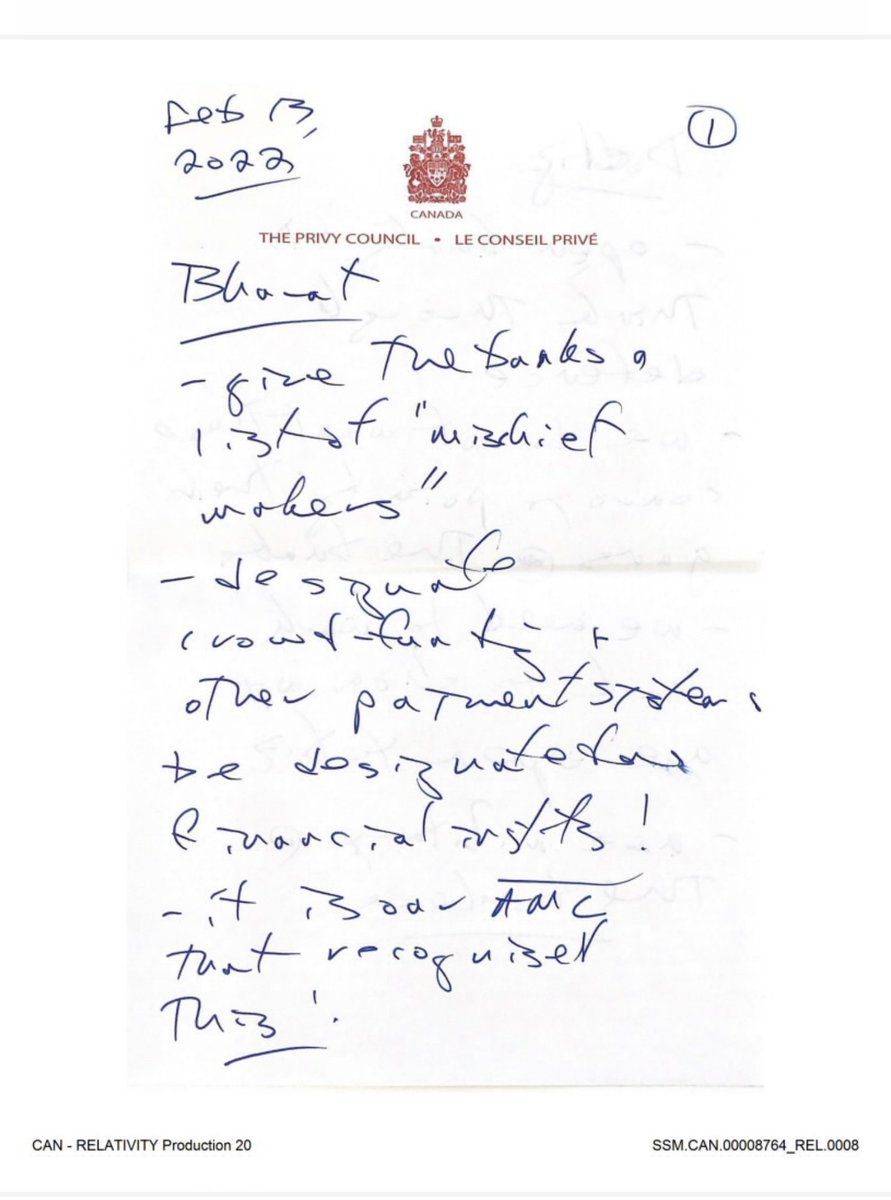 This hand-scrawled note by Deputy Prime Minister Chrystia Freeland was recently tabled before the Emergencies Act inquiry. Probably the most notable thing is the top line in which she suggests providing a list of “mischief-makers” to Canadian banks – which did indeed happen. Or you can marvel that Canada’s second-in-command has the illegible penmanship of a badly sleep-deprived physician.

It finally happened: Canada’s head of government appeared before a panel of inquisitors to answer for his decision to order the most sweeping suspension of Canadian civil liberties since the 1970 October Crisis. Not surprisingly, the testimony was deeply unsatisfying, particularly if you’re generally in disagreement with how things played out in February. Prime Minister Justin Trudeau denied doing anything wrong, blamed others and hinted that the “worst” might have happened if he hadn’t.

Anyway, here are the highlights …

He showed up late. Although this was apparently not the prime minister’s fault. He was sitting in a waiting room and they dawdled on calling him in.

He swore on a Bible. This isn’t necessary in modern Canadian legal proceedings; you can “affirm” a secular oath instead. But Trudeau opted for the religious option. He also delivered a lot of his early testimony in French, which was a little weird given that the questions (and indeed, almost the entire inquiry up to this point) were in English.

“I did not call people who were unvaccinated names,” Trudeau said in response to a question saying that he had referred to unvaccinated Canadians as “racists” and “misogynists.” We’ll let you decide if that’s true: The quote in question comes from a Sept. 2021 appearance on the Quebec talk show La semaine des 4 Julie, in which Trudeau said the following, “We all know people who are a little hesitant (about vaccination), and we’re going to try and convince them, but there are also people who are fiercely opposed to vaccination; who don’t believe in science, who are often misogynists, who are often racist as well.”

Another controversial line was when Trudeau said that “using protests to demand changes to public policy is something that I think is worrisome.” Freedom Convoy was quite a bit different than your garden variety Parliament Hill protest where people wave signs for a few hours and then go home; participants had openly promised to blockade public infrastructure until the government had rescinded all COVID mandates, even the provincial ones that were outside their jurisdiction. But that aside, basically every protest is usually convened to demand changes to public policy.

All things considered, though, the inquiry could reasonably be called a triumph for Trudeau. One notable indicator? The Conservatives have avoided touching this thing with a ten-foot pole. Conservative Leader Pierre Poilievre arguably owes his job to the emotions stirred by Freedom Convoy, but he’s generally steered clear of criticizing the government’s inquiry performance either in the House of Commons or on social media. In the words of pundit Don Martin, most Canadians didn’t watch the inquiry and won’t care what it rules, which ultimately makes it a win for the government. “To the largely-disinterested public, who watching the February protests dissolve in tandem with the Emergencies Act’s introduction, the ends will likely have justified the means even if (Commissioner) Rouleau decides the federal government lacked sufficient legislative authority to invoke the Act,” wrote Martin.

That’s not to say the Liberals were at all justified in invoking the Emergencies Act. And you can read John Ivison’s take here as to why they absolutely were not. But whether they’re found at fault is kind of a moot point anyways. NDP Leader Jagmeet Singh has already said that if the inquiry rules against the Trudeau government, he’s still going to continue propping them up until at least 2025.

It’s been a while since we’ve heard from the Toronto-area shop teacher who started showing up to class wearing giant prosthetic breasts. So it fell to the U.K.’s Daily Mail to detail a bizarre episode in which the teacher, identified as Kayla Lemieux, apparently went skydiving with Voodoo, a Canadian porn actor who works as a skydiving instructor and is also pretty open about his political conservatism. As Voodoo told the Daily Mail, “I had no idea I was taking the controversial transgender school teacher until they showed up to the drop zone. I’m not a fan of trans activism or Kayla’s behavior at the school but I’m a professional and I don’t discriminate.” Voodoo added, “I’ll throw anyone out of a plane.”

Western Canada is utterly rolling in tax revenue right now. While the idea of running a surplus is still a fanciful pipe dream to most Canadian governments, B.C., Alberta and Saskatchewan are all on track to end the fiscal year with a few extra billions lying around. Alberta is projecting a $12.3 billion surplus, B.C. is projecting $5.7 billion and Saskatchewan can likely pull off $1.04 billion. As to why, it helps that all three provinces owe much of their revenue to commodities like oil, natural gas, potash, food crops, lumber and coal, all of which are enjoying soaring world prices right now. They also have younger populations and are generally better at keeping spending in check. 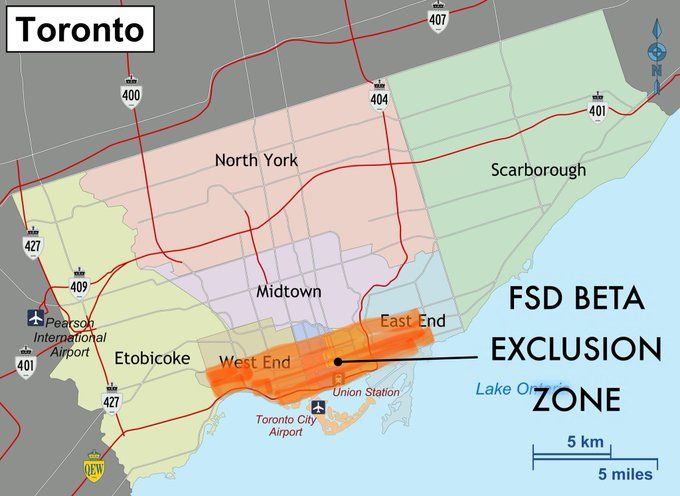 Toronto will shortly become one of the first places in Canada in which it will be legal to let your Tesla drive itself (the above map shows where it’s allowed). Why is this in a politics newsletter? Well, if Teslas suddenly start repeatedly smashing into buses whenever there’s a light snow, expect it to rapidly become a political issue. For now, Downtown Toronto remains off-limits for Teslas in self-driving mode for the precise reason that they can’t be trusted not to hit streetcars.

Canada appears to be officially done with policies to require masks for children. Last week, Alberta banned its school boards from imposing any future mask mandates, and forced masking for minors is even getting pooh-poohed in Ottawa, typically one of the more pro-masking cities in the country. A vote last week to reintroduce mask mandates within the Ottawa-Carleton District School Board ultimately came down to a tie vote, meaning the measure will not pass.

Get all of these insights and more into your inbox every weekday at 6 p.m. ET by signing up for the First Reading newsletter here.