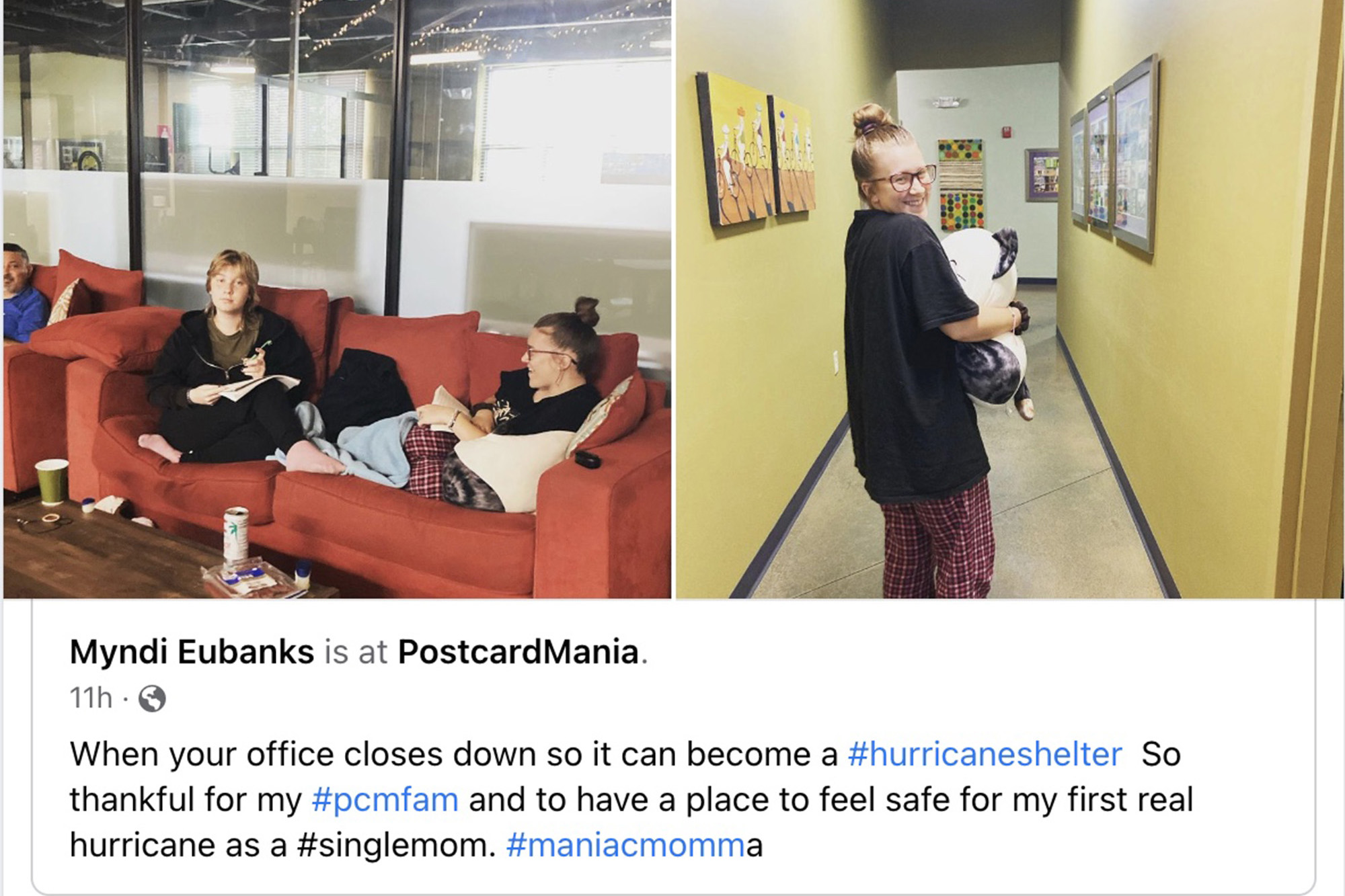 The CEO of a Florida company reportedly asked her staffers to keep working as Hurricane Ian was approaching – and even encouraged them to bring their children and pets by promising it would be “super fun for the kids!”

Joy Gendusa, CEO of Postcardmania in Clearwater, made the startling comments Monday as she downplayed the dangers of the hurricane by insisting the media were overhyping the severity of the monster storm, VICE News reported.

“If you want to leave your home and you’re being told to leave your home, and you feel like you should and you have no place to go, PCM [Postcardmania] is probably the safest place to be in Florida,” Gendusa told workers on Zoom, the outlet reported, citing a copy of minutes from the meeting.

“Anyway, bring your pets, bring your kids, bring everybody to PCM,” she said, referring to the postcard marketing outfit. 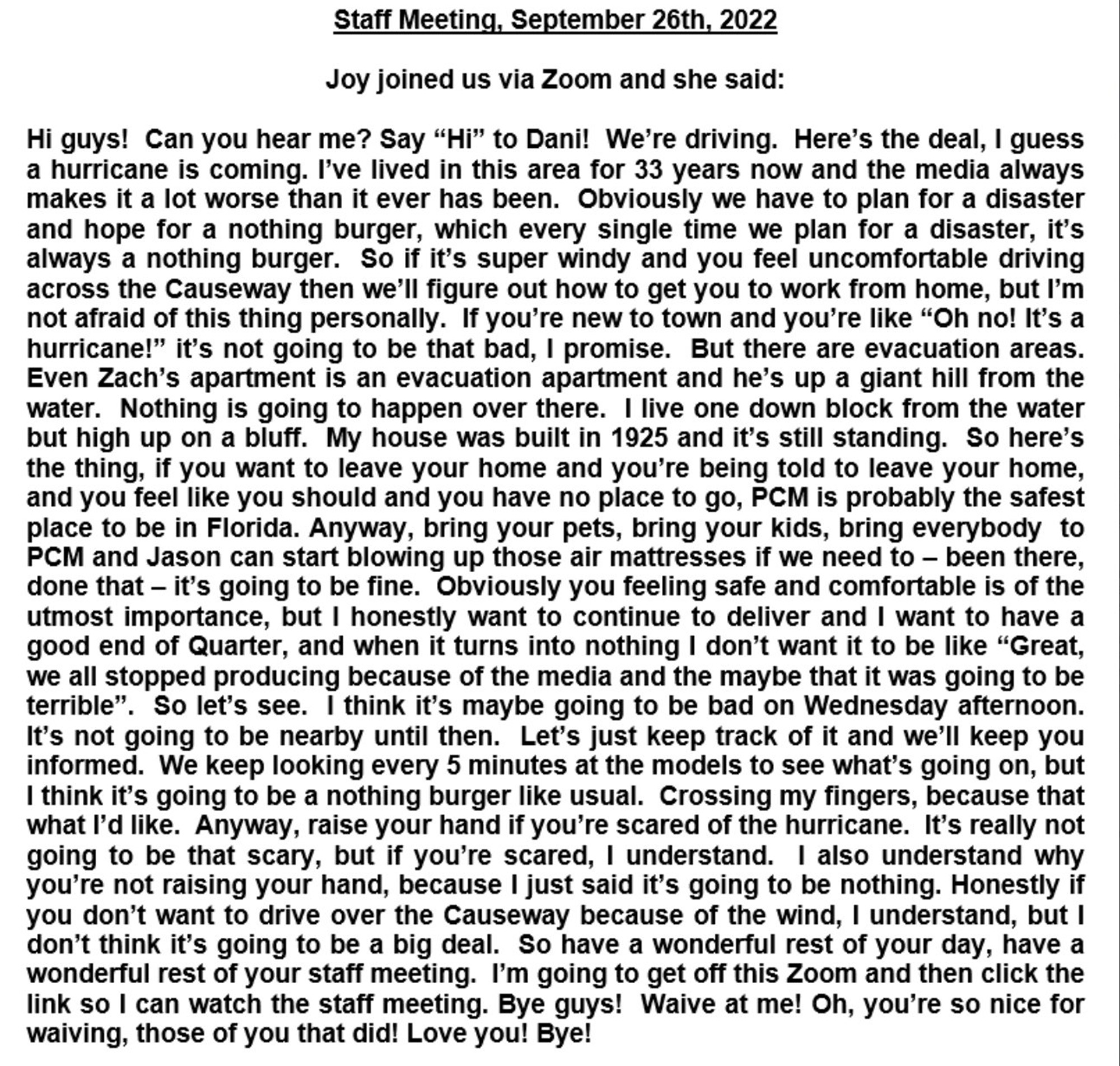 Postcardmania CEO Joy Gendusa reportedly encouraged the staff to continue working in the office — and to bring their kids and pets as well — as Hurricane Ian approached.

“Obviously you feeling safe and comfortable is of the utmost importance, but I honestly want to continue to deliver and I want to have a good end of quarter,” the CEO continued.

“And when [the hurricane] turns into nothing, I don’t want it to be like, ‘Great, we all stopped producing because of the media and the maybe that it was going to be terrible,’” she added about Ian, which ended up slamming into the Sunshine State as a Category 4 hurricane.

The employees also were sent a text asking them to come to the office so the company could continue offering services for clients outside the state. 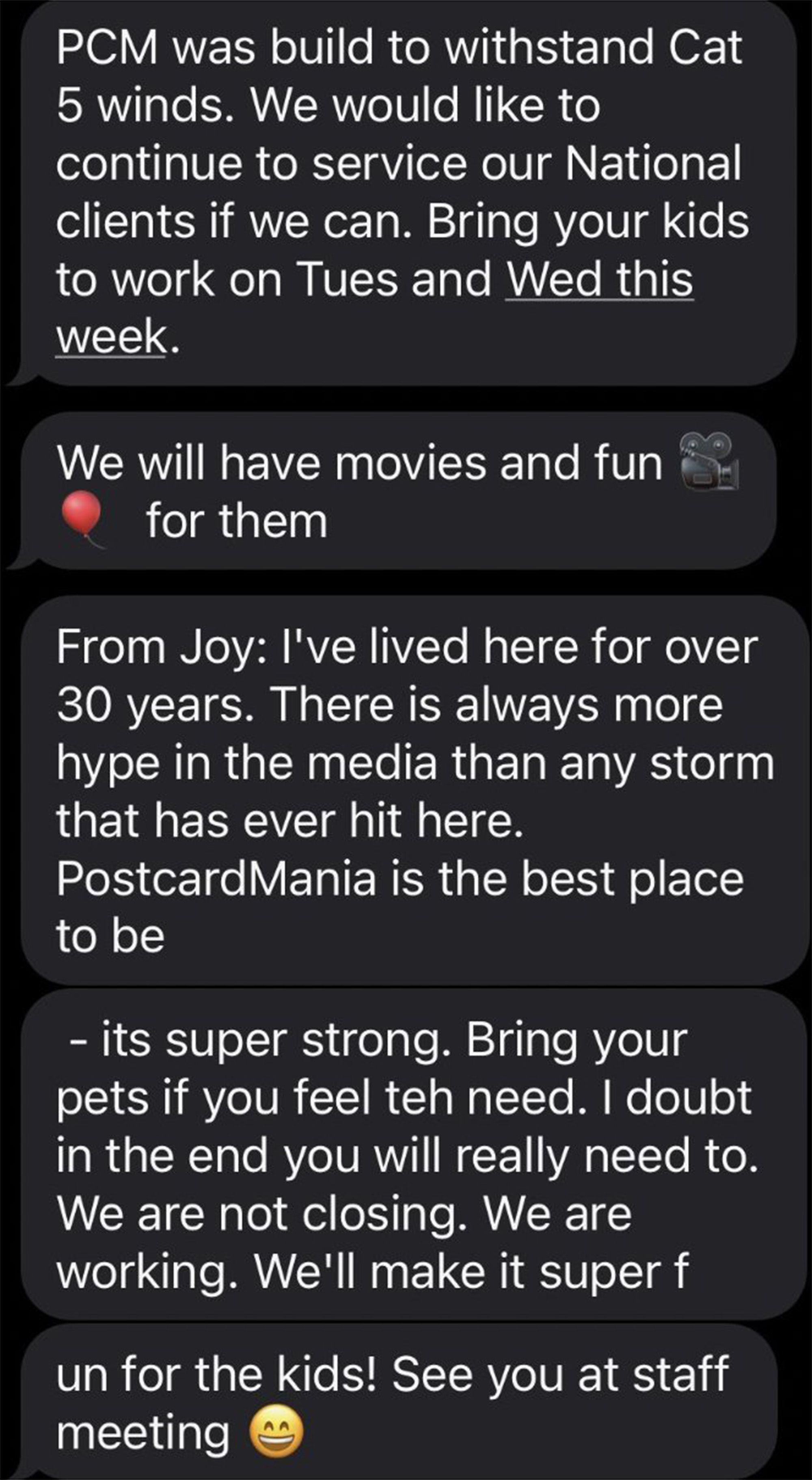 “We are not closing, we are working. We’ll make it super fun for the kids!” the CEO reportedly told the employees.

“PCM was built to withstand Cat[egory] 5 winds. We would like to continue to service our National clients if we can. Bring your kids to work on Tues and Wed this week,” the text read.

“There is always more hype in the media than any storm that has ever hit here…bring your pets if you feel teh [sic] need. I doubt in the end you will really need to. We are not closing, we are working. We’ll make it super fun for the kids!” Gendusa added in messages first reported by Jonah Furman of Labor Notes.

The company has a 69,000-plus-square-foot headquarters in Clearwater, which later declared a state of emergency as the storm was approaching, VICE News reported.

PCM’s vice president of human resources also sent an email saying reiterating the ability of the headquarters to withstand the storm’s wrath, the outlet said.

“You will be allowed to bring your children to work those two days. We will have movies and other fun stuff in the common area to keep them entertained,” the HR honcho reportedly wrote.

But after a journalist tweeted the messages, the same VP emailed the staff Tuesday: “We wanted to make sure you know that PostcardMania offices will be closed Wednesday & Thursday this week,” adding that PCM “hope[s] to reopen our offices on Friday.”

One employee told the outlet that the company likely reversed course amid backlash on social media.

“I was under the impression that we were expected to work, and if you had to work from home or an evacuation zone, log in on your laptop,” the employee told VICE on condition of anonymity. “The messaging was ‘production will not slow down,’ consistently up until that post went viral.”

Another staffer described the company’s culture as a “facade.”
“They want to give off the look of their company being a fun environment, but at the end of the day work/life balance is nonexistent,” the employee told the site, also on condition of anonymity. 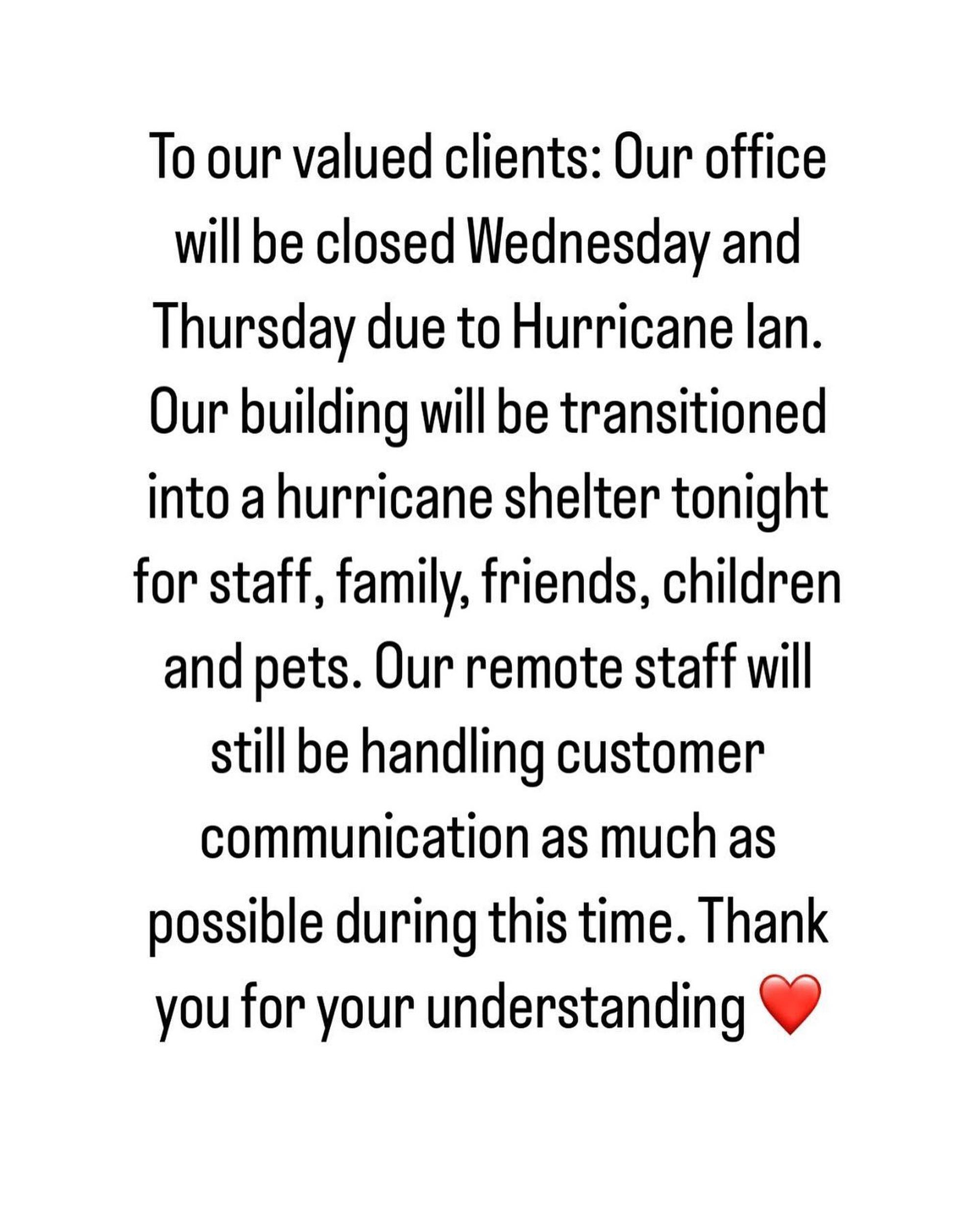 The company later informed the staff that it would close the office and turn it into a shelter.

PCM said that it was “not correct” that Gendusa asked employees to work through the hurricane.
“Our office is closed Wednesday and Thursday,” the company’s PR team told the outlet “We have some employees voluntarily working remote who are safely located in non-evacuation zones. Our building is open as a shelter during the hurricane for staff, friends, children and pets. We did this during Irma as well.”

VICE said the company did not respond to questions about Gendusa’s reported internal communications.

On Wednesday, the CEO apologized for the earlier missives, according to an email the company shared with VICE News.

“I know this has been a stressful time, and I want to apologize to anyone who received our text message on Monday and felt that it came across as insensitive,” Gendusa wrote.

“That text did not accurately reflect how seriously we were taking this storm and everyone’s safety, and I regret that it was sent without better judgment,” she continued.
“We never intended to make people feel like they had to come in to work when they need to evacuate or take other hurricane precautions,” Gendusa added.

Honda's hot Type R brand now has its own space in Newmarket, Auckland

The three men were pictured hovering precariously on the vessel's rudder, just above the waterline.

Elevated risk of bushfires this summer for most of NSW

What a UN mission says about reef health

More than 400 homes in flood path in SA