Floyd Mayweather’s bodyguard Ray Sadeghi is calling for a rematch with Japanese kickboxer Koji Tanaka after being spectacularly knocked out on TBE’s undercard.

Despite outweighing his opponent by 42lb, Sadeghi quickly ran out of gas and was eventually knocked out by a clubbing right hand in the third round of the open weight boxing clash.

But undeterred by his defeat, Sadeghi is keen to run it back with Tanaka. Speaking to World Boxing News, he said: “I want to thank RIZIN and my boss Floyd Mayweather for giving me this opportunity to be in [an event of] this kind of magnitude and to fight.

“It was a great match. I want to run it back. Because I felt like I had him. But I got tired in the third round, and my hands dropped. He caught me with a good shot, and we can run it back.”

He continued: “I have dreamt of fighting in the ring professionally. So this was a dream of mine which came to fruition with the help of my father, the lord, RIZIN, and my best friend/ boss Floyd “Money” Mayweather. I want you all to know there is more to come. I cannot wait to share it with you all. Tokyo, I’m here. I encourage everyone to look ahead to the future and believe.

“Not only in your father but in yourself. I came from nothing and used to steal food for my family to eat. Now I am bringing forth energy of love, abundance, and success. I choose faith over fear! And I encourage everyone to believe and never let their dreams go. If I can do it, you can do it!”

Paul teases announcement that could kill off Fury fight for good 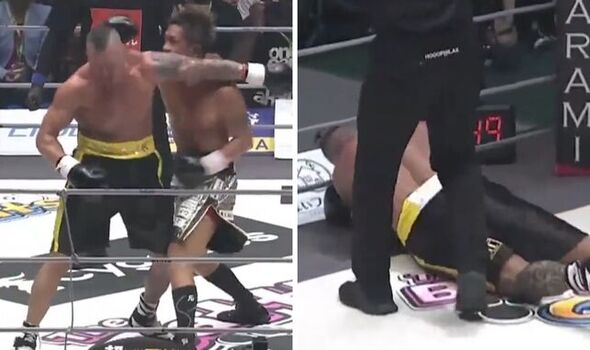 Sadgehi was knocked out by Tanaka

In the main event, Mayweather marked his fourth exhibition bout with a second-round stoppage victory over Mikuru Asakura. Mayweather reportedly netted an eye-watering £18.2million ($20million) for just six minutes of work and will now face KSI’s brother Deji Olatunji on November 13 at the Coca-Cola Arena in Dubai.

Western Australian Fisheries Minister Don Punch announced a recreational fishing ban in a bid to reduce the mortality rate of demersal species by 50 per cent. “If we don’t act now, if we don’t put these measures in place, then we may well be facing a much more challenging situation ...

Tim Cook joined other tech leaders in touting the advantages of buying chips made in the US. Apple plans to start using processors made in America following the opening of an advanced new chip factory in Phoenix, Arizona. For the plant’s customers, which also includes AMD and NVIDIA, the ...

Georgia Fowler has given an update on her wedding plans as she attended a luxurious Sydney Harbour cruise this week. The Victoria’s Secret model, 30, gave fans an insight into her progress for the big day as she revealed she will be tying the knot to Fishbowl founder Nathan Dalah in ...

Australia will no doubt have come away from the 2022 World Cup feeling much better about the state of affairs than beforehand – but how will the team grow in the future? The Asian Cup is set to be hosted either in late 2023 or early 2024 in Qatar, so ...


View more: 2026 Socceroos: how this picture will change

‘Daredevil’ Disney+ Series Adds Sandrine Holt, Margarita Levieva to Cast “Daredevil: Born Again” at Disney+ is building out its cast, Variety has confirmed with sources. Margarita Levieva and Sandrine Holt have both been cast in the Marvel Studios series. They join previously announced leads Charlie Cox and Vincent D’Onofrio ...

WA’s Banksia Hill Detention Centre, where most of the state’s juvenile detainees are housed. (Four Corners) Lawyers representing hundreds of current and former detainees of Western Australia’s notorious youth detention centre have filed a class-action lawsuit against the state government. Sydney-based lawyer Stewart Levitt, who is leading the case, said ...

A South Melbourne man woke up to a call from lottery officials confirming his $30 million Oz Lotto win in last night’s draw. The Victorian man held the only division one winning entry in Oz Lotto draw 1503, drawn Tuesday 6 December 2022, and scored a total prize of $30,061,064.85. ...

Did these two tennis hotties come out together, or are they just bromancing too close to the sun?

Indigenous Voice to Parliament 'not a voice of peace'