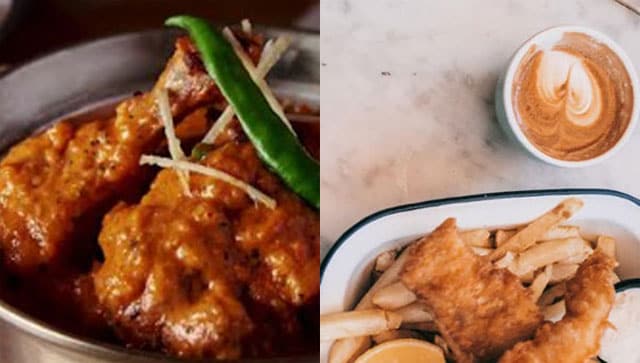 For the United Kingdom, India is the flavour of the season. Geetanjali Shree’s novel, translated from its original Hindi to English by Daisy Rockwell, won the International Booker Prize; Rishi Sunak, son-in-law of Indian tycoon Narayan Murthy, is one of the top contenders for British Prime Ministerialship; and staid British fashion label Burberry just cast a four-year-old Sikh boy wearing his patka (a piece of cloth which acts as the precursor to the turban worn by Sikh men) with pride as the model for their Children’s Autumn-Winter ’22 campaign. All this may be new, but there is no denying that the two countries go back a long way. And nowhere is this connection more evident than in their culinary legacy.

The British East India Company first arrived in India to trade in spices, particularly pepper, due to its high demand as a preservative for meat. When the British discovered the range of spices available in India, they began using them to add subtle hints of flavour to their own bland fare. Of these, cumin, cinnamon, turmeric, pepper and coriander powder were the chief exports to the mainland.

As the British firmly entrenched themselves in the Indian landscape, an exchange of flavours between British and Indian food began to take place. When the traders first descended on Indian shores, their journey was a long and arduous one. Most women therefore remained in England while the male explorers and traders made their home – and quite often hearth – with local women in India. When the Suez Canal opened in the year 1869, it allowed women to accompany their men, in turn heralding an experimental phase that led to the birth of ‘Anglo- Indian’ cuisine. Women held on to traditional recipes and dishes while men, who were by now accustomed to flavourful food preferred ‘Indianised’ versions of British staples like meat and potatoes.

This led to an interesting hybridised cuisine, which British author Aldous Huxley made assiduous note of in his writings. Among other fare, he points to interesting fusion dishes like kidney toast Madras style, Madras fritters, and leftover meat minced and refried with ginger and chillies. Another famous concoction from this time is the kedgeree, a mix of rice, fish and hard-boiled eggs, served with butter or cream, which was clearly inspired by the popular Indian comfort food known as khichdi.

Nearly 200 years after first establishing themselves as rulers of the Indian subcontinent, the British left India, but carried its flavourful cuisine with them, making it a firm fixture on Britain’s palate. The immense popularity of the dish known as ‘Chicken Tikka Masala’ is testament to this. In 2001, when the British Foreign Secretary, Robin Cook gave a speech hailing it as a symbol of modern multicultural Britain, it widely became known as the country’s national dish. Amit Bagga, co-founder of popular Delhi restaurant Daryaganj traces the emergence of Chicken Tikka Masala to the 1960s. He shares, “This dish is an adapted version of the original Butter Chicken invented by Kundan Lal Jaggi in Daryaganj in 1947. Prime Minister Nehru had appointed Kundan Lal Jaggi as his official caterer for state banquets and this is where foreign guests had exposure to his dishes, often requesting for the recipes and taking them back to their respective countries.”

Another major export is the ‘curry’ – a single word used to denote the numerous varieties of Indian spicy broths that are usually served with rice. However, a curry served in the UK is nothing like an Indian curry, asserts Ruhi Grover, Director at a Richmond-based Charity, who lived in India before moving to London some years ago. She does however appreciate the fusion cuisine which popular eateries like London-based Dishoom create, by picking the best
of both British and Indian fare.

Just as Indian food has made a mark in the UK over the years, British cuisine also has a large fan following across India. This is most evident from the enduring success of colonial clubs around the country, as well as old-school neighbourhood bakeries that have steadfastly withstood the onset of their fancy French counterparts over the years.

Akash Kalra, Managing Director of the famed United Coffee House, whose legacy dates back to the days of the British Raj says, “The founder Lala Hansraj Kalra was a well-travelled businessman who introduced British club food on the menu, which later expanded to include other European dishes. Some of its most popular dishes over the years have been the Tomato Fish, Nargis ke Kofte, Butter Chicken, Keema Samosa and richly brewed Cona Coffee. As his grandson and third generation restaurateur, I have rebranded it while retaining its rich heritage and nostalgia through many of the old and classic recipes dating back to Victorian times. We serve typical English breakfasts, afternoon tea trays, early suppers and late night coffees because our patrons love them.” Though a mutual love of each other’s cuisine exists in both countries, is there really any similarity between them? Aastha Jain, an Indian-born independent lawyer practicing in London does not believe so. For her, the biggest difference between the two is that Indian food has varied flavours due to its liberal use of traditional spices, where British food thrives on its simplicity. That’s not to say that she doesn’t enjoy them equally. “I love a typical English breakfast, Mushroom Pie and Fish and Chips, just as much as I love Mughlai and South Indian dishes!” Ankita Cheema, another Indian-born resident of London echoes her when she says, “I find no similarity between Indian and British food. All Indian food is quite original and unique, however British food is very derivative of other cuisines such as Chicken Tikka Masala, Spaghetti Bolognese etc. Many think that Fish and Chips is British, but it actually originated in Portugal.”

This diversity of fare is perhaps the biggest argument for the similarity of the two cuisines. Indian food has evolved over centuries inspired by the many outsiders who made this part of the world their home. Similarly, Britain has adapted the cuisine of other nations that it has ruled over or been closely associated with, into its own. Another close bond between the two countries is the love of delicious food in general. A few years ago, when Michelin star chef Mark Poynton from England visited India for a food festival, he summarised the connection thus, “The biggest similarity between the cuisines is they both involve honest cooking. By that, I mean you can tell that the people cooking the food, no matter where you are, really care about what they are cooking for you. Also, the produce they are cooking with, always leads to better food in the end.” A sound argument indeed.

Rachel, 51 and Stephen Kinnock, 52, have described 'slow grief' of the disease Baroness Kinnock was left 'mortified' as her memory gradually slipped awayLord Kinnock, 80,  has previously said he deals with the challenge 'out of love'

If last Sunday felt a little different … well, it should have felt different. Between 4 o’clock and 5 o’clock, the following things happened: The Giants outlasted the Panthers at MetLife Stadium, 19-16, on a 56-yard field goal by Graham Gano. The Jets pulled off a miracle in Cleveland, rallying ...


View more: Locals’ undefeated weekend even rarer than you think

Get all the glitz, glamour and gossip from the first Strictly Come Dancing live show HERE


View more: 'I got in a bit of a muddle!' Strictly's Shirley Ballas suffers a hilarious blunder as she accidentally gives Tyler West and Dianne Buswell the 'wrong score' following their debut dance

Sunday, Sept. 25 – Saturday Oct. 1 ALTERNATE SIDE PARKING RULES ARE SUSPENDED MONDAY AND TUESDAY FOR ROSH HASHANAH There are back-to-back NFL games at the Meadowlands Sunday and Monday as the Jets take on the Bengals Sunday at 1 p.m. and the Giants face arch-rival Cowboys Monday at 8 ...