A “flash mob” of looters were caught on camera ransacking a 7-Eleven in Los Angeles earlier this week — making off with handfuls of cigarettes, snacks and other goods, authorities said.

Video clips released by Los Angeles police show dozens of people, many of them not bothering to hide their faces, grabbing up various items as they swarmed the chain store Monday shortly after midnight in the Harbor Gateway section of the city.

Part of the footage even shows the rowdy bunch going behind the counter that was apparently vacated by 7-Eleven employees and flinging items toward a pack of people on the other side. 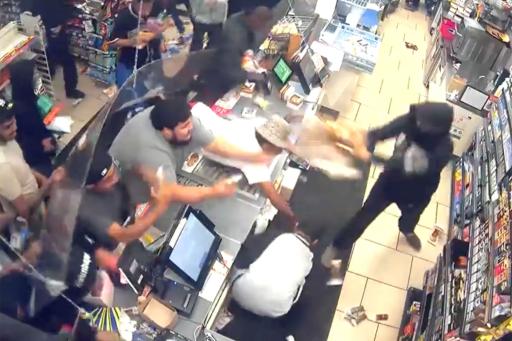 The suspects of the flash-mob robbery were able to avoid police. No arrest have been made. 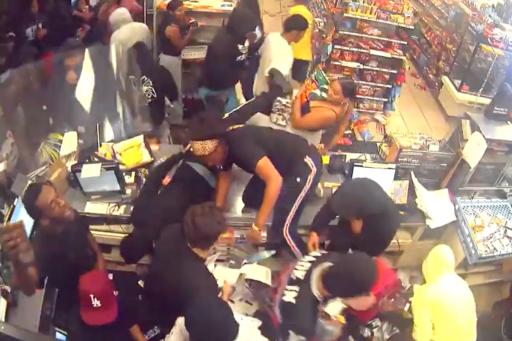 Police are asking to public for any help in identifying any of the suspects caught on video during the robbery.

Snacks, drinks, cigarettes, lottery tickets and other merchandise were all lifted from the store that also was vandalized, according to police. Looters also allegedly threw items at store employees.

After exiting the store, the throngs of suspects quickly left the area before cops arrived, police said.

The robberies occurred during a street takeover where drivers flooded and blocked a city intersection with their vehicles from all directions to create a “pit” in the middle of it, police said.

Spectators got out of their cars and watched as drivers started “doing donuts,” authorities said.

“The term ‘flash mob’ was first used to describe a large public gathering at which people perform an unusual or seemingly random act and then disperse, typically organized by means of the internet or social media,” the LAPD said in a statement.

“In the latest cases, however, ‘flash mobs’ have turned from fun spontaneous events to opportunistic criminal occurrences.”

Police were seeking the public’s help in apprehending the suspects.

Hertz and BP Pulse, the oil giant’s EV charging unit, will install thousands of chargers at Hertz sites across the U.S. The chargers will support Hertz’s plans to add hundreds of thousands of EVs to its fleet over the next several years. Some of the new chargers, at high-traffic ...


View more: Hertz Is Teaming Up With Oil Giant BP to Install Thousands of EV Chargers in the U.S.

In 1992, at the age of 32, to 15 terms of life imprisonment, with another life term added at a later date – however, just over two years into his sentence, he would be murdered. The is currently the subject of much discussion following the release of the new Netflix ...


View more: How did Jeffrey Dahmer die? Serial killer’s death explained, who is Christopher Scarver - where is he today

The Tennerhof – one of the best ski hotels in Kitzbuhel Old coaching inns converted into four- and five-star hotels vie for space in Kitzbühel’s ancient streets alongside smart fashion boutiques and wickedly expensive cafés. But despite the resort’s diamond-studded image, the cost of a stay here can be ...

the londoner Compared to the likes of Italy and France, Austria is the undisputed Alpine king of après, and one of the big attractions of Kitzbühel is its buzzing nightlife scene. During January’s Hahnenkamm races weekend, the atmosphere is particularly boisterous, with, if regulations permit, street parties and live ...

Nicolas Datiche/Pool Photo via AP Japan’s assassinated hawkish former leader, Shinzo Abe, was given a rare state funeral Tuesday that was full of military pomp and surrounded by throngs of mourners as well as by widespread protests, with thousands taking to the streets in opposition. Prime Minister Fumio Kishida ...

OnePlus Nord Watch is likely to debut in the first half of October.

An early morning armed carjacking in Philadelphia involving a mother and her teenage daughter was caught on video, authorities said. The pair were leaving their home around 6:20 a.m. on Sept. 19 when they were ambushed by a carjacker with a gun, the Philadelphia Police Department said in a ...

Cyberpunk 2077 Quest Director Gets Emotional About Resurgence: 'It's F**king Good to be Back'