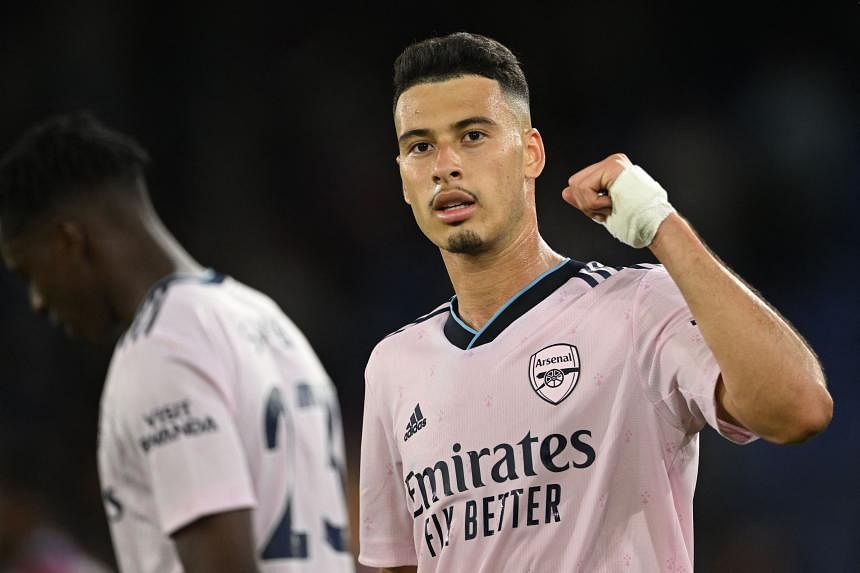 LONDON (REUTERS) – Arsenal battled to beat Crystal Palace 2-0 on Friday (Aug 5) to get the new Premier League season under way, with Gabriel Martinelli scoring the first goal before home defender Marc Guehi turned the ball into his own net late on at Selhurst Park.

The Gunners, who finished fifth last term, took the lead in the 20th minute when new signing Oleksandr Zinchenko headed Bukayo Saka’s corner back across goal and Martinelli was on hand to nod home as the Palace defence was caught flat-footed.

The hosts could have levelled either side of the break and Arsenal goalkeeper Aaron Ramsdale had to pull off a couple of brilliant reflex saves to deny Odsonne Edouard and Eberechi Eze.

Palace coach and ex-Arsenal midfielder Patrick Viera threw everyone forward for the last 15 minutes but the visitors doubled their lead when Saka’s cross was deflected into his own goal by Guehi in the 85th to seal the points for the away side.

Forgotten Aston Villa man Bertrand Traore is attracting interest from Istanbul Basaksehir, with Steven Gerrard still willing to listen to offers for several of his players


View more: Fulham speak to Brighton over a £15m deal for forward Neal Maupay as the Cottagers look finalise the signing of Justin Kluivert from Roma on loan


View more: Dele Alli close to completing move to Besiktas from Everton, with Turkish club hoping to secure deal in time for him to be at their next match on Sunday

HOUSTON – On Sunday, about a dozen charter buses carrying families and community leaders from Uvalde pulled up to Minute Maid Park to watch the Astros in action. “It’s my first time, and I’ve been a big fan for a long time,” Former Robb Elementary Principal Mandy Gutierrez said. ...


View more: From one England captain to another! Harry Kane names John Terry as one of the toughest defenders he's played against in Instagram Q&A to celebrate 10 years since his Premier League debut

Gianluca Scamacca has been backed to score ‘plenty more’ after opening his West Ham account as the Hammers began their latest European campaign with a 3-1 win over Danish club Viborg. Italy striker Scamacca, David Moyes’ marquee summer signing from Sassuolo, netted a first-half header on his full debut in ...


View more: Barcelona striker Robert Lewandowski has his €70,000 watch STOLEN outside their training ground... with the 33-year-old attempting to chase after the thief himself  following the incident

Leicester begin talks with 'outstanding' James Maddison over new contract at the King Power Stadium... after heavy interest in the midfield star from Newcastle throughout the summer

England's Stuart Broad: We've got a genuine feeling we're still in this game

Pakistan cruise to seven-wicket win as Dutch crash in Rotterdam

Mike Dean: I made mistake over hair-pull in Tottenham and Chelsea game