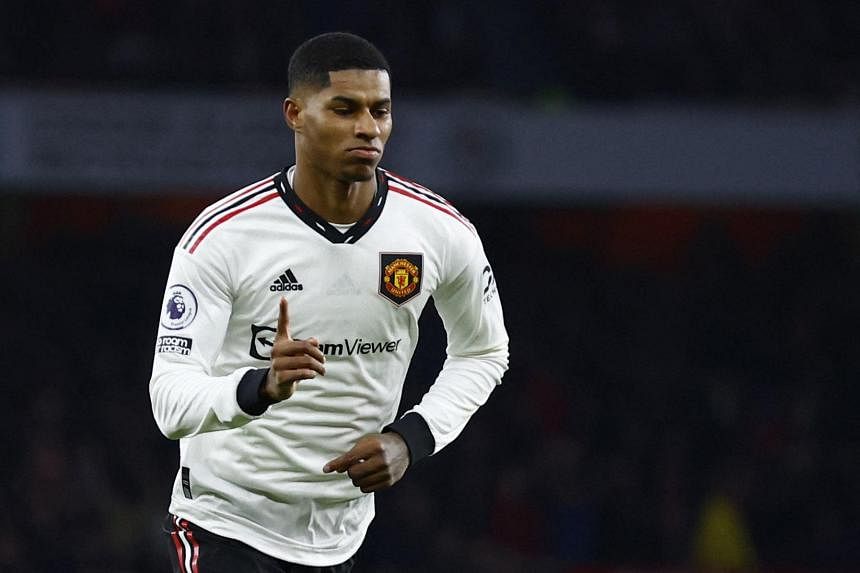 LONDON – Erik ten Hag has told Marcus Rashford to stay at Manchester United because the manager wants to transform them into the world’s best team.

United have failed to win the Premier League since Alex Ferguson retired in 2013 and their last major trophy was the Europa League in 2017.

It is their worst trophy drought in 40 years, but United boss ten Hag is showing signs of being able to rebuild the club after a positive start to his reign this season.

England forward Rashford has emerged as a key figure in United’s climb to fourth in the Premier League.

After two years of poor form, the 25-year-old has been revitalised by the Dutchman and United hope he will extend a contract that has 18 months to run.

French giants Paris Saint Germain were linked with Rashford last season but, on the eve of the first leg of United’s League Cup semi-final at Nottingham Forest on Wednesday, ten Hag made a confident pitch to the forward to remain at Old Trafford.

“I think he understands Man United is his club. That’s first. But also, in this environment, in this team, I think he is playing his best football,” the manager told reporters.

“He’s improving and that’s about him because he’s working on the good things. He’s giving 100 per cent energy, he has a good plan and I think also in this team he can bring in his qualities.

“So, this team can help him get in the right position and to score goals, where he is good at. If we want to get the success we want, we need him.”

Rashford has scored 17 goals in all competitions for United this season and shone for England at the World Cup in Qatar.

Asked about a potential revival of PSG’s interest in Rashford, ten Hag said: “I hope that all our players get an interest from clubs because that means we do a good job, the team is outperforming, so that is what we are aiming for.

“Then, I would say this is the best place to be because we want to construct the best team, first of England and then in Europe and then in the world.” AFP

Chelsea agree £26m deal to sign Lyon right-back Malo Gusto... though the French U21 international will remain with the Ligue 1 club on loan until the end of the season

RB Leipzig 2-1 Stuttgart: Dominik Szoboszlai strikes twice for the hosts as Marco Rose's side pile pressure on Bundesliga leaders Bayern Munich... as they close the gap at the top to just one point

'NOBODY believes you!': Liam Smith laughs off elbow accusations with Chris Eubank Jr's team considering appeal for alleged illegal strike in the win over the 33-year-old... as the Liverpudlian urges his rival to 'just take the rematch'

Kieran Trippier signs new contract at Newcastle after starring in Eddie Howe's rock solid defence... as the England right-back - who says he is playing the best football of his career - extends his stay at St James' Park until 2025

Newcastle tie Kieran Trippier down until 2025

Mohammed Ben Sulayem, 61, took over the governing FIA 13 months ago Formula One ruler has been ambushed by remarks he made on his old websiteComes after Ben Sulayem was criticised for saying F1 was not worth £16billion


View more: Formula One chief Mohammed Ben Sulayem faces more backlash after controversial remarks made on his old website resurface in which he suggested he 'does not like women who think they are smarter than men'

Sir Clive Woodward, Danny Cipriani and Chris Foy discuss the Six NationsTournament starts next week with Ireland's trip to Wales and the Calcutta CupEngland are going into their first matches under new boss Steve Borthwick

Leicester manager Brendan Rodgers criticised his players last week (Nick Potts/PA) (PA Wire) Brendan Rodgers insists his demands are clear and Leicester’s players must expect a blast if they drop their standards. The manager criticised their lack of quality and care after the 2-2 draw with Brighton last weekend. ...

Djed Spence is set to leave Tottenham on loan this month (Zac Goodwin/PA) (PA Wire) Tottenham full-back Djed Spence is expected to leave on loan during the final days of the January transfer window, the PA news agency understands. Spence has struggled for minutes since his summer switch from ...

'That finish was a thing of BEAUTY!': Fans react to unlikely goalscorer Nathan Ake's 'incredible' threaded strike against Arsenal which sends Manchester City through to the FA Cup fifth round

Q&A: ‘The best of Jeremy Peña is about to come’: Former Astro Carlos Correa talks offseason, the Twins, and his future TV broadcast career

Man City 1-0 Arsenal: Pep Guardiola's side draw first blood over their Premier League title rivals as Nathan Ake's second-half goal sees them knock the Gunners out of the FA Cup to reach the fifth round

Hollywood star Ryan Reynolds insists the PREMIER LEAGUE is his ultimate aim for Wrexham under his and Rob McElhenney's ownership... as he admits people stop him on the streets of New York to discuss the Welsh club

EXCLUSIVE: The ECB have offered Azeem Rafiq three days with their legal team ahead of public Yorkshire racism hearing... while key witnesses and those accused may not be involved in proceedings

Conor McGregor hit by a car while out riding his bike

Manchester City vs Arsenal LIVE: The Premier League's top two face off in the FA Cup fourth round as Pep Guardiola's Man City host Mikel Arteta's Gunners at the Etihad in their first of two meetings in three weeks

EXCLUSIVE: BBC consider axing the daily tips from Radio Four's flagship Today programme... with former BBC racing correspondent Cornelius Lysaght claiming it is 'another kick in the teeth for horseracing'

‘It Wasn't My Time': Conor McGregor Credits Judo, Wrestling For Saving His Life After Bike Crash

Harry Kane's chance to overtake Jimmy Greaves and become Tottenham's all-time leading scorer may be put on hold... with the striker facing a late fitness battle for Preston clash after missing training TWICE with a fever

Nicolo Zaniolo 'REJECTS a move to Bournemouth' after telling his agent he's 'not interested in continuing negotiations'... leaving his future at Roma in limbo after asking to be sold

Christophe Galtier reveals PSG have FOUR vice-captains amid leadership row at the club... but Lionel Messi is NOT one of them - with Mbappe, Ramos, Kimpembe and Verratti part of group supporting Marquinhos

EXCLUSIVE INTERVIEW: Ally McCoist leaves social media to his eldest sons as he's praised for his co-comms, but he enoys listening to the opinions of 'excellent' colleagues Graeme Souness and Roy Keane

REVEALED: Artur Beterbiev stops eating three days before a fight to turn from 'fun guy' into an 'angry beast' as fearsome Russian - who has won all his 18 fights by knockout - seeks to overcome Londoner Anthony Yarde

Laurent Blanc insists Lyon have 'guaranteed' star right-back Malo Gusto will be STAYING with the club past January after they rejected the Blues initial bid, dashing Graham Potter and Chelsea's hopes of splashing more cash in the transfer window

David Moyes insists West Ham have 'NO intention' of selling Michail Antonio this transfer window after losing Danny Ings to injury, despite the forward admitting he has been in talks with other clubs