For pregnant women with cancer, doctors fear abortion bans 'could be a death sentence'

For pregnant women with cancer, doctors fear abortion bans 'could be a death sentence'

A key choice may be taken out of the patient's hands, oncologists say.

“This ruling is going to impact many different aspects of women's health and women's health care — but specifically for cancer patients, this could be a death sentence for some of them,” Dr. Shikha Jain, an oncologist at the University of Illinois Cancer Center, told ABC News.

Many common cancer treatments run the risk of severely damaging a growing fetus or being harmful to a woman's reproductive system, especially in the first trimester of pregnancy. Because of this, pregnancy tests are commonly administered to patients with cancers and many doctors have conversations about fertility with patients right after a cancer diagnosis when discussing treatment options.

MORE: Where abortion stands in your state: A state-by-state breakdown of abortion laws

Many state abortion bans include exceptions for when the life of the mother is at risk. However, multiple oncologists told ABC News that cancer patients may not qualify for those exceptions as the new laws are currently written, or patients may have to go to court to secure abortion access — potentially delaying treatments.

Dr. Banu Symington, an oncologist in southwest Wyoming, said cancer patients who are pregnant can be faced with stark choices about their futures. 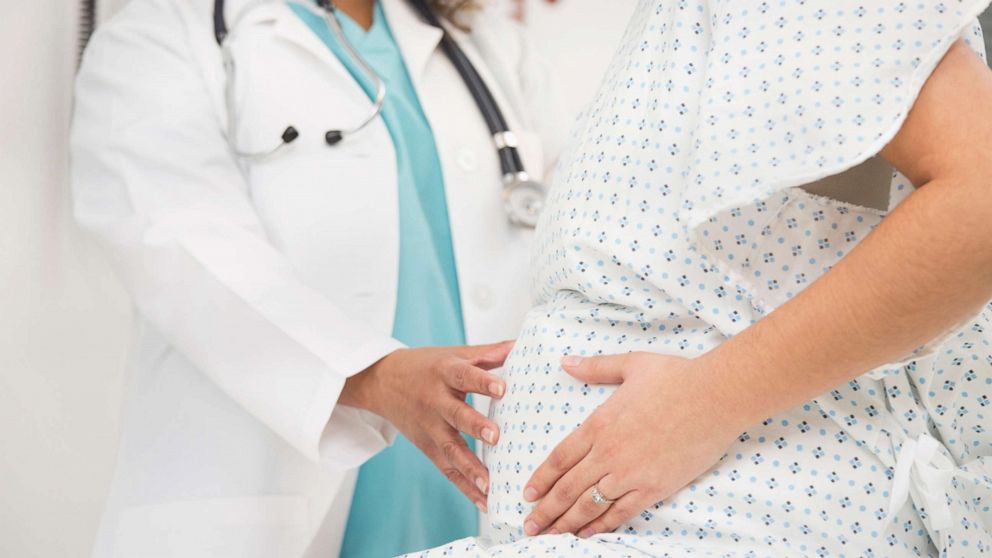 A stock photo of a doctor with a pregnant patient. STOCK PHOTO/Getty Images

While “we generally discourage treatment with chemotherapy in the first trimester of a pregnancy because chemotherapy can be a mutagen, it can cause birth defects,” she said, there are other risks: “If they don't start chemotherapy, their curable cancer, for example, may be incurable by the time their pregnancy comes to term. Their child may have to grow up without a mother.”

Symington said in her work she has these sorts of conversations with pregnant patients about whether to postpone chemotherapy or end their pregnancy “not frequently, but not rarely either.”

She recalled one pregnant patient diagnosed with Hodgkin lymphoma, a curable cancer of the immune system. By waiting until after she delivered her child to start treatment, the patient went from having stage 1 cancer to having stage 3 cancer and required more chemotherapy, which brought greater risk, and she faced lower cure rates.

“Some of my patients have elected, have chosen, to postpone chemo so they can give birth to the child. But that choice may soon be taken away from women,” Symington said.

MORE: Why doctors say the 'save the mother's life' exception of abortion bans is medically risky

Dr. Julie Gralow, chief medical officer for the American Society of Clinical Oncology, wrote in a column earlier this month: “For people who are diagnosed with cancer during pregnancy, already a devastating life circumstance, decisions about what treatments to pursue … are urgent and best made with an informed physician who can consider all evidence-based, scientific options, including termination.”

“Patients must be able to trust their doctors and we are therefore concerned about the potential impact of the decision that inserts the government and even lay-people into the most private and personal decisions patients face,” Gralow wrote. “The Dobbs ruling [overturning Roe] creates uncertainty and confusion that can undermine the sacred doctor-patient relationship.”

Wyoming, where Symington lives and practices, has a “trigger law” enacted in anticipation of the end of Roe — set to ban all abortion except in the case of rape, incest or when the life of the mother is at stake. The law is still being evaluated but will likely go into effect this summer. 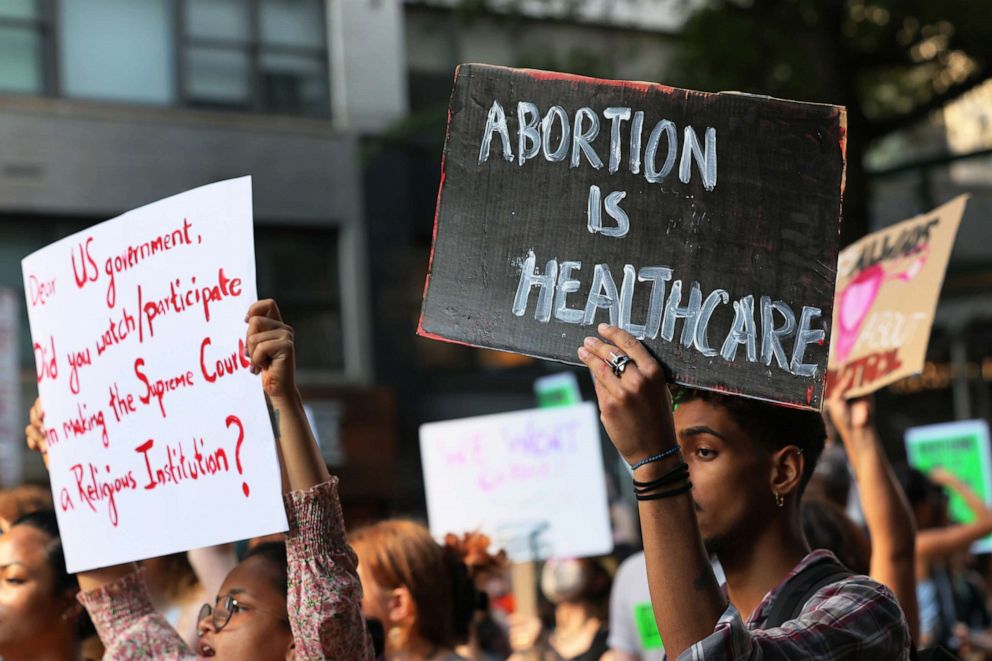 The oncologists and medical experts who spoke to ABC News for this story said they also worried that the abortion restrictions and bans could intimidate doctors, leading many to censor themselves. For example, a doctor who believes a patient's odds of surviving her cancer would be significantly improved should she terminate her pregnancy and start treatment immediately may instead chose not to give such advice — fearing prosecution — if they are in states where the abortion laws are vague and changing

Symington said she already tells her cancer patients to use contraception and avoid getting pregnant because of the heightened risks of pregnancy with cancer.

But now, she said, “I'm going to have to change that conversation to say, 'Don't get pregnant because in addition to the stress of having cancer and undergoing chemotherapy, you will have to live with the stress of a pregnancy whose outcome is unknown to you.'”

One cancer survivor in Houston who spoke with ABC News, and who asked to go by her first name, Allie, due to work sensitivities, said that while pregnant with her second child she did not feel well and her doctors began to realize it was something more than the expected morning sickness or fatigue.

MORE: Biden is weighing a public health emergency over abortion, but experts are skeptical

After a CT scan and a biopsy, Allie's doctors confirmed a terrifying complication to her pregnancy: She had cancer, and the prognosis was serious enough that they advised she start treatment right away.

But because cancer treatments like chemotherapy can damage a fetus, especially in the first trimester, Allie considered her options, including whether to have an abortion to move ahead with treatment.

“It's that power to choose for what's right for my family, for my husband, for my daughter that I already have, for my unborn child, for myself — that ability to have those options rather than it just be, 'This is the only choice you have,'” Allie told ABC News.

Ultimately, she was able to work with a team of specialists in the Houston area and developed a course of treatment she could pursue while pregnant.

She gave birth to a healthy son, who is now 4, and she's been in remission for four and a half years.

How to Spend a Perfect Weekend on Nantucket

KATIE Price is flogging her dirty and stained designer sliders for a whopping £250 ahead of her bankruptcy hearing. The former glamour model took to online second-hand clothing store Depop to try to flog the white Balenciaga shoes – which she described as being “worn with a few marks”. ...

‘World’s largest moth’ found hanging out on a garage in Washington, photos show

The moth is usually only spotted in the tropics. It’s burnt orange and bigger than an adult hand, and its species isn’t supposed to be flying around Washington. A University of Washington professor, however, found one lurking on his Bellevue garage in July. It turned out to be the world’s ...

FOOTAGE has emerged of the dramatic moment a punter is tackled to the ground and stamped on by bouncers outside a Wetherspoons. The chaotic scene unfolded outside the V-Shed Wetherspoons in Bristol, after the drinker got kicked out of the pub. The moment two bouncers tackled a man to ...


View more: Watch as Wetherspoons bouncers slam punter and stamp on him in shocking clip

A burning question is finally answered (Picture: Marvel Studios/Disney Plus/AP/Rex) Warning: spoilers ahead for She-Hulk episode 1. The release date for She-Hulk: Attorney at Law is finally here, with the MCU’s latest superhero smashing her way onto fans’ screens on Disney Plus in spectacular form. Starring Tatiana Maslany as ...

To view this video please enable JavaScript, and consider upgrading to a web browser that supports HTML5 video A new trailer has been released for Sir Kenneth Branagh’s upcoming drama about Boris Johnson, with the latest look teasing jubilation, commiseration and uncertainty in No 10 Downing Street. The Sky ...


View more: Boris Johnson parties with Tories and snuggles with Carrie in new trailer for Kenneth Branagh drama This England

James Purefoy and Sam Swainsbury, centre, are in tune (Picture: PA/Entertainment Film Distributors) Fisherman’s Friends in 2019 – essentially Local Hero with Cornish sea shanties – was one of the last homegrown sleeper hits before Covid pulled into port. This patched-up sequel/footnote feels like the British film industry trying ...


View more: Fisherman’s Friends: One And All puts the corn into Cornwall

London flooding: Where flash floods have hit as Gatwick Airport and Victoria Station disrupted by storms

DMV to change office hours across North Carolina The N.C. Division of Motor Vehicles is changing its office hours at several driver license offices across the state. Saturday walk-in service hours at 16 offices, which began on May 21, will end on Aug. 27. Beginning Sept. 6, another 10 ...

Flights were grounded again this week at a New York airport — this time because of law enforcement activity: FAA

Mahmoud Abbas reminds us that he's a rabid antisemite

Who is Nairo Quintana? Why was Colombian cyclist disqualified from Tour de France and what is Tramadol?

'Emergency Declaration' Director on COVID Providing 'Spoiler' for the Film

GOP 'tripled down' on Trump's 'toxicity' -- and 'it's making them all seem like lunatics': MSNBC's Heilemann

The Daily Sweat: Bears, Seahawks trying to find themselves as NFL preseason continues

New Moderna Covid jab to be offered on Isle of Man

'Wild' And 'Chaotic': Inside The Job Of A Nail Polish Creator