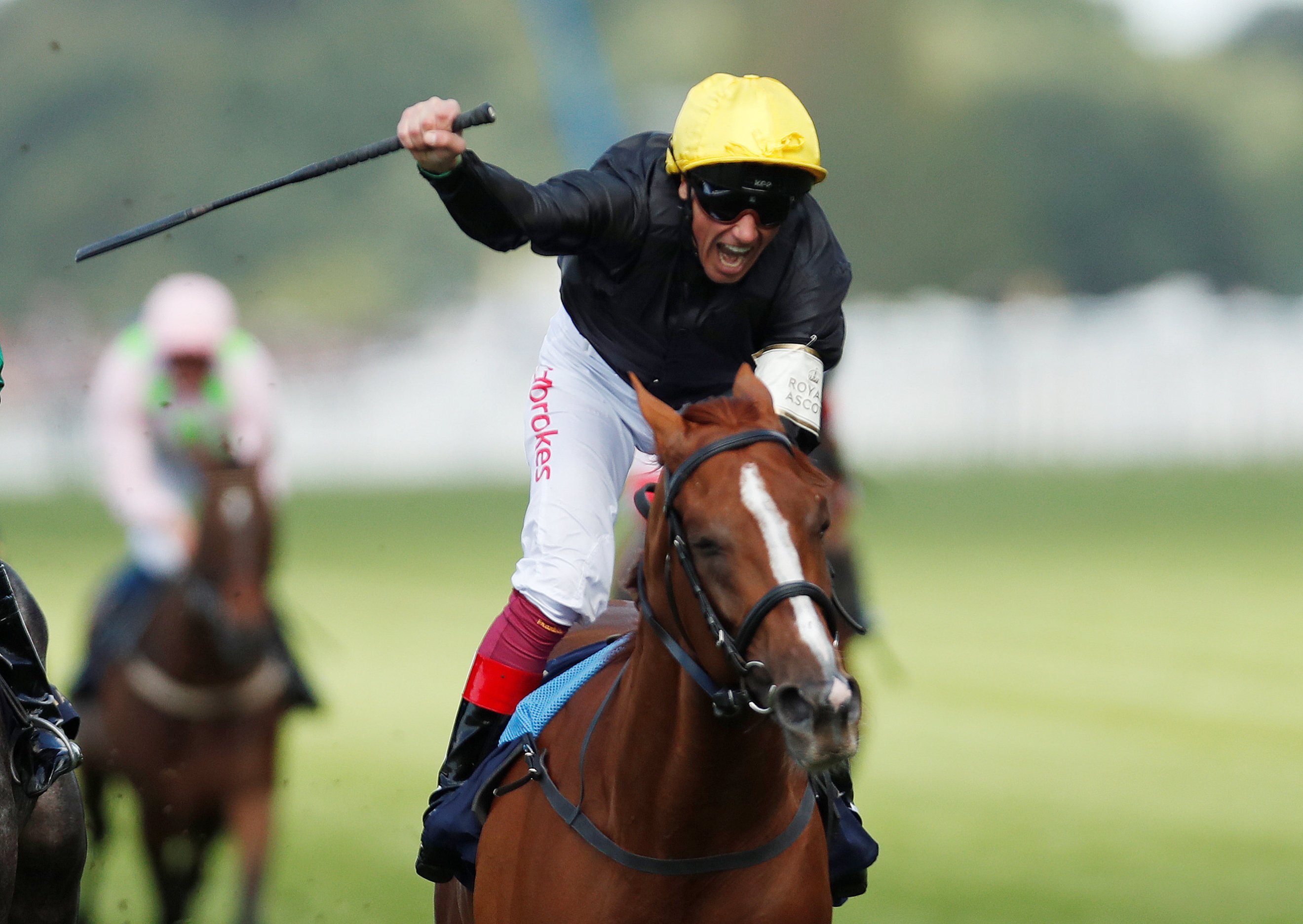 IT could be seventh heaven for Strad at York today.

And for the first time I won’t be there to share it with him. 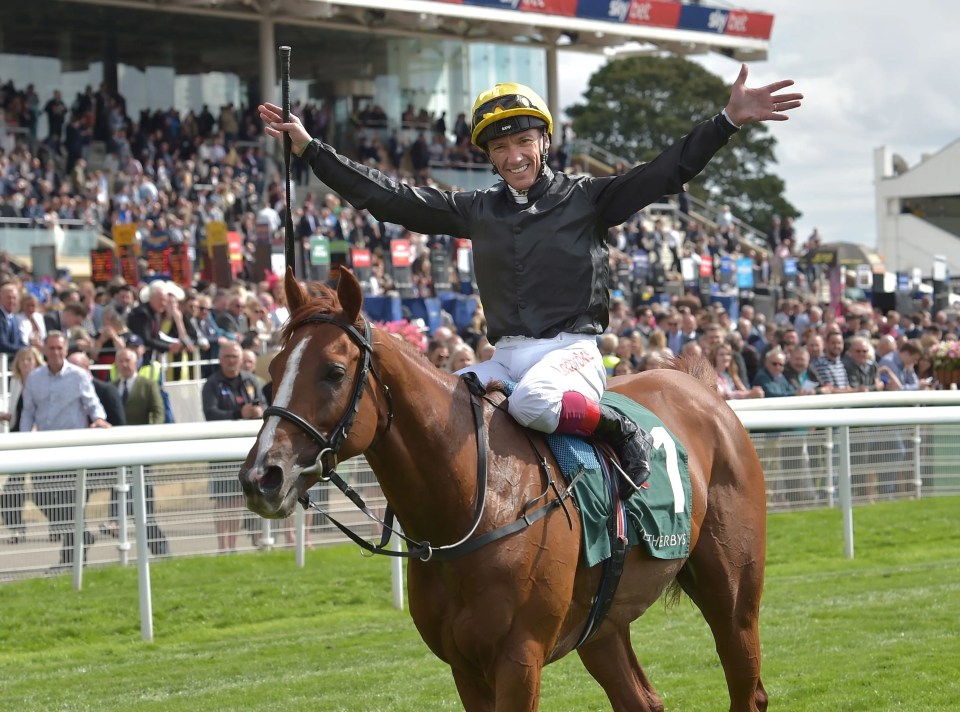 Dettori will be cheering Stradivarius from afar on Friday as he looks to set a new win record at his favourite courseCredit: Rex Features

We won all six of our starts on the Knavesmire but this time I will be cheering him on from afar.

From Newbury, to be exact, where I’ve got three rides.

Stradivarius just loves York and is one of only three horses to have won six races there.

If he pulls through today he would hold the record for most wins on the course.

It would be amazing to see him get his head in front again in a race he has already won three times and would be another record to add to his stack of achievements.

He’s coming to the end of his career now and I hope he can be enjoyed by the Yorkshire crowd one more time.

Baaeed raised the roof when he won on Wednesday and I’m sure Strad would do the same if he won.

It could be a brilliant day for his rider Andrea Atzeni, as he is also on the Nunthorpe favourite Royal Aclaim (3.35).

The two-year-old filly, The Platinum Queen, with Hollie Doyle on board, is the one I fancy, though.

She’s lightning-quick as she showed at Goodwood last time and gets a hell of a lot of weight from everything else in the field, including Royal Aclaim.

Wesley Ward’s classy Acapulco was the last two-year-old filly to try when she was second a few years ago, so it’s not an easy task for a young horse, but it’s not impossible.

Lyric Fantasy was the last filly to do it 30 years ago for the Hannons.

I’m going to Newbury to ride FRANTASTIC (3.50) for John and Thady Gosden.

He’s a full brother to Cracksman and is also owned by Anthony Oppenheimer.

We haven’t seen the best of him yet. He got caught in a pocket at Sandown last time and I don’t think the track really suited him.

Hopefully he’ll like the longer straight at Newbury and it’ll be a different story this time.

REBEL TERRITORY (2.50) isn’t a horse I know too much about, but it looked like he ran a good race in the Golden Mile at Goodwood last time.

That’s one of the toughest handicaps around so, fingers crossed, he has a nice chance off the same mark in this.

I also ride LIVALOT (3.20), owned by Emma Banks, who had so much success with Lady Bowthorpe.

She is a great character, a big supporter of racing and a good friend of mine, so hopefully we will do well here.

Frankie was speaking via Sporting Index.

Commercial content notice: Taking one of the bookmaker offers featured in this article may result in a payment to The Sun. 18+. T&Cs apply. Begambleaware.org

A responsible gambler is someone who:

Sharks vs. Predators prediction: Take a bite with San Jose


View more: Pep Guardiola insists it is too early to tell whether England star Kyle Walker will recover in time for the World Cup... as the Manchester City right-back begins his recovery after undergoing groin surgery this week

How to watch USWNT vs. England friendly at Wembley Stadium originally appeared on NBC Sports Chicago The U.S. will face England in two highly anticipated matches over the next two months. Before the two men’s squads go head-to-head in a pivotal 2022 World Cup group stage match in Qatar, ...


View more: How to Watch USWNT Vs. England Friendly at Wembley Stadium


View more: 'Do I burn it now?': Kevin De Bruyne's hilarious reaction as the Man City star is presented with a United shirt with his name and number on the back in awkward video


View more: 'How can I as a manager teach him?': Pep Guardiola explains his thumbs-up gesture to the crowd was in surprise at yet another Erling Haaland goal during Man City's Champions League win over Copenhagen

New video shows Draymond Green sucker punching Jordan Poole at practiceNews of the fight emerged earlier in the week, but the footage surfaced FridayThe clip shows Green exchanging words with Poole along the baselineThe team has already announced that Green will not be suspended Click here for all your latest international Sports news from DailyMail.com


View more: Shocking new video shows Warriors' Draymond Green SUCKER PUNCHING teammate Jordan Poole at a recent practice... but the team refuses to suspend him and says any punishment will be handled 'internally'

Petition launched to ban Haaland from PL Guardiola dismissed this suggestion Suggested his striker can actually improve WHAT HAPPENED? Haaland has made a blistering start to life in the Premier League, scoring 14 goals in the competition in just eight games. Some fans of opposition teams have already had ...


View more: Guardiola reacts after 'joke' Haaland petition called for 'robot' to be banned because it's unfair

Fans poured onto the pitch after the 3-2 win over Aston Villa.

'You're a grown man, stop shouting and bawling!' Under-pressure West Brom boss Steve Bruce is filmed confronting an irate fan for shouting 'get out my effing club' after defeat at Preston that left them in the Championship relegation zone

Golf: Fans out in force to party as LIV Invitational Bangkok tees off

Mikel Arteta rejects comparisons between William Saliba and Virgil van Dijk... as the Arsenal boss reveals he's 'really happy' with the defender's progress but wants the Frenchman to 'make his own career'

Newcastle star Allan Saint-Maximin could be back to face Brentford

Still got it! Zlatan Ibrahimovic shows off chiselled physique having just turned 41-years-old as the AC Milan forward models for Italian fashion label DSQUARED2 and shows off his own 'IBRA' line

'Play smart but play nasty as well': Erik ten Hag calls on his Manchester United stars to wise up with aggressive approach following a series of 'unnecessary' yellow cards for his side

Donny van de Beek will MISS Manchester United's trip to Everton due to ongoing 'muscle injury', confirms Erik ten Hag... as Dutch international is urged to 'fight for his position' after fitness issues

Liverpool news: Andy Robertson close to a return, Curtis Jones back in training

Jurgen Klopp: Being ‘unpredictable’ is currently missing at Liverpool

Xabi Alonso has been tracked by Bayern Munich and has a superb reputation as a youth coach... so why has he taken his first senior management role at Bundesliga strugglers Bayer Leverkusen?

Max Verstappen could win his second F1 world title amid budget cap row, but can Lewis Hamilton, Ferrari or even rain stop the Red Bull star at the legendary Suzuka circuit? SEVEN things to look out for at the return of the Japanese Grand Prix

Jamie Carragher praises William Saliba's impact at Arsenal as he admits the defender is the same 'mould' as Virgil van Dijk... but claims Gunners centre-back still has 'a LONG way to go' to reach the Dutchman's level

'I forgive you, I love you all... in Cooper we trust!': Nottingham Forest fans are delighted as owner Evangelos Marinakis pulls off a HUGE U-turn to hand manager Steve Cooper a new three-year contract just days after almost sacking him