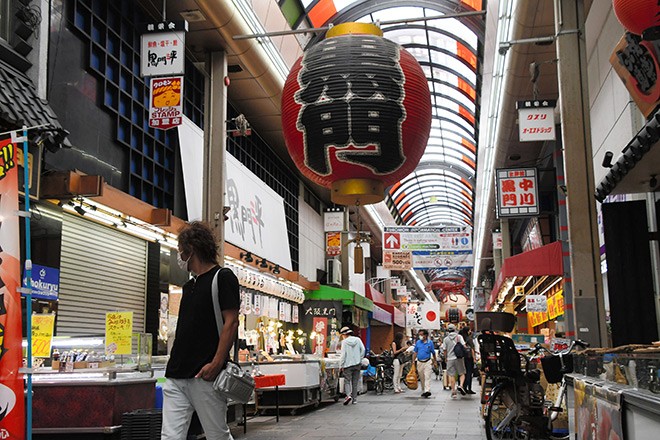 Crowds were thin at the Kuromon Market in Osaka’s Chuo Ward on Aug. 16. (Kenta Nakamura)

Japan’s eased border restrictions have resulted in a relative trickle of international tourists entering the country, a disappointing but unsurprising development in the long-struggling travel and hospitality industry.

Industry sources said travelers are put off by Japan’s remaining entry rules concerning PCR tests and chaperoned travel packages. Others noted that the COVID-19 pandemic has not gone away.

“Japan still imposes tough restrictions,” said an official of TAS Co., a Tokyo-based company that specializes in inbound trips. “It is lagging behind other countries in letting in tourists despite its claim to be a tourism powerhouse.”

Fewer than 8,000 international tourists visited Japan last month after the government lifted the ban on sightseers from abroad in June.

The continuing absence of foreign travelers was keenly felt at the Kuromon Market, an arcade lined with fish shops and eateries in the Minami district of Osaka.

Before the COVID-19 pandemic, the street was constantly packed with tourists from overseas.

“People from Hong Kong and Taiwan were among our very good customers, and I was grateful,” said Kazuo Hata, president of the company that operates the Minami shop specializing in blowfish dishes. “But almost no one has returned from there even now.”

A worker at the Funasada eatery known for its grilled eel and oysters at the market said he did not expect large numbers of returning tourists.

“The government cannot even contain the steep rise in new COVID-19 cases here in Japan,” he said. “How can we expect Chinese to come to such a country when their government is enforcing a ‘zero-COVID’ policy?”

Japan began accepting international tourists on June 10 for the first time in two years. One rule is that the entrants must come from countries and regions where the virus situation is under control.

Since July, Japan has recorded its worst infection numbers powered by a highly contagious Omicron subvariant.

The TAS official said the company arranged group tours for about 200 tourists from Singapore, Thailand and elsewhere in July.

The official said a major drawback is that Japan allows travelers to enter the country only in monitored group tours, not as individual tourists.

So instead of Japan, travelers who prefer to set their own itineraries are opting for South Korea, Thailand and European countries, according to the official.

The official also noted that some restaurants and tourist facilities in Japan are refusing to accept foreign guests as an anti-virus measure, making it more difficult for the company to arrange inbound tours.

Another hindrance is the required visa for short-term stays in Japan that was put back in place after the pandemic struck.

An official with Inside Japan, a Britain-based travel agency handling trips to Japan, said it arranged group tours for about 50 people by the end of July.

The official said there is demand for travel to Japan, but many British people choose other destinations after learning that they must go through the cumbersome visa procedures.

In addition, Japan is the only Group of Seven nation that requires entrants to present a negative PCR test for COVID-19, according to the Japan Association of Travel Agents (JATA), an industry group.

Arrivals, including returning Japanese, must show that they tested negative within 72 hours of their departure to Japan.

A JATA official said overseas travel companies have complained to the organization about the testing requirement, saying it can be extremely difficult to find testing facilities in countries that do not require pre-departure PCR tests.

“Japan’s approach is a far cry from that of the other G-7 nations,” said Hiroyuki Takahashi, chairman of the JATA.

Impediments to international travel to Japan also come from measures imposed by the tourists’ own countries.

EGL Tours Co., a leading travel agency in Hong Kong, said the number of participants in its group tours to Japan remained low in June and July.

The company said the main reason for this was that Chinese were required to remain in isolation for seven days after returning from overseas.

The quarantine requirement has been cut to three days since Aug. 12. Now, EGL Tours is seeing more reservations for tours in September and beyond.

“If the isolation requirement is lifted, tourist numbers will approach the pre-pandemic level,” said Ensan Yuen, president of the company.

The Japanese government is keen to restore the inbound travel number after seeing a dramatic decline during the public health crisis.

It set an annual goal of attracting 60 million visitors from overseas from 2030.

Keiichi Tsujino, a professor of international tourism at Ryutsu Keizai University, said that target will be difficult to achieve.

“But we can help revive the tourism industry by getting visitors to spend more, such as staying more days in Japan,” he said.

(This article was compiled from reports by Kenta Nakamura, Go Takahashi and Shinya Matsumoto.)