A former video analyst with the Vancouver Canucks has filed a human rights complaint claiming the organization discriminated against her when they fired her this fall.

Rachel Doerrie, 25, claimed the team’s assistant manager, Émilie Castonguay, made discriminatory comments about her mental health before the team fired her for an “unreasonable and flimsy” reason in September.

“Ms. Doerrie suffered damage to her dignity, self-esteem, and physical and mental health resulting from Ms. Castonguay’s comments, and her subsequent treatment by Ms. Castonguay. She also suffered financial losses arising from her unexpected loss of employment,” read the complaint filed on Nov. 22.

Castonguay and the Canucks have denied the allegations.

The Canucks hired Doerrie as an analyst in January. The complaint said she had post-traumatic stress disorder linked to a heart condition and suffered from depression, anxiety and panic attacks  — all of which she openly disclosed to the team during the interview process.

The complaint said Doerrie “never received any complaints with respect to her job performance” and was promoted in August.

In September, Canucks head coach Bruce Boudreau spoke highly of her during a news conference.

The complaint said Constonguay called Doerrie into her office the next day, concerned she had spoken to media. Doerrie said she told Castonguay she had only “politely reacted” after the reporter — a friend — texted her about what Boudreau had said.

“Ms. Castonguay responded to Ms. Doerrie’s explanation of what occurred by saying: ‘you’re not important enough to be cared about’ and ‘no one in the media is your friend,'” it continued.

“Further, and significantly, in terms of her mental and physical well-being, despite Ms. Doerrie’s strong work performance and the praise she had received from her colleagues, Ms. Castonguay told Ms. Doerrie: ‘I don’t know if you have what it takes to do the job, mentally.'”

The complaint criticized how Castonguay allegedly treated Doerrie, as another woman working in a male-dominated field.

“Ms. Doerrie expected that, as another woman who had worked hard to break into a male-dominated industry, Ms. Castonguay would have been supportive of Ms. Doerrie, and would have been careful to not exacerbate or exploit other barriers she faced, such as her disabilities,” it reads.

“It is clear, based on all of the circumstances of this case, that Ms. Doerrie’s sex and physical and mental disabilities played a role in the termination of her employment.” 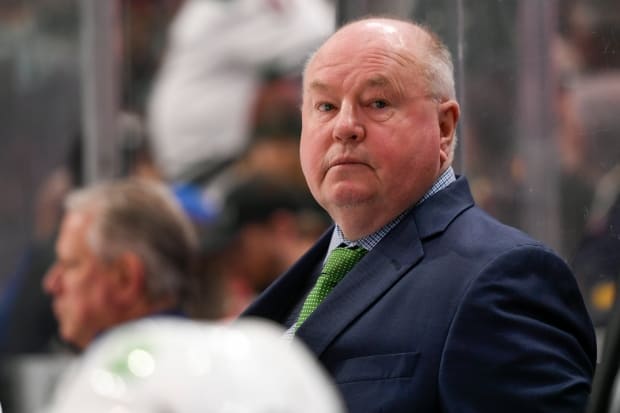 Vancouver Canucks head coach Bruce Boudreau is pictured in April. Rachel Doerrie was fired over a disagreement involving a newspaper article published after complimentary comments Boudreau made about her performance with the team.

In a statement provided by the team, Castonguay said the allegations are not true and statements attributed to her are false and inaccurate.

“I take a lot of pride in my work with the Vancouver Canucks, being a good leader, a person of high moral character, and always respecting and putting my co-workers first,” the response read.

“At no time was Ms. Doerrie treated differently due to gender, a mental disability or a physical condition.”

The Canucks organization said it “strongly” disagreed with Doerrie’s allegations.

“Our organization provided Ms. Doerrie with all the necessary resources, support and opportunities to succeed in her role. We acted in good faith and abided by our contractual obligations, both during and after Ms. Doerrie’s employment with the organization.”