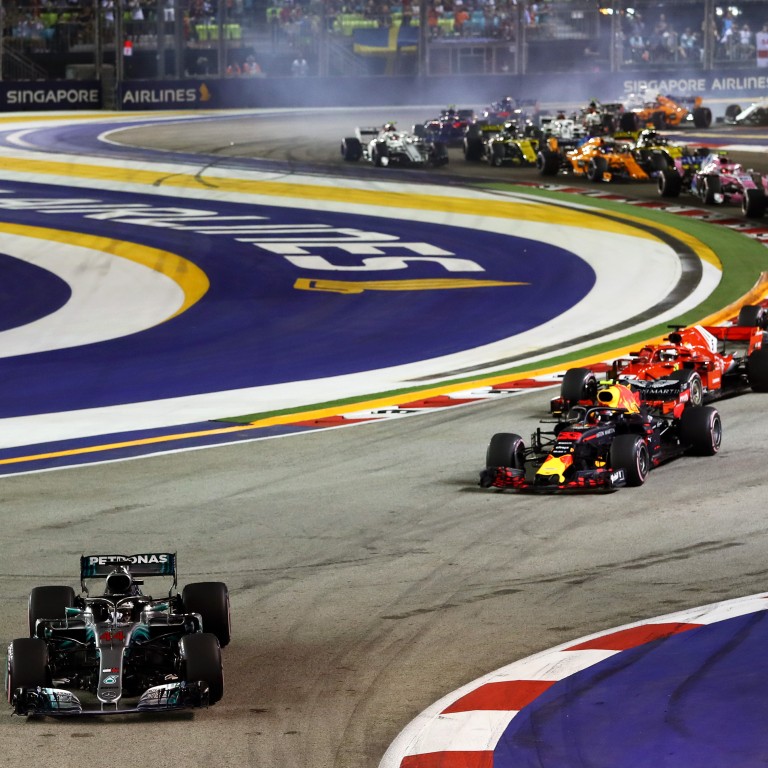 Singapore Airlines has extended its sponsorship of the Formula 1 Grand Prix in the city for three more years, the national carrier said on Saturday.

The extension will start with this year’s race in October, the company said in a statement. In January, Singapore said it would host the event after a two-year hiatus because of the coronavirus pandemic.

Formula One “will be an important milestone for Singapore, marking the return of a major international sporting event to the city after a two-year disruption due to the pandemic,” Lee Lik Hsin, Singapore Airlines’ executive vice-president for commercial operations, said.

The renewed deal also heralded the country’s determination to woo back tourism as it recently lifted most rules for fully vaccinated travellers and eased other domestic restrictions, in line with its policy to live with the virus.

Air-passenger traffic to Singapore reached 400,000, or 31 per cent of pre-Covid levels, in the week ending April 17, according to latest data from the country’s civil aviation authority.

Singapore Airlines first signed as the title sponsor in 2014 for four years, and subsequently extended it in 2018 and 2020 for two years respectively.

Formula 1’s popularity has continued to grow and the sport is enjoying a strong start to the 2022-23 season, highlighted by record viewing figures in the US for the inaugural Miami Grand Prix last weekend.

The Netflix behind the scenes docu-series Drive to Survive has been credited with fuelling Formula One’s rising popularity in the United States, a market the sport had previously struggled to crack.

Arsenal: Lucas Torreira at an impasse as agent admits Fiorentina transfer talks on verge of collapse

Crystal Palace emerge as contenders to sign Sam Johnstone after he left West Brom on a free... with the stopper keen to play regular football in a bid to make England's World Cup squad

Does Vincent Kompany know what he's getting himself into? Relegated Burnley are facing a mass player exodus and they're in financial chaos too... the Man City legend is yet to prove himself as a boss and the Turf Moor job is a risk for BOTH parties

Young boy is left in tears after racket thrown in anger by Irina-Camelia Begu bounces into the crowd during French Open clash... before angry opponent Ekaterina Alexandrova then smashes a ball out of the court after umpire fails to disqualify rival

EXCLUSIVE: Tottenham place £25m valuation on Harry Winks with home-grown midfielder set to LEAVE north London this summer - and Southampton and Newcastle lead the race for the 26-year-old

Thomas Tuchel wants to bring in a new left-back this summer (Pictures: Getty Images) Chelsea are keen to sign Brighton defender Marc Cucurella this summer but have been told they will have to stump up a massive fee for the 23-year-old, according to reports. As soon as the west ...


View more: Rangers place a £25m price tag on defender Calvin Bassey as the Europa League finalists look to ward off interest with Aston Villa and West Ham among those chasing the Nigerian international

Sportsmail understands Brennan Johnson is top of Everton's summer wishlistAn offer for Johnson will be shaped by Forest's fate in the play-off final Should Forest win then the Wales international will open talks over a new dealIf Forest to lose then his departure would appear likely, with a £20m fee mooted


View more: Everton eyeing move for Nottingham Forest star Brennan Johnson after achieving survival - but an offer for £20m-rated 21-year-old will depend on outcome of Championship play-off final this Sunday

'It's true... which is sad': Sadio Mane thinks that African players are unfairly overlooked for the Ballon d'Or as he looks to become the first player from the continent to win the prestigious prize since George Weah in 1995

Africa's last winner of the Ballon d'Or was George Weah nearly 30 years ago Sadio Mane has had a great 2022, leading Senegal to the African Cup of Nations He hopes to win the Champions League and says Ballon d'Or would be a bonus


View more: 'It's true... which is sad': Sadio Mane thinks that African players are unfairly overlooked for the Ballon d'Or as he looks to become the first player from the continent to win the prestigious prize since George Weah in 1995

Ollie Robinson's England career is in jeopardy after ANOTHER injury setback, as bowler pulls out of County Select XI warm-up game against New Zealand with back issue


View more: Ollie Robinson's England career is in jeopardy after ANOTHER injury setback, as bowler pulls out of County Select XI warm-up game against New Zealand with back issue

Lewis Hamilton faces a BAN from racing at Monaco this weekend if he refuses to take out his nose piercing, with FIA's grace period almost over and all eyes on Brit to see if he keeps stud in ahead of Friday's first practice

Lewis Hamilton turned up at Monaco with a nose stud, which is against the rulesSeven-time champion appeared to defy the FIA's ban on jewellery in the cockpit Hamilton was given a grace period of two races to remove the piercing  The exemption runs out on Friday so all eyes will be on the British driver


View more: Lewis Hamilton faces a BAN from racing at Monaco this weekend if he refuses to take out his nose piercing, with FIA's grace period almost over and all eyes on Brit to see if he keeps stud in ahead of Friday's first practice

Bike rides around the Medford Lakes, a career-accelerating teenage growth spurt and invaluable family support: Meet the ‘Medford Messi’ Brenden Aaronson as Leeds snap up US star in £22m deal

England line-up 21-year-old Northampton Saints star Tommy Freeman as lucky No 13, with his versatility and 6ft 2in frame convincing Eddie Jones he could be Manu Tuilagi's successor

EXCLUSIVE: Jordan Henderson and his dad embracing after winning the Champions League is the stand-out image of his increasingly glorious career... now the Liverpool captain wants to win it again for the man who he owes all of his success to

Liverpool are hopeful that their work with German neuroscientists can help make the difference in the Champions League final as it did at Wembley... with Jurgen Klopp hailing the 'incredible impact' they have had on set-pieces and penalties

John Toshack is loved by Liverpool and Real Madrid after spells at both clubs... the Champions League final will be poignant for the Welshman as he fights through the aftermath of Covid

EXCLUSIVE: 'We maybe paved the way to what they have now': Liverpool hero Alan Kennedy on being a flying full-back, his 60 second medical and his shock winner on the day that Real Madrid last lost a Champions League final

Davide Ancelotti is Carlo's son and his No 2 at Real Madrid as they plot to beat Liverpool in Paris - he speaks five languages, has his father's human touch and looks destined to emulate him as a boss

Arsenal's £3m swoop for Sao Paulo wonderkid Marquinhos is heading towards a bizarre legal battle... as the 19-year-old has ALREADY signed a pre-contract agreement with Wolves

French Open: Halep experiences panic attack during match against China’s Zheng Qinwen – ‘I didn’t know how to handle it’

Qatar again for Hong Kong’s frequent flier Angel Wong? It could earn her sport some miles

Formula 1: Zhou Guanyu out to make more happy memories in Monaco, while Leclerc looks to finish race for first time

Jose Mourinho takes in the jubilant scenes as he waves to Roma fans outside the Colosseum during their bus parade... with thousands gathering to celebrate the club's first European trophy in 60 years

'If you don't put the cherry on top, no one will remember what happened before': Real Madrid legend Iker Casillas warns Los Blancos must cement incredible run to the Champions League final with victory

'I didn't know how to handle it… but now I'm good': Simona Halep admits to suffering a panic attack during shock French Open exit - as Tim Henman praises former world No 1 for speaking so candidly about it

Everton's Salomon Rondon targeted by Real Mallorca, with 32-year-old's future at Goodison Park in doubt after just one goal in 20 Premier League games this season

Everton's Richarlison facing an uncertain future with a number of clubs showing interest in Brazil international... including Tottenham, Real Madrid and PSG

A bobbly, rock-hard pitch, his 'special' team-mates, and how the trophy ended up in the Moulin Rouge: Phil Thompson recalls his memories of Liverpool's 1981 European Cup final success against Real Madrid in Paris

'Opinions are great but stats don't lie': John Terry hits back at Rio Ferdinand after his former England team-mate only picks the ex-Chelsea captain as the FIFTH best defender in Premier League history

Rudiger and Christensen are LaLiga bound, Azpilicueta wants to join them there - and Lukaku wants talks over his future... what's next for FOURTEEN Chelsea players facing an uncertain summer?

A 'trophy' for Tottenham! Spurs win the Premier League's new 'Most Improbable Comeback' award for their turnaround at Leicester, where their 'win probability' dropped to 0.02%... before 95th and 97th-minute goals

Rafa Benitez on why Real Madrid's Karim Benzema is thriving without Cristiano Ronaldo, what it's like to win a Champions League without the best team... and how analysing 4,000 passages of play has got him hungry to return for more tough jobs

REVEALED: How the Glazers are paying themselves £11M despite Manchester United's 'disappointing' performance in the Premier League, while spiralling wages and debts means the club must take a cautious approach in the transfer market

Liverpool vs Real Madrid: So much has changed but European royalty remains the same

Ibrahima Konate grew up kicking a scrunched up newspaper around Paris... now he is back in the French capital with a shot at Champions League glory with Liverpool in what would be 'the best night' of his life

'We just want to support Erik and make him successful': Steve McClaren says Man United boss Ten Hag will bring a 'new beginning' to Old Trafford, hails his work ethic and admits working with the Dutchman is 'exciting'

'Everton are the mystery of the season': Gary Neville remains bemused over the Toffees' season after tipping them to be his overachievers at the start of the campaign and gives blunt assessment of Rafa Benitez's sacking

Smaller cars, one-off tyres and a sprinkler to water the track: Monte Carlo has the fewest overtakes of ANY Grand Prix... so with Miami rivalling Monaco for glitz, how can the famous old race be saved?

Newcastle are keeping tabs on Lyon star Lucas Paqueta, with the French club open to selling midfielder along with Moussa Dembele and Houssem Aouar after missing out on Europe

'You never know what will happen': Luis Suarez admits he hopes to play alongside former Barcelona team-mate Lionel Messi at Inter Miami one day... with the Atletico forward set to become a free agent this summer

'This was a business deal gone wrong': £35m Chelsea flop Danny Drinkwater reveals he's leaving in a frank message, admitting his 'mistakes' of fights and an arrest - but hitting out at his 'treatment'

EXCLUSIVE: It's not just the dressing room that's leaky at Old Trafford! Manchester United hire an inspector to stop water pouring through the stadium's roof after complaints from fans... with the club planning overhaul of famous ground

Serge Gnabry's 'refusal to sign a new deal with Bayern Munich has some of Europe's top clubs on alert'... 'with Real Madrid and Arsenal readying themselves for a transfer tug of war'