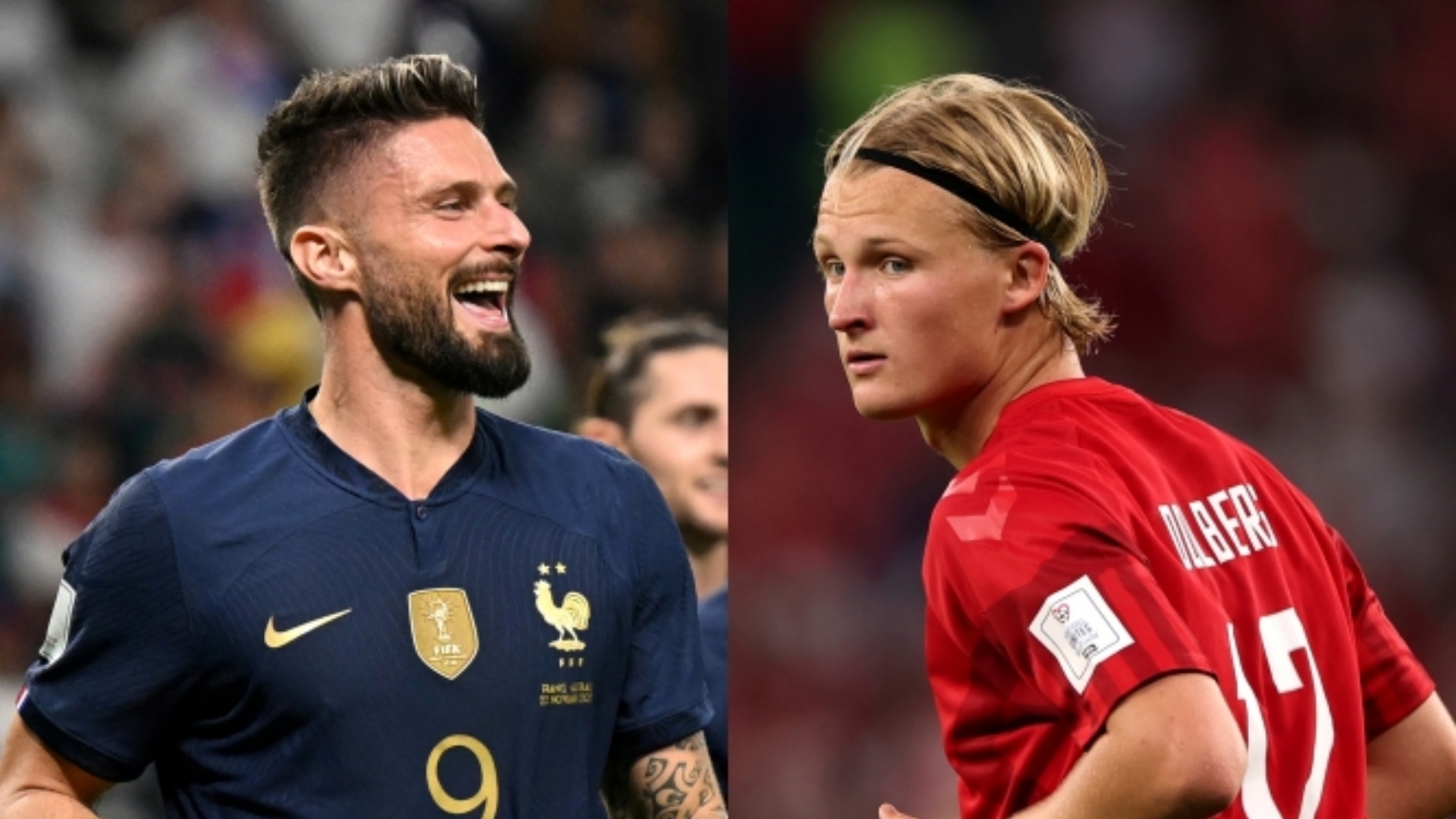 France take on Denmark in their second match in the 2022 World Cup at Stadium 974 on Saturday. Les Bleus started their campaign with a 4-1 thrashing of Australia, while Denmark recorded a goalless draw against Tunisia.

In the absence of Karim Benzema, Olivier Giroud has stepped up his game and scored two goals in the first match – one more against Denmark and he will be France’s all-time top international scorer. They are also aiming to win six games in a row at the World Cup – stretching back to Russia 2018 – which will be a first in their history.

Denmark, meanwhile, shouldn’t be daunted at the prospect of taking on the defending champions as they have won their last two encounters against France in the Nations League.

GOAL brings you details on how to watch the game on TV in the UK, U.S., Africa and India and how to stream it live online.

This page contains affiliate links. When you subscribe through the links provided, we may earn a commission.

How to watch France vs Denmark on TV & live stream online

In the United States (U.S.), the game can be watched live and on-demand with fuboTV (start with a free trial). New users can sign up for a free seven-day trial of the live sports streaming service, which can be accessed via iOS, Android, Chromecast, Amazon Fire TV, Roku and Apple TV and on a web browser.

Viewers in the US can also watch the game on the Fox Network, Telemundo and Peacock.

The match will be broadcast and streamed in the UK on ITV, STV and S4C.

In India, fans can catch it on the Sports 18 Network and stream the games on Jio Cinema.

Lucas Hernandez has been ruled out of the World Cup with an ACL injury. Kingsley Koman is also a doubt after he missed Friday’s training session with a hip problem but Raphael Varane may start in place of Ibrahima Konate.

Denmark will be without the services of midfielder Thomas Delaney as he has been forced to withdraw from the tournament after suffering a knee injury against Tunisia.

Apart from the Sevilla man, everyone else is available for selection.

‘False affidavit filed against ex-MLA Asif Khan’: Delhi court asks police officers why they should not be convicted

'It was a shocker of wicket': Hardik Pandya slams India's pitch curators in explosive statement after 2nd T20I vs NZ

Imran Khan to contest bypolls to all 33 vacant parliamentary seats

Capricorn to Scorpio: 4 Zodiac Signs Who Always Worried About Future And Think Long-Term

IndiGo Calls Poha a ‘Salad’, Netizen Schools Airline on Twitter IndiGo Airline, India’s biggest air carrier with over 50 percent market share has generated a meme-fest on Twitter over its recent social media campaign. IndiGo, on Twitter, shared a post passing off Indian breakfast ‘Poha’ as a ‘Salad’. In ...

Meet Tata Sumo Rocket: Digitally-Modified Avatar of SUV With Mercedes-Benz G-Wagen Essence Tata Sumo was once a go-to car for those looking for a multi-purpose vehicle. It was first launched in India in 1994. The MPV saw a host of updates during its course to reach discontinuation in 2019. ...

Aftercare Tips After A Manicure And Pedicure

Aftercare is an essential part of having a great manicure or pedicure. It’s important to properly take care of your nails after they have been treated so they stay healthy, shiny, and beautiful. Without proper aftercare, your nails could become dry and brittle from over-soaking. Your nail polish could start ...


View more: Aftercare Tips After A Manicure And Pedicure

Bollywood actor John Abraham, who was recently seen in the blockbuster hit Pathaan, also starring Shah Rukh Khan and Deepika Padukone, has been a part of the entertainment industry for nearly two decades now. John Abraham is known for his performances in films like Satyameva Jayate, Dhoom, Dishoom, Dostana, Romeo ...

Man Throws Bundles Of Notes In The Air At Screening Of SRK-Deepika Padukone’s Film Pathaan Shah Rukh Khan’s Pathaan has sent fans into a frenzy ever since it hit theatres on January 25. The film has won the country and there’s much proof of it on social media. As ...

If population control law is not enacted now, Ram temple will not be safe: Hindu leader Praveen Togadia

Quinton de Kock might not come to play the IPL if he sees this pitch: Gambhir takes cheeky dig at Lucknow wicket

'Let me touch it': Ankit Gupta recalls 'shocking' casting couch experience, says he was asked to 'compromise' for work

‘No country like India’: Top Sunni cleric says even Gulf countries don’t offer this much freedom for Islamic work

After $200-million move to Saudi club Al-Nassr, Cristiano Ronaldo might return to Europe

Malaika Arora shows you how to do Chakrasana to relieve stress and tension. Watch video

Morgan Stanley Capital International is yet to reach out: Adani Group CFO | Exclusive

OnePlus Pad design officially teased for the first time, here is a closer look at it

Are you eating fruits before going to bed? STOP! Know the right time to eat fruits

Karnataka girl's hair gets stuck in giant wheel, scalp comes off like a wig

Google employees who survived layoffs are worried, asks top bosses if their job is safe

Can you suffer a heart attack while sleeping?

What’s on Chandigarh: Photo exhibition ‘Lessons from a Passport’

Vijay's Thalapathy 67 with director Lokesh Kanagaraj to release on October 19?

Adani Enterprises FPO gets bids for 5,59,544 shares on Day 2 so far; here's what group CFO says

Cristiano Ronaldo’s new manager says ‘he will not finish his career at Al-Nassr, he will return to Europe’