So much for momentum.

If the Yankees’ dramatic, extra-inning win over the Rays on Wednesday was a spark, another tough pitching performance from Frankie Montas promptly poured cold water on it Thursday.

Montas was tagged for six runs over six innings — including a five-run second inning — as the Yankees fell flat in a 9-2 loss to the Blue Jays in The Bronx. 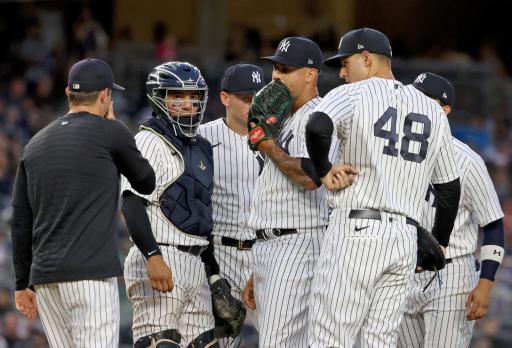 Pitching coach Matt Blake talks with Frankie Montas during the second inning of the Yankees’ 9-2 loss to the Blue Jays.

The offense that had shown signs of snapping out of its recent funk 24 hours earlier wasn’t much help, either, as Jose Berrios kept the Yankees’ bats in check across 6 ²/₃ innings. The Yankees went 1-for-10 with runners in scoring position and left eight men on base. The only real bright spot was rookie Oswaldo Cabrera collecting a pair of hits, including the first of his big-league career.

Blue Jays leadoff man George Springer served as a thorn in the Yankees’ side, going 5-for-5 with two runs and an RBI.

Throughout the Yankees’ recent offensive malaise, their starting pitching had quietly been strong — allowing three runs or fewer in each of its past nine games before Thursday with a 3.07 ERA. That changed on Thursday, though, as Montas struggled early and put his team in a 5-0 hole in the second inning.

In three starts since joining the Yankees from the Athletics at the trade deadline, Montas has given up 14 earned runs on 18 hits and six walks across 14 innings.

Montas worked around Springer’s leadoff double in the first inning but ran into trouble in the second. Teoscar Hernandez singled and Matt Chapman doubled before Santiago Espinal grounded into a fielder’s choice that put the Blue Jays up 1-0.

Montas’ costliest mistake came next, when with two outs he walked No. 9 hitter Whit Merrifield on four pitches. That turned the lineup over to Springer, who hit a bloop single to center field to make it 2-0. 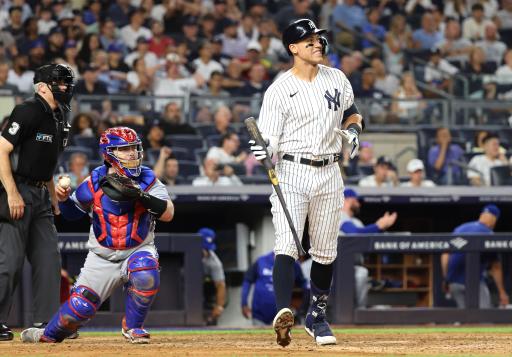 A dejected Aaron Judge walks to the dugout after striking out in the seventh inning of the Yankees’ loss.

Vladimir Guerrero Jr. then took a visit to the short porch, roping a three-run home run to push the Blue Jays’ lead to 5-0.

The Yankees chipped away at the deficit in the third inning, with Berrios’ throwing error on DJ LeMahieu’s infield single bringing in a run and Aaron Judge driving in another on a fielder’s choice. 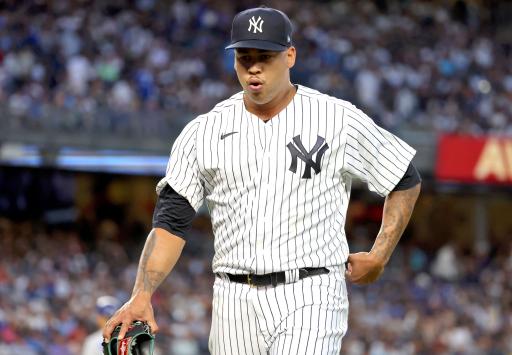 A downcast Frankie Montas walks off the mound at the end of the second inning in which he gave up five runs.

But the Blue Jays got to Montas for another run in the sixth inning to make it 6-2 before blowing the game open with three runs off Albert Abreu in the seventh.

Cabrera recorded his first career major league hit in the fifth inning, smoking a 107.5 mph line drive to center field and hustling to second for a double. He later added a single in the seventh inning while going 2-for-4.

Cabrera also looked smooth in his first start at shortstop after playing third base in his MLB debut on Wednesday.