Freddie Flintoff’s Field of Dreams is a new series that sees the sportsman and presenter try to start a cricket club in his hometown of Preston.

The series, which starts on BBC One on Tuesday 5 July, is three episodes in total.

Here’s everything you need to know about Freddie Flintoff’s Field of Dreams.

What is it about?

With two-thirds of England’s current cricket team privately educated, Freddie Flintoff is one of relatively few working-class athletes involved in the sport.

This new series sees Flintoff try to start a cricket club in his home town of Preston, to try and foster more local engagement in the sport and to redress the balance in cricket more broadly.

As the official BBC synopsis explains, “for today’s young generation the opportunity to take Freddie’s path is unlikely, and he wants to change that.”

“Flintoff heads back to his hometown of Preston to start a new cricket team with an unlikely group of teens.  He’s determined to prove that anyone can play competitive cricket whatever their background. Undeterred by the somewhat negative reception to his idea, he holds try outs and starts a training regime with a group of lively teenagers.”

Who is Freddie Flintoff? 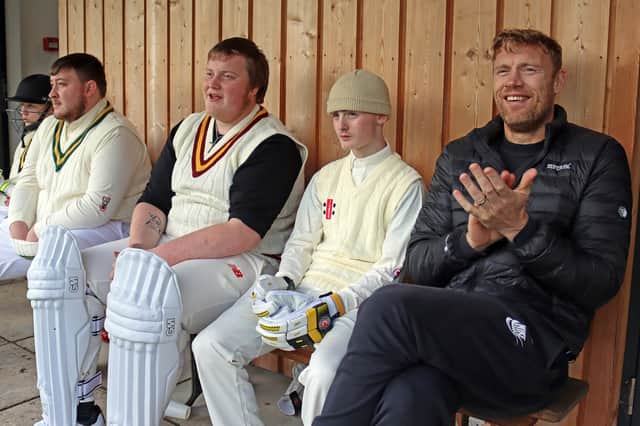 Andrew Flintoff – Freddie is a nickname – is a television presenter and former international cricket player. He started playing cricket professionally in 1995, at the age of just 18.

As a cricketer, he was one of the sport’s leading all-rounders: a fast bowler, a middle-order batsman, and a slip fielder.

Since retiring from full-time cricket in 2010, Flintoff has gone on to become a television presenter and personality. He’s probably best known as one of the presenters of Sky’s A League of their Own, and of BBC One’s current iteration of Top Gear.

Where is Freddie Flintoff from?

Flintoff is from Preston, which is a city in Lancashire. He grew up there, attending Ribbleton Hall High School (since renamed City of Preston High School) and playing many of his first cricket games with the Lancashire Schools under-11s and under-15s teams.

Is there a trailer for Freddie Flintoff’s Field of Dreams?

Yes, there is! Production company South Shore, the team behind the show, shared this trailer on twitter.

A longer clip from the series, which sees Freddie Flintoff connecting with some of the teen players, has also been released. You can watch that here.

How many episodes is Freddie Flintoff’s Field of Dreams?

There are three episodes in Freddie Flintoff’s Field of Dreams.

In the first episode, Freddie and the team play their first practice game, after only a few short weeks of training.

In the second episode, Freddie takes steps to arrange funding for the team – while a surprising new addition to the team and general teenage antics make their path forward a little more complicated.

In the third and final episode, Freddie and the team are ready for their big match against a local private school. Who will win – and will Freddie be proven right that anyone can play cricket?

Why is he called Freddie Flintoff if his name is Andrew?

It was a nickname given to him by a coach, the idea being that Flintoff sounded like Flintstone – hence Freddie like Fred Flintstone.

Why should I watch Freddie Flintoff’s Field of Dreams?

It’s one to watch if you’re a fan of Flintoff as a presenter (or as an athlete). It also looks set to be an interesting and informative look at the role class plays in sport – while also being entertaining too.

Representational image. PTI New Delhi: India saw a single day rise of 15,754 new coronavirus infections taking the total tally of COVID-19 cases to 4,43,14,618, with the active cases increasing to 1,01,830, according to the Union Health Ministry data updated on Friday. The death toll climbed to 5,27,253 with ...

Food Friday For the United Kingdom, India is the flavour of the season. Geetanjali Shree’s novel, translated from its original Hindi to English by Daisy Rockwell, won the International Booker Prize; Rishi Sunak, son-in-law of Indian tycoon Narayan Murthy, is one of the top contenders for British Prime Ministerialship; ...

One of Lata Mangeshkar’s personal favourite songs was Aap yun faaslon se guzarte rahen dil se qadmon ki awaaz aati rahi from the film Shankar Hussain. She would often talk about this song: “It is one of the most beautiful songs I’ve sung. It is commonly known that Khayyam ...

Former Trump CFO Allen Weisselberg departs from the courtroom in Manhattan Supreme Court, he has agreed to plead guilty to 15 felonies, admitting that he conspired with Mr Trump's company to avoid paying taxes. AFP New York: The numbers guy did the math: Allen Weisselberg — a long-time loyal ...


View more: Donald Trump loyalist pleads guilty to tax fraud: What this means for the former US president

Eberflus explains why he didn’t challenge Coutler catch originally appeared on NBC Sports Chicago The preseason isn’t just for the players to install their scheme, or to fight for a roster spot, it’s for the coaches too. They work on communication, and practice various scenarios, like whether they’re going ...

Shares of Tata Chemicals hit a new high of Rs 1,182.40 afer they rallied 6 per cent on the BSE in Friday's trade on strong business outlook. The stock of the Tata Group's commodity chemicals company surpassed its previous high of Rs 1,159.95 touched on August 12, 2022. In ...

Shares of Indian Railway Catering and Tourism Corporation (IRCTC) jumped to a high of Rs 741.90, up over 4 per cent in intra-day trade on Friday on the BSE, as the company announced plans to monetise its passenger data bank. In the last two trading sessions alone, the stock ...

BJP to stage protest against rising crime in Rajasthan on Saturday