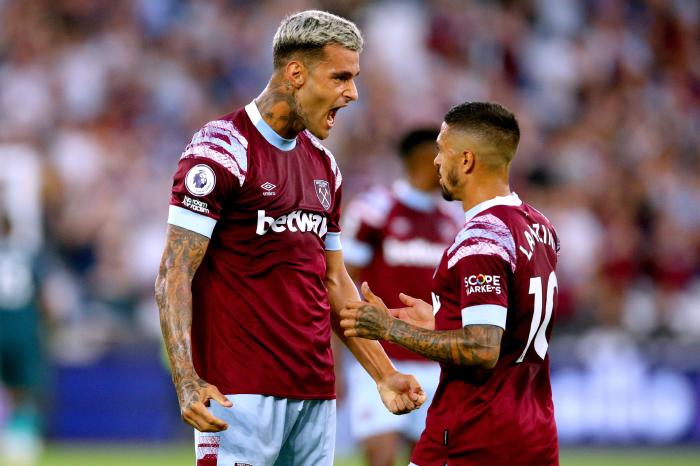 Jarrod Bowen added a second after the break and although Viborg pulled one back, Michail Antonio rounded things off with the third.

It gave the Hammers some breathing space ahead of the second leg of this qualifying play-off in Denmark next week as they bid to make the group stages of the Europa Conference League.

West Ham were without Declan Rice and Aaron Cresswell, as well as Moyes, with all banned for various indiscretions in the agonising Europa League semi-final defeat to Eintracht Frankfurt in May.

It had also been a tough build-up for Viborg for what was probably the biggest night in their history after two players, Nigerian winger Ibrahim Said and Gambia forward Alassana Jatta, were denied entry into the country due to visa rules post-Brexit.

Nevertheless, burly striker Jay-Roy Grot was proving a handful up front for the visitors, especially for stand-in Hammers skipper Angelo Ogbonna who was making his first appearance in nine months after a cruciate injury.

But Moyes watched on from the stands as almost £50million worth of his summer acquisitions combined to give West Ham a 24th-minute lead.

Former Burnley winger Cornet worked his way to the byline, cut back inside and lifted over a cross for Scamacca to head home at the far post.

Viborg were providing a sporadic threat and when Cornet gave the ball away Grot was sent through on goal, with Alphonse Areola racing out to save with his legs.

The second goal arrived in the 64th minute when Bowen picked the ball up 30 yards out, surged forward and pinged a low drive into the corner. 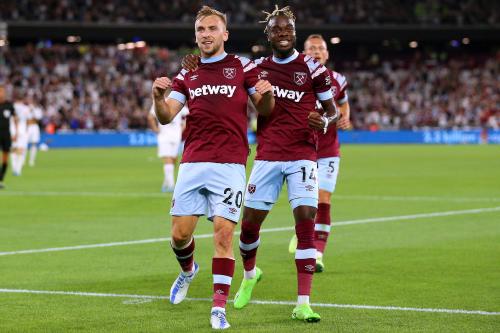 But four minutes later Viborg halved the lead through a far-post header from Jakob Bonde.

Areola was forced into a flying save from Nils Mortimer to prevent the Danes from drawing level before Antonio scored the third with tap-in from fellow sub Said Benrahma’s pull-back.

Jennifer Aniston ensured she kept up her workout regime as she headed out for a jog between filming scenes for The Morning Show. The 53-year-old actress looked in good spirits as she set off for her run in the early  hours ahead of filming in Brooklyn on Thursday. The Friends star ...


View more: Jennifer Aniston keeps fit on the set of The Morning Show as she heads for a jog before catching up with co-star Reese Witherspoon

SINGAPORE – There has been a 35 to 40 per cent increase week-on-week in coronavirus cases over the past few days, the Ministry of Health (MOH) said on Friday, in a fresh warning as the nation transitions to living with the virus. Driven primarily by an increase in infections ...

Greg Abbott and Beto O'Rourke set to debate: What to expect Polls indicate that O'Rourke has more work to do with voters. On Friday — for the first and only time — Texas Republican Gov. Greg Abbott and his Democratic challenger, former Texas Rep. Beto O'Rourke, will meet face-to-face for ...


View more: Greg Abbott and Beto O'Rourke set to debate: What to expect

The government said the "emergency response phase" of the pandemic was finished and they needed to find different ways of dealing with the virus.


View more: DALL-E is now available to all. NPR put it to work

Del Ray Grant Morrison’s Luda is a wildly entertaining drag show of the highest intellectual order. No, scratch that: It is a blitzkrieg of ideas wrapped in a celebration of language. Wait, that doesn’t do it justice. Luda is a narrative concerned with the passage of time and the ...


View more: 'Luda' isn't a book you read — it's a book you experience

Katie Holmes looked effortlessly stylish and chic as she enjoyed a date night with new boyfriend Bobby Wooten III in Paris on Thursday. The Dawson’s Creek star, 43, wore a pair of flared jeans and a leather jacket as she stepped out with her man. The pair were spotted leaving the Costes ...


View more: Katie Holmes looks casually chic in a pair of flared jeans and a leather jacket as she enjoys a romantic date night in Paris with boyfriend Bobby Wooten III

Euro zone inflation hit a new record high of 10% in September, Eurostat data showed on Friday, up from 9.1% in August and above consensus projections of 9.7%. The reading, which also showed price increases broadening out from volatile food and energy prices into nearly all segments of the ...

Erling Haaland 'might only stay at Man City for two and a half YEARS', claims his dad Alfie and admits the forward 'wants to test out every league' before he retires... as he reveals his son NEVER considered a move to Man United

CO2 monitors to be mandatory in all Dutch classrooms

Football: Nagelsmann 'not responsible for everything' amid Bayern's league struggles

Erik ten Hag was 'Mini Pep' at Bayern and said chatting tactics on adjacent training pitches with Guardiola was 'like a lottery win'... Now once-mooted City successor is plotting his downfall at United