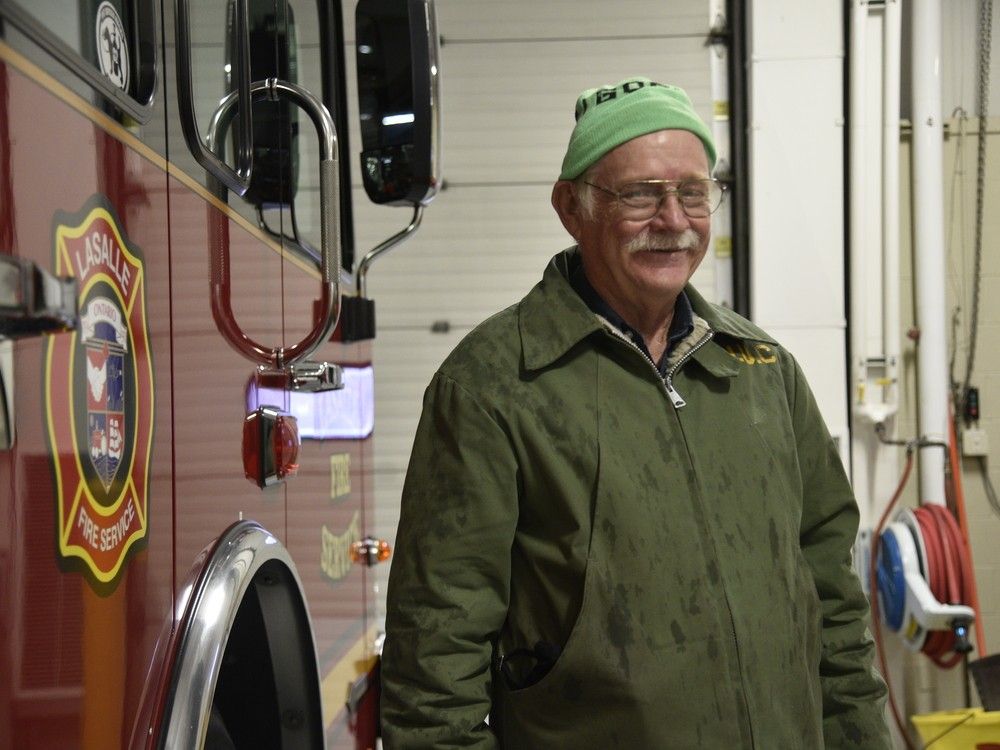 Danny Curtis from LaSalle at the LaSalle Fire Station on Sunday, Nov. 27, 2022. A longtime Goodfellows newspaper drive volunteer, Curtis recently went viral for his act of kindness sparking a $500 donation to the Goodfellows.

Danny Curtis was almost done his shift canvassing for the Windsor Goodfellows charity newspaper drive Thursday when one act of kindness changed everything.

Curtis, 70, has gone viral after  Windsor-area TikToker posted a video featuring Curtis’s act of kindness during the annual newspaper drive, run in partnership with the Windsor Star.

“Things just happened so fast and so my feet still haven’t touched the ground, I don’t think,” Curtis said.

It all unfolded Thursday morning when Zachery Dereniowski, who goes by mdmotivator on Tiktok, approached Curtis after noticing him canvassing for the Goodfellows in the parking lot a LaSalle Tim Hortons.

In a video that now has nearly 30 million views, Curtis explains the newspapers are sold by donation to help the Goodfellows feed the hungry.

When Dereniowski replied that he didn’t have any change, Curtis offered him a paper anyways and said he’d make a $2 donation out of his own pocket.

From there, things took a turn for the unexpected.

“(Dereniowski) reached in his pocket. He pulled out $500,” Curtis said. “He says, ‘I’d like to donate this to the Goodfellows.’ I said, ‘Wow,’ and I broke down and cried right there.

“I was there at the right time and the right place.”

Dereniowski then offered Curtis himself a matching $500 gift, which he declined, though Curtis said the pair will go for breakfast sometime.

Curtis has been volunteering with the Windsor Goodfellows newspaper drive alongside the LaSalle fire department for “many years,” he said. A friend pegged it at more than two decades.

He almost wasn’t going to volunteer this year. But when Tim Hortons on Malden Road welcomed the Goodfellows and Curtis was offered the quieter spot — volunteers famously canvas at busy intersections around Windsor and Essex County — he couldn’t resist.

“It was just something to do, it brought (me) into the Christmas spirit, and that’s what I was looking for all along,” Curtis said.

Jennifer Wells, executive director of the Windsor Goodfellows, said she couldn’t have said it better herself.

“Danny was able to share so purely our message, completely unprompted,” Wells said. “Danny was in the right place at the right time with the absolute right message.”

Donations coming in through the newspaper drive were down this year, Wells said. But it’s not all bad news.

“With Danny’s video we’ve been seeing our online donations go up for the first time ever,” Wells said, noting people can make donations electronically any time. “We’re hoping with the love from our community we’ll meet our goals this year.”

The Goodfellows provide a host of programs for people in need including a food bank, breakfast program and most famously, Christmas meal hampers. Despite having a reputation as a holiday-season charity, the Goodfellows actually operate food programs all year and need, as well as food costs, have skyrocketed, Wells said.

Dereniowski told the Star he frequently makes social media videos rewarding random acts of kindness — often he’ll ask a stranger for a favour, and when they oblige, reveal a gift or cash instead. He wanted to shine a light on the Goodfellows this year, he added.

“There’s not a better epitome of what a Goodfellow is than Danny,” he said.

“It’s really important during the holidays to be kind and if we can all just take a little bit of Danny with us wherever we go, I think the world would be a better place.”

Curtis said he has just one wish for the holiday season.

“I just want to bring in some Christmas spirit and maybe put some food on (the table) for some people who can’t afford it and bring some happiness to them,” he said.

“Peace on earth and happiness for everybody would be wonderful … if everybody could stay well that would be the most precious gift in the whole world. Wish everybody a merry Christmas.”

While the 2022 newspaper drive has wrapped up for this year, the Goodfellows continue to accept donations online anytime from now until Christmas. Donations can be made by e-transfer, text-to-give by texting “ Goodgive” to 45678 or online through windsorgoodfellows.org .